An analysis of the socio-environmental conflict in the course of the regeneration process of Prati di Caprara in Bologna (Italy): how urban political ecology can help us framing the politics and nature of urban forests.

At the end of November the first World Forum on Urban Forests, promoted by the Food and Agriculture Organization (FAO) and organized by local institutions and academic organisations, was held in the italian town of Mantova. The event included three days of conferences, debates and meetings to discuss the strategic role of forests, woods and green areas in urban spaces worldwide. Moreover, the relevance of these entities with regard to climate change mitigation, biophysical, ecologic and health benefits was highlighted together with an emphasis on sustainable development and green growth.

It is relevant to reflect on the fact that, despite the widespread awareness of socio-ecological benefits of urban forests emerged during the Forum, urban transformations over the last decade have been mostly oriented towards the development of new infrastructures – such as residential, trading areas and business districts – rather than towards the preservation and (re)creation of woods and green areas.

When considering the strategic nature of urban space, in terms of commercial value and capital investment, it is useful to reflect on how urban transformation processes embody power relations, political visions and interests. Therefore, the preservation of an urban forest, rather than the construction of a shopping mall in urban strategic areas, is a highly political issues. Indeed, it is not by chance that these reconfigurations often lead to urban socio-environmental conflicts.

In the framework of the Mantova’s Forum, dominated by architects, urban planners and forestry experts, the political nature of urban forests was not deepened enough. Here, I turn to the approach of urban political ecology to enable a critical reflection on urban regeneration processes, their inherently political and power-laden nature, and the related socio-ecological dimensions and struggles.

By applying this approach, urban forests could be considered as the materialization, on the one hand, of complex bio-physical processes, and, on the other, of multi-scalar socio-political and economic dynamics, as argued by Sandberg et al. (2015) in their recently published monograph. By adopting this approach, the next section explores the socio-environmental conflict emerged in relation to the urban forest of Prati di Caprara in Bologna (Italy).

The urban forest of Prati di Caprara: between regeneration and conflict

The area of Prati di Caprara is located in the western part of Bologna, the capital town of Emilia-Romagna region (Northern Italy), not far from the city centre. Over the last century, Prati di Caprara, which measures 47 hectares and is divided into two parts, east and west, has gone through heterogeneous transformations. Whereas at the very beginning of the XX century it was used for agriculture, since the 1940s the area became a military site progressively abandoned during the 1970s.

Over the last four decades Prati di Caprara has been characterized by a significant renaturalization process, which enabled the growth of a urban forest covering today the majority of the eastern side and part of the western one. Due to complex historical, political and socio-ecological process, the urban forest represents today a great example of a socio-environmental entity within the urban space. Whereas for decades Prati di Caprara has been not considered by the political agenda, since 2016 it became strategic in the political discourse of urban regeneration processes oriented towards the reconfiguration of industrial and military abandoned areas. 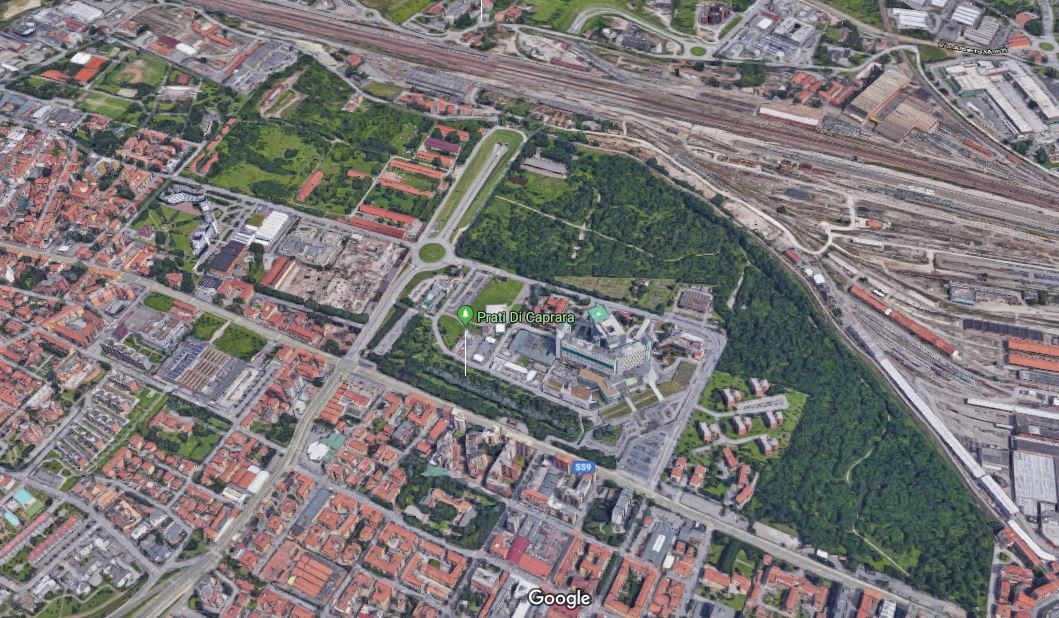 The political discourse relied on the concepts of sustainability, resilience, inclusive governance and participation, despite the local municipality (Comune di Bologna) produced a strategic document for urban regeneration (POC) without the participation of citizens. POC contemplated a quite radical transformation of Prati di Caprara area, officially owned by state enterprise INVIMIT, through the construction of new infrastructures, such as a fashion mall, residential and commercial buildings, a school and a new park. This transformation would imply the eradication of most of the forest.

Behind the urban regeneration project of Prati di Caprara as devised by the municipality, national and multinational enterprises – such as ECE, SECI Maccaferri group and others –  played a key role in shaping the project while moving forward their interests. Indeed, these actors would be compensated with the Prati di Caprara area by the municipality, in terms of rights for urban development, in exchange for the renovation of the main city stadium.

Although abandoned and inaccessible, the urban forest of Prati di Caprara was threatened by the POC and by the interests of the private actors; indeed, an effective public and open debate on the progressive transformations of the area was almost denied. Due to these issues, since April 2017 citizens and activists living in the nearby neighborhood have supported the creation of the Rigenerazione No Speculazione, a socio-environmental movement with the aim of protecting and valorizing the urban forest by raising public awareness on the speculative nature of POC.

By criticizing the centre-left municipal council, Rigenerazione No Speculazione claimed the ecological and social values of the urban forest by highlighting its role in pollution reduction, improvement of air quality and climate change mitigation. At the same time, the civic movements defended the forest as a common resource against real estate speculation and against the privatization of urban spaces.

Over the last year, the movement has organised several initiatives to raise public awareness and strengthen its power, such as a participatory process to discuss the future of the forest – ParteciPrati – public walks, talks and seminars, flash-mobs and protests, as well as investigations on building rights of the area. The municipality almost did not consider these initiatives by maintaining its vision and leading to a socio-environmental conflict within the city.

Prati di Caprara forest after the 2 hectares deforestation in order to build a school. Source: Rigenerazione No Speculazione.

Later on, Rigenerazione No Speculazione was able, through an official petition, to get the support of other social and environmental organisations to request an official public discussion (istruttoria pubblica) with the government of the city. The unexpected and rather significant public participation and the powerful contributions of heterogeneous social actors led to an initial internal debate within the local government and a progressive rethinking of POC and of the economic relations with private partners.

Although two hectares of the forest were destroyed some months ago for the construction of a school, the rest of Prati di Caprara forest is still there. Recently, the local municipality argued for the importance of preserving trees, opened up a debate to discuss the POC and partly abandoned previous development plans. Indeed, the project of the shopping mall was declined, 30 ha of green area could be preserved, but at the same time the plan for a residential and a commercial area is still in place. In parallel, with regard to the reconsideration of the POC, Rigenerazione No Speculazione argued that it will continue with the organisation of events and demonstrations and fight to preserve the whole Prati di Caprara urban forest for a more sustainable, just and ecological future. 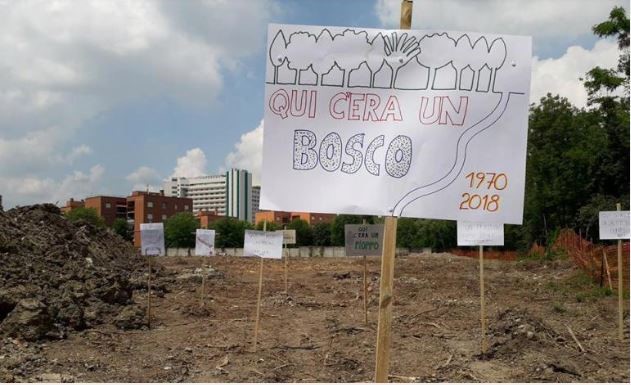 A sign to raise awareness on the Prati di Caprara forest. Source: Rigenerazione No Speculazione.

The evidence from Prati di Caprara shows how the maintenance, preservation and valorization of urban forest is strategic and related to conflicting socio-environmental visions in the context of contemporary neoliberal urban transformations. Indeed, it shows how the politics of public authorities and governments, despite their political discourse based on sustainability, green growth, participation and inclusive governance, is deeply influenced, and guided, by the power of private investments and of capital accumulation through the dispossession of common resources.

In parallel, the action of Rigenerazione no Speculazione movement enables us to reflect on the relevance of socio-environmental movements to open new grassroots democratic political spaces oriented to question the depoliticization of urban policies and to highlight the key role of socio-natures within cities.

In conclusion, it emerges how urban political ecology is strategic and will provide a great contribution to other sciences and approaches in the framework of contemporary debates on the conflicting role of urban forests. Moreover, a deeper critical analysis of these socio-natural entities will be necessary for urban political ecologists to strengthen the branch of the political ecology of urban forests and to highlight the socio-political nature of forests and their key role in contemporary urban regeneration processes.