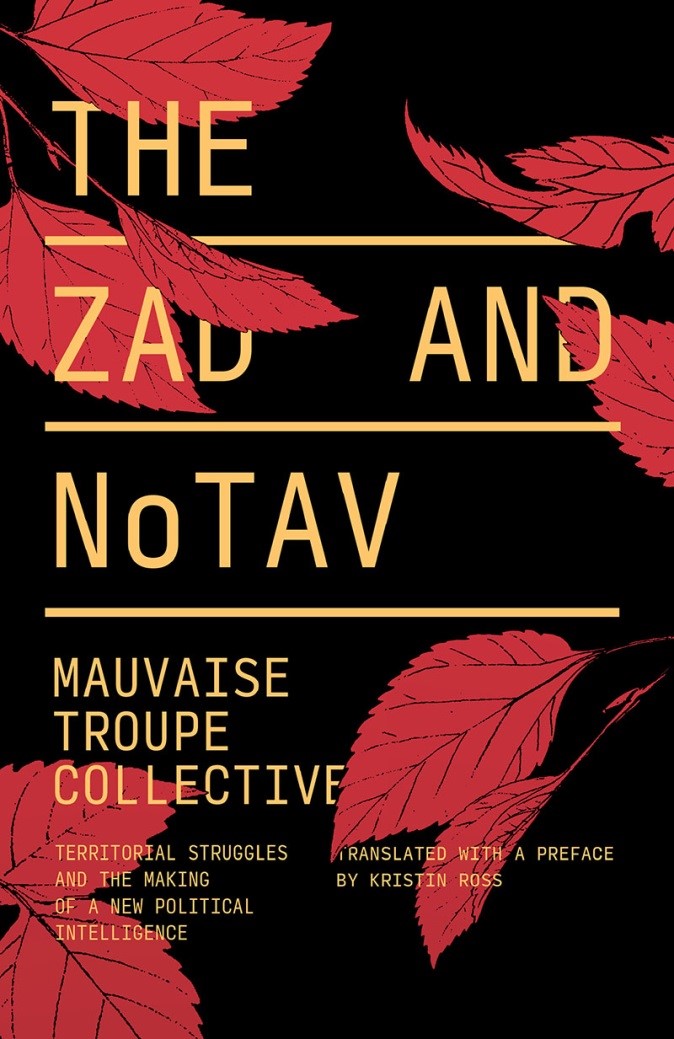 Alexander Dunlap* reviews the book The ZAD and NoTAV: Territorial Struggles and the Making of a New Political Intelligence, by the Mauvaise Troupe Collective.

If you read “the zad” or “NoTAV” and you do not know what that means, then that is reason enough to read this book. The ZAD and NoTAV: Territorial Struggles and the Making of a New Political Intelligence by the Mauvaise Troupe Collective (Verso, 2018) explores two notorious environmental conflicts in Europe: The zad in Notre-Dame-des-Landes (outside Nantes, France) and NoTAV in the Susa Valley (north of Turin, Italy).

The zad, originally standing for “deferred development zone” (zone d’aménagement différé), is a fight against a mega-airport that would expel residents and convert farmland into asphalt tarmac. This led to occupying the land and transforming the zad into “zone to defend” (zone à défendre) against airport construction and the authorities imposing this directive by force.

The NoTAV is the fight to stop the construction of a high-speed train (Treno Alta Velocità, TAV) corridor connecting Turin to Lyon through the villages of the Italian Alps. Both are decade-long struggles resisting police-military occupations, and serve as exemplars of environmental conflicts as well as experiments into creating alternatives to (capitalist) development and exploitation.

The ZAD and NoTAV was translated by the professor of comparative literature, Kristin Ross who briefly reflects in the preface on territorial struggles and the contextual politics, even ironies, of both struggles. The introduction seeks “to covey the trajectory and fate of these struggles” (p.2). This includes offering “lessons and ideas with the capacity to orient and guide future acts, and to make us collectively intelligent” to spread a political intelligence rooted in land (p.2).

Chapter 1 provides a comprehensive chronology of both the zad and NoTAV struggles, which are filled with astounding reflections and insights from various people within these movements. This includes lessons for movement organizing, navigating green washing, reacting to repression and government ‘dialogue’, as well as noting important fault lines within these movements.

Chapter 2 interrogates the terms “the people” and “popular” and how they relate to the zad and NoTAV movements. While the two struggles qualify as “popular,” the author(s) critiques the homogenizing and manipulative tendencies associated with (Left and Right) populism, then differentiating and elaborating through ethnographic detail how “inscription of revolt and openness is in [the] very roots” of these movements (p.86). Paradoxically, it “is thus the opposite of conforming to normality” that underlines the popularity of these movements—unlike traditional populism—and is “rather the aptitude to provoke unlinking, untimeliness” to form their own revolutionary socio-ecological experiments and cultures (p.78).

The social movements “composition” is discussed in chapter 3. The balance of “open confrontation with the enemy” and “the need to hold together [the movement’s] forces, impulses and disordered aspirations while at the same time not forcing them into alignment” is identified as the delicate, yet complementary social terrain to be traversed (88). Through a multiplicity of voices, the author(s) recount the conflictive, organizational and strategic approaches developed in both the zad and NoTAV movements. The reader is then led through a journey through Notre-Dame-des-Landes, discussing the formation of occupations, assemblies, and designating media spokespersons, as well as the overall composition of what could be called “leaderless resistance” in the two territorial struggles.

Chapter 4 magnifies its gaze, further revealing the dynamics and internal conflicts within NoTAV and the zad.  Discussing the issues of naming, shaping and inhabiting landscapes, the authors examine these concepts and others in relation to the two social movements. Noticeably spending more time on the zad, the internal dynamics and fault lines are explored at length, while also discussing the beauty of diversity and spontaneity, the reality of conflict over the “use of territory,”  “ethical conflicts over how to defend the zone,” “tactical conflicts” and “violence of human relations” regarding interactive sensibilities, agriculture, militant practices and controlling dialogue. The chapter ends with “the six points for the future of the zad.”

Reflection takes hold in chapter 5. From meditating on notions of “violence” to recognizing the continuity with the anti-globalization movement, the chapter reflects on how “the zad effect” went viral, suffered difficulties, successes and has been recuperated and branded by the media and state authorities. This includes discussing the Testet zad fighting a dam in Sivens, where Rémi Fraisse was murdered by police, and the future of linking up and spreading territorial struggles and the various sensitivities and calculation that this might entail.

NoTAV flags flutter in the wind in the Susa Valley. Source: Struggles in Italy, at https://strugglesinitaly.wordpress.com

The importance of this book cannot be overstated. Not only for reflecting and developing territorial struggles against industrial development, but also for allowing students and professors alike to look past the marketing and politics of mainstream environmental social movements that dominate academic perspective and literature.

Offering a gateway out of the environmental rhetoric—‘rise for climate’—and mass-demonstrations, The ZAD and NoTAV brings you back to the soil and the frontlines of two, and later in the book more, environmental struggles where people are refusing the destruction of their ecosystems and seeking to reconnect with the land and establish new “forms of life” to stop the industrial death machine. The firsthand accounts of these struggles, combined with the detailed discussions of anti-authoritarian organizing, political strategy and combative tactics earns this book a place on the reading list of everyone who is concerned with environmental politics and conflicts.

There is a reality, however, underemphasized in this book. While this is a reasonable underwriting of what is happening on the zad, the situation has become intolerable since the French president terminated the airport project on January 17th, 2018. What has transpired since seems to contradict much of the lessons discussed in this book. It appears this book neglects how traditional forms of organization—assemblies, committees and “parties”, no matter how nuanced, “the party of the no” or “imaginary”—can lead to power grabs and betray the latter part of the slogan: “Against the airport and its world.”

The book either underestimates (or embraces) these political forms, commonly the norm, which illuminates how the narrative of “composition” within this book turns to a pacifying political device of representation. Then again, maybe the dark side of attachment to place is also underestimated. Since the victory, the dominating factions within this composition have worked to make it politically feasible for clearing roads for authorities, meanwhile leaping into negotiating a normalization process with the government to legally secure their attachment to the land.

Transforming the zad into a singular political force has transformed its inhabitants into a negotiating device. Meanwhile, violence has taken strides to purge disruptive factions rejecting road clearance, negotiating with politicians, animal chipping and the overall normalization of the zad.

The victory has illuminated two ontological relationships to power bubbling beneath the surface and in conflict within this “composition:” one is about seizing power (the “knife” approach) and the other about spreading power (the “virus” approach, see p.3). The two can be complementary, but old political forms and attempts at control risk stifling life and, now as much as ever, people need to reflect on what they are creating—in or outside the zad—to prevent civilized and industrialized forms of life that foreground economic, social and climate crisis today.

*Alexander Dunlap is a post-doctoral researcher in the Department of Social and Cultural Anthropology at Vrije Universiteit Amsterdam, the Netherlands. His work has critically examined police-military transformations, market-based conservation, wind energy development and extractive projects more generally in both Latin America and Europe. He has published in Anarchist Studies, Journal of Peasant Studies, Political Geography, Journal of Political Ecology and NACLA: Report on the Americas