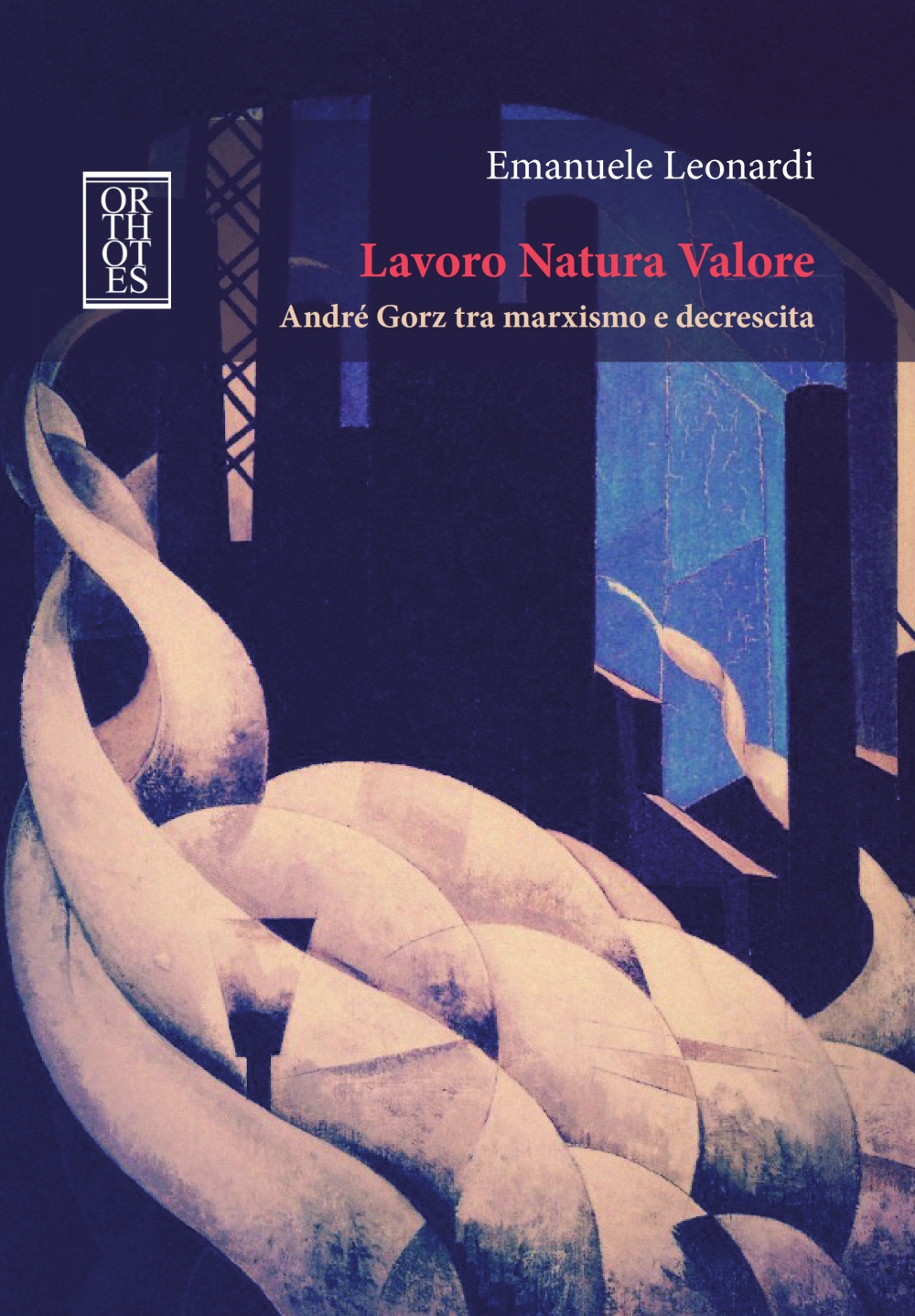 Emanuele Leonardi’s book is an analytically incisive and politically rich contribution towards a radical critique of capitalism.

In between a slow and tentative exit from the 2008 financial crisis and the increasingly manifest impacts of climate change, we might locate our present at the crossroad of a number of crises: economic, ecological and socio-political. These, given their recurrence and depth, increasingly prove to be systemic rather than contingent, integral part of an economy unable to solve them. In this context, a radical critique of capitalism appears both necessary and possible, and more effective if it relates these crises together.

Emanuele Leonardi’s Lavoro Natura Valore: André Gorz tra marxismo e decrescita [Labour Nature Value: André Gorz between Marxism and degrowth] (Orthotes 2018, pp. 216) is precisely a contribution in this direction, analytically incisive and politically rich. Positing André Gorz as an ideal ‘mentor’ of this project is not casual, for he was probably the first to make some of the contributions by the pioneers of degrowth (e.g. Ivan Illich) a consistent part of a Marxist agenda. The preconditions for such a dialogue exist in the similar critical posture towards capitalism. Yet, the two traditions have historically tended towards a “political division of labour” (p. 28) that calls for a novel articulation of both.

It is possible, in fact, that a degrowth ‘without Marxism’ remains ambiguous or at any rate not sufficiently poignant from an analytical perspective – so that its political contribution is diminished and the movement sometimes seems to unproblematically co-exist with the fiercest processes of neoliberal accumulation/appropriation. On its part, Marxism needs a deeper reflection regarding those reproductive and ecological issues, often overshadowed by a certain ‘productivist’ ideology, that degrowth has been tackling for decades.

The point is not simply to acknowledge reproduction, but to build it in the analysis of late capitalist societies, showing its (central) role and ecological potential. Leonardi pursues this ambitious task with clarity, intelligence but also irony and passion. The extensive references to Marxist texts (from Marx himself to Moore, through Gorz and Italian Autonomous Marxism –  operaismo or workerism) are rigorous in highlighting both their promises and pitfalls, but also constructive in producing a narrative for the present elaboration of political alternatives to capitalism.

André Gorz and his wife Dorine (Source: The Conversation)

Leonardi develops his diagnosis of capitalist economic-ecological crises by considering the labour-nature-value nexus. Up until the oil crisis of 1973, this nexus took a form that the author calls “classical”: labour appropriates and modifies nature to generate value. Of these production processes, nature is part as foundation but also as limit, remaining somehow external (value is produced by labour). Labour is submitted to the need of growth and accumulation via ever-increasing production of commodities and thus becomes an “entropic” activity. Nature (together with a number of social groups, most evidently women) gratuitously reproduces the conditions of production by regenerating ecologies, resources, absorbing waste. When labour stumbles upon nature’s reproductive limits, a conflict emerges between the spheres of valorisation and ecology.

The advent of neoliberalism marks the emergence of a new kind of labour-nature-value nexus that adds to – but does not substitute – the first. Especially since the 1990s rise of the “green economy”, capital realises that it is possible to generate profit directly from nature: nature no longer holds that ambiguous internal/external position but itself becomes a driver of value. Patents on GM seeds appropriate previously free natural elements that are then sold; carbon trading makes climate change a matter of market exchange through CO2 emissions quotas; etc.

In all these cases, cognitive labour (or, in Marx’s terms, the “general intellect”) is put to work in order to turn what was a “gift” (or limit) of nature into a commodity. Further, the deployment of cognitive labour is said to open the opportunity for a radical change in production systems, so that valorisation becomes compatible with environmental preservation: from entropic to negentropic, from unsustainable to sustainable (e.g. “smart energy provision”, efficiency, dematerialisation).

Yet, such a mixture of nature-cognition remains irreducible to capitalist valorisation. For it is first of all part of a reproductive sphere that does not respond to the logic of value in the first place. Reproduction, as opposed to production, is in fact concerned with meeting needs rather than exchanging commodities, with wealth rather than value. This tension is such that “the clash between environmental preservation (i.e. a form of wealth) and profit (the essence of valorisation) emerges” and dooms green economy to failure (p. 126): the capitalisation of nature does not remedy (and indeed worsens) the ecologic crisis.

Cognitive labour escapes traditional capitalist categories of production in other two senses. First, in its being property of a collective network rather than of individuals who receive a wage. Secondly, in having a certain negentropic potential: it pursues a logic of wealth while simultaneously showing that great part of entropic labour under capital is both anti-ecological and largely unnecessary. We therefore recognise that it would be possible to free our societies from (alienated) capitalist labour while also meeting sustainability needs. Such an “ecological transition” is desirable even before being necessary or just; not a matter of self-denial but an occasion of realisation and prosperity for both human beings and the rest of nature (as suggested by Gorz, Guattari, ecofeminists like Salleh, but we might also mention the Frankfurt School).

However, a radical change will unlikely happen in an automatic way: it is a possibility that needs politicisation. Hence, if we are to identify a revolutionary class we also need to find out the dynamics of its becoming-subject. A convergence between Marxism and degrowth might be precious in this sense. The first spells out the socio-economic processes causing current crises (of nature, of work) and shows that technological advancements (automation, digitalisation) allow a liberation of/from work – at the condition that capital accumulation is suspended. The second helps us to “identify the subjects” of critique and gives important conceptual instruments to rethink production within the frame of a logic of wealth, care and respect for ecologies.

We still need to investigate a potentially rich field: how, in practice, to make this class and appeal not only to the economically precarious life conditions in neoliberal times, but also to the symptoms of distress that emerge with them. Further, if contemporary difficult conditions generate “lines of flight” (to borrow Deleuze and Guattari’s term) that deterritorialise assemblages of human-natural exploitation – how to reterritorialise them in productive ways?

We are given some interesting hints throughout the last chapter of the book. Leonardi talks about a “process of intertwining between the existential sphere and working practices” and the “radical rethinking of property structures – towards collective uses” where the “general intellect” is democratically put at the service of improved livelihood for all. No longer experiencing the split between productive and reproductive activities, social time would be liberated; eco-socialist collectives would be able to access common means of production to meet local needs, yet they would be helped in doing so by the global and free availability of digital technologies and software to assist production and reduce labour/work time.

According to the author, only in this digital techno-economic paradigm “it is possible to politicise sustainability in such a way as to put a non-commodified social knowledge to the service of environmental protection” (p. 29). But this view, although fascinating, also poses a few questions. First, as Leonardi himself recognises, it is not completely clear nor given how digital technology and sustainability can be reconciled. Further, if the desirability of this paradigm is probably recognised by many social groups, this might not be the case universally.

In this sense, we should bear in mind Illich’s contribution. Irrespective of whether we agree with his view of technology as almost inherently enslaving, we are compelled to recognise that it is never neutral. In the first place, technological devices bring with them political implications that, even if not immediately evident, might have practical repercussions – e.g. dangers of centralisation of power and expertise. Secondly, technologies are ways of building certain relationalities with the world, and as such they have very specific affective-experiential effects.

A collective might well decide to defer (part) of its productive processes to machines and digital software. Yet, in other cases, a need/desire for a fleshy and lively, even effortful, reconnection with matter could lead a group to drastically reduce technological import in (re)production. In the light of these reflections, would it not be preferable to leave evaluations on the role and degree of technological involvement to the local level?

I am, of course, simplifying the argument and stretching those points that might become problematic and therefore need careful reflection. At any rate, Leonardi’s book remains very much valuable both analytically and politically in the effort to rethink an ecology of the commons starting from lived life and wounded ecologies. And this, thanks to a concrete and simultaneously utopian-revolutionary tension that – maybe – is just what we need in order to stir up an emancipatory ecological politics.

Alice Dal Gobbo is a PhD researcher at Cardiff University School of Social Sciences. Her main research interests are sustainability transitions in both political-institutional and everyday life contexts; as well as the development of innovative empirical research methodologies. Her work is inspired by Marxism, political ecology and ecofeminism, psychoanalysis, post-constructionist approaches.