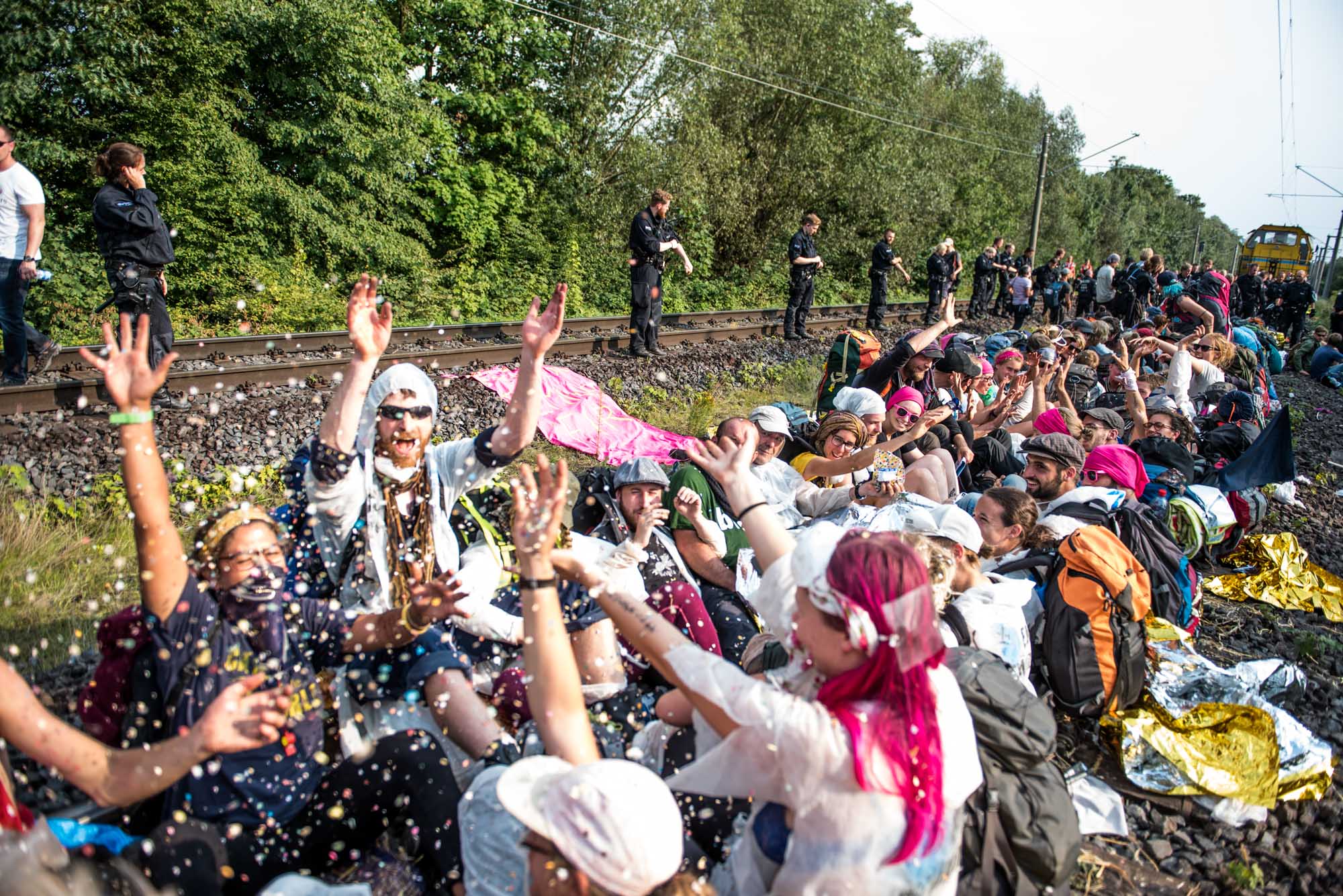 The climate justice platform Ende Gelände is at the forefront of European civil disobedience against widespread inaction in addressing climate change: it exposes political hypocrisy while forming a new generation of activists

Civil disobedience, in this case blocking a railway to stop the flow of coal to a power plant, can involve a lot od ‘down time’. Coming prepared helps use the time well. Photo credit: Jens Volle

During the last days of August, we took part in some of the action days of Ende Gelände to disrupt lignite (brown coal) extraction and burning in Western Germany. Around 6,000 activists had assembled to demonstrate that the use of fossil fuel is no longer socially acceptable.

Over the past three years, Ende Gelände has developed into an inclusive platform for groups and individuals who seek climate justice. It enables thousands of activists to come together to disrupt coal production in different parts of Germany, thereby producing important images and narratives for the change that our societies desperately need. It also presents a space for people from across Europe and around the world to build knowledge and solidarity and to practice acts of civil disobedience. These images, narratives, and spaces, we argue, are sorely needed. Western European democracies are indeed succeeding in keeping up the appearance of dealing with the threat of climate change while in reality upholding policies that take us on a path towards catastrophic global temperature increases. Germany epitomizes the success of post-political managerialism that characterizes these democracies, which advances economic growth at the expense of present and future generations. While renowned for its Energiewende (energy transition), Germany remains the world’s largest producer of lignite – ahead of China and Russia – relying on it for around one quarter of its electricity production. CO2 emissions aside, the air pollution caused by coal burning is estimated to cause over 20.000 premature deaths in Europe, as well as billions of euro in treatment and lost working days every year.

View of the Garzweiler lignite mine which covers app. 50 km2 and is expected to grow to more than 80 km2 over the coming decades. Photo credit: Adam Ronan

It is in this contradictory context that the Ende Gelände activists in Germany have played the part of the little boy in H.C. Andersen’s fairy tale, pointing out to the masses, that the Kaiser ‘hasn’t got anything on’! Unlike the story, however, it is doubtful if the hypocrisy so evident to the activists will reach beyond a small minority. The combination of capitalism and democracy has created the most perfect union in the history of government, a system of rule that is highly resilient to radical change from within. This is despite of, or perhaps partly thanks to, the fact that it allows the majority of its citizens to exercise constitutional rights to protest, freedom of speech and expression, and even civil disobedience without risking severe punishment.

There is today a broad consensus across western Europe, among citizens, politicians, and even the corporate establishment, that climate change is real, anthropogenic, and that we must act now if we are to avoid climatic changes of a magnitude that render swathes of the earth unlivable. Yet despite this public consensus, little meaningful action is taking place. Rather, European economies continue to operate under the logic of grow-or-die, while politicians, corporate leaders, and many scientists strive to convince concerned publics (and themselves) that a technological fix is possible. Thus, eco-modernist narratives of the promises of green growth, carbon-trading, and offsetting continue to thrive, carefully maintained by political and economic elites and parts of academia. They thrive in spite of the fact that global CO2 emissions from energy production are at the highest level ever, that there is no evidence whatsoever that we can decouple global economic growth from climate change impacts, and in spite of recurrent economic busts and the onslaught of disasters that have been induced or worsened by climate change. While these comforting eco-modernist narratives remain largely unchallenged by broad-based contestation, activism for climate justice that do challenge them is often framed as extremism and even terrorism. This is the paradoxical situation of our time and the one that Ende Gelände attempts a response to.

Knowing that we are literally running out of time to avert disaster, platforms such as Ende Gelände glean lessons from past social movements and organize towards progressive social change. Here, people and groups can assemble in creative actions directed at western publics, signaling that we must radically change the way we live, produce, and consume, if we want to arrest climate change.

The climate camp situated in the midst of the coal-based energy infrastructure. This was the epicenter of educating, sharing, cooking, cleaning, strategizing and caring. Photo credit: Adam Ronan

As we joined the more than one thousand protesters to block the railway from the Garzweiler mine to Neurath power plant, we succeeded in halting coal transport, if only for a few hours. And then, we were removed. Throughout the action, we were surrounded and surveilled by a massive police force that vividly illustrated the potency of the German State. Unsurprisingly, none of the many actions had a significant immediate impact on coal and coal-based power production. But this was not the point. Rather, the real achievements of Ende Gelände lie elsewhere. First, in exposing the underbelly of the Energiewende – and the paradoxical response of European democracies to the threat of climate change more generally. Second, in practicing alternative ways of living together through a dedicated ethics of care and a commitment to direct democracy. Third, in providing a platform for nurturing the international climate justice movement where people of different backgrounds and with different levels of experience with activism come together to practice and learn civil disobedience as a form of contestation of climate injustices. Ende Gelände thus serves as a hatching ground for European civil disobedience against climate inaction and injustices. These, to us, are the promises of Ende Gelände.

The next Ende Gelände actions take place during the COP23, November 3-5, 2017 outside of Bonn. We hope to see you there.

*  Jens Friis Lund is a professor of political ecology at the University of Copenhagen, Denmark. His research examines political economies of resources extraction, environmental management and conservation, and their associated knowledge politics.

Rebecca Rutt is a research associate at the University of East Anglia, UK. Her research and teaching interests engage with issues of concern to political ecology, environmental justice, and feminist inquiry.

Adam Ronan is a photographer and MSc student in global development at the University of Copenhagen, currently studying political ecology, and the dynamics of revolution, democratisation, and peacebuilding.