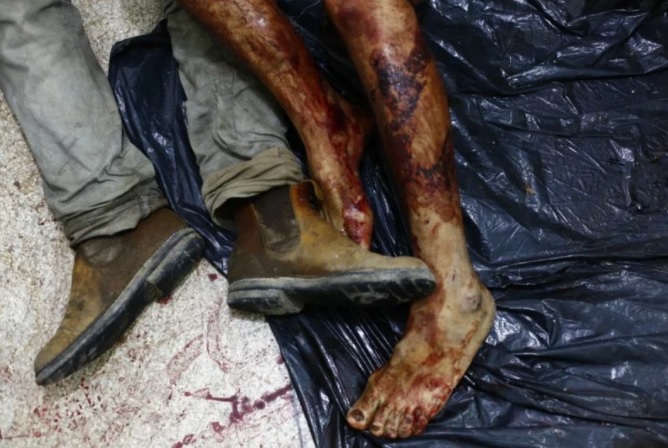 Even when the police doesn’t kill in Pará, Brazil, it still lets others do the killing.

The coup and the political power of the rural sector in Brasília have provided Amazonian gunmen with a carte blanche. We are living in times of death. The massacre of nine men and one woman in Pau D’Arco, on the Santa Lucia ranch in southern Pará, on Wednesday 24 May, brings back the memory of terrible times and the return of terror. The massacres of the past are being repeated in Pará.

These collective deaths are perpetrated by groups of gunmen at the orders of ranchers. Death jobs that are executed like horror movies with torture, multiple shots and cruelty, and which are followed by parties celebrating the victory of the big ranchers and the destruction of the poor. Adventures that are told with a hunter’s pride.
Last April 20th, in Colniza (in the state of Mato Grosso) there was another slaughter of nine workers on the Gleba Taquaruçu do Norte. Ten years ago another scene of violence happened in the same place, as I describe in RollingStone magazine (here the link in Portuguese), “Black Bird” was killed by gunmen on 28 August, 2006. “Black Bird”, José Roberto Sabino, was captive when he was murdered. After the crime, the gunmen (locally called guachebas), among whom was one named “Polaquinho Matador” (Little Polish the Killer), went out to drink beer, eat steak and brag about the inhumane cruelty they had just committed.

In the case of Colniza, the greed that justified the deaths was linked to the sale of illegal timber. The reason behind the recent murders in Pará was landgrabbing. Capital goes hand in hand with a moralism of violence: the ethic of economic success is coupled with the deaths of the poor that made the money, all with arrogance and psychopathic pride. On the Santa Lúcia farm, there is strong evidence that the massacre is linked to “revenge” associated with the defense of the grabbed land. When there is a fear of losing land, the rancher does not want to lose his honor, so he orders murders.

In the first five months of 2017, there have been at least 36 deaths of land defenders in Brazil: two massacres, one in Colniza (Mato Grosso) and one in Pau D’Arco (Pará), and seven other killings in Pará. This year will be remembered forever, and will always be associated to the righ wing conservative govenrment of the governor of state of Pará, Simão Jatene, and the presidency of Michel Temer.

In Pará, there is a historical context that contributes to turning on the killing machine. This occurs when a moment of State of Exception arises, such as what we are living now in Brazil with the paralysis of democracy and of the institutions of the Rule of Law). A carte blanche from Brasília, with the Ministry of (In)Justice being headed by a rancher, the political power in congress and the ability to annul the work of institutions of control, is enough to start the blood bath.

Social movements have known long before the coup that the cloud of death was approaching. It was on the fateful day of 17 April 2016 -20 years after the massacre of Eldorado– that the parliamentary coup took place in the House of Representatives. One year later, things got worse. During the celebrations that marked the memory of the Massacre this year, the atmosphere was tense at the Youth Camp of the Landless, which is organized by the MST at the “Curva do S” (aka the exact place where the massacre took place). Shots were being fired from cars towards the camp all night long. On the day of the ceremony, which always takes place in the morning, militants noticed the presence of at least eight gunmen trying to disguise themselves among the peasants. There were also some Pará and Federal secret police agents, militants said, attempting to disguise themselves as peasants.

Ranchers are circulating new death lists, with names taken from the meetings of rural unions. These circulate especially through the hands of violent ranchers who live and grab land between Parauapebas, Curionópolis, Xinguara, São Felix do Xingu, Redenção, Tucumã and Canaã dos Carajás. The market for gunmen has warmed up again and nicknames of new killers go around, always accompanied by myths of fearless professionals and cold executors.

Pará is the stage for the “Theater of Cruelty”, as the french dramatist Antonin Artaud wrote, with a script that goes through Brasília and Belém. The space of death in southern Pará is a mythical place of violence, from the brutal execution/elimination of the Araguaia Guerrilla, to the war that followed against peasant settlers in the 1970s and 1980s, and the terrifying massacres of 1985 and 1986 (Chacina da Ubá, Chacina da Princeza, among others). In the mid-1980s, Pará was a bloodbath promoted by figures such as the mythical Sebastião da Teresona, a notorious gunman of the Mutran family, who were like feudal lords of the Pará nut and who formed large estates of grabbed lands in which forest was turned to pasture. With the modern mediatic-parliamentary coup, Pará is bathed in blood again, with at least 17 deaths this year.

In the film ‘The Church of the Oppressed’ (1986), director Jorge Bodanzky interviewed Sebastião da Teresona in the living room of his house in Marabá. Relaxed on his sofa he dodged the accusations of his crimes with expressions of false naivety. He called himself a “Pará nut extractor” and a “contractor”:

“There’s a guy who got up on a stage and said that I run a gunmen office in town. But I’m not like that. There is no witness, no evidence. And I have ordered to look for evidence anywhere. Have them check to see if there is a complaint against me at the police. There isn’t. You can go to the judge, you can go to the regional police head. There are no complaints.”

In 1986, a great war between settlers and gunmen was filmed on a farm located in Pau D’Arco, the site of last week’s slaughter. Directors Adrian Cowell and Vicente Rios, in the movie ‘Killing For Land’, recorded police involvement in the deaths of settlers. The police were looking after a ranch of a businessman who lived far away in Sao Paulo. From there, he financed the killings to secure tax incentives. Like today, impunity is a guarantee of freedom for the police to be hired as freelance gunmen. Like today, police officers do not allow family members to access the dead bodies of their loved ones, only allowed to retrieve the remains when already in a stage of putrefaction.

Cowell and Rios also tried to present in the film the work of the police, as the other side of the conflict. Even when the police in Pará don’t kill, they still let others do the killing. In Jacundá, in 1986, the gunmen killed the rural leader Sebastião Pereira and his young son, the three year old Clésio. Everyone knew who the gunmen were and who was the rancher that paid for the crimes: Joaquim Branco. In one scene, when picking up the body of dead settler, the police car of officer Mascarenhas makes an absurd deviation: instead of knocking on the door of the ranch, it turns around. Like today, the police in Pará does not investigate the killings.

However, even worse than the attitude of officer Mascarenhas of the old Jacundá of the 1980s, today we know from the report by Lilian Campelo in Brasil de Fato, that witnesses heard the voice of the head of police Antônio Gomes Miranda Neto among the policemen who massacred the peasants last week in Pará. In this case, the local head of police himself may be involved in the killings. In ReporterBrasil, the reporter Ana Aranha, wrote that she heard from survivors of the Pau D’Arco massacre stories of torture by police officers, before the deaths.

These two films were screened at the the CINEFRONT festival in Southern Pará, organized by the Federal University of Southern and Southeastern Pará. The intention was to provide the peasant youth with audiovisual information of the violent past that they know from stories and first-person memories.

There is no doubt that the peasant youth in Pará know all too well about the violence that their parents suffered and that they struggle to stop it from happening again. It is the rest of Brazil that needs to wake up and revolt against this barbarism that only happens because there is a carte blanche from Brasília.