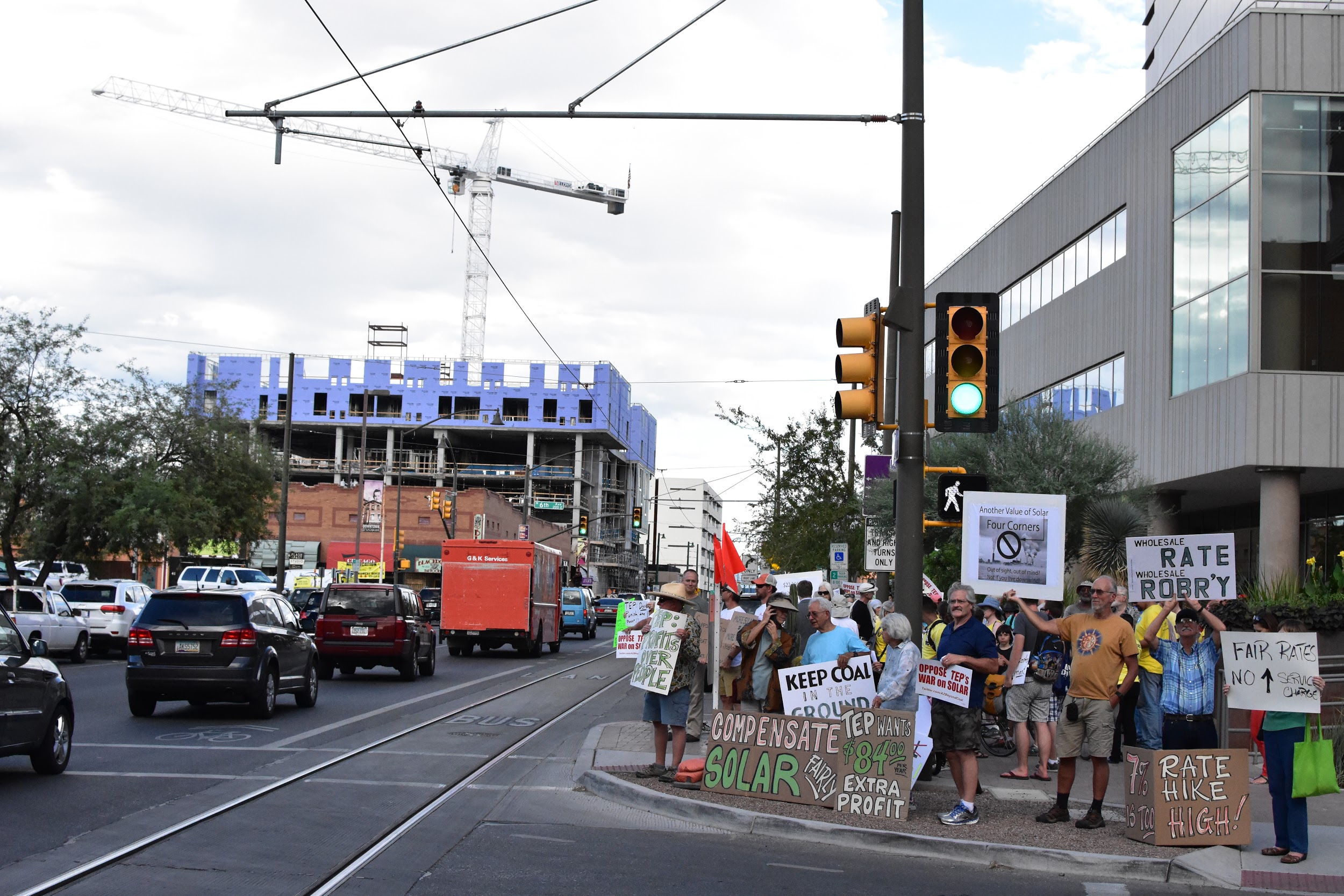 Tucson residents gather at a rally outside the utility’s headquarters, calling for fair rates that incentivize solar. Author: Remy Franklin.

How can we make our research relevant while navigating the politics of scientific neutrality? Reflections on the ethical and methodological messiness of practicing engaged geography. 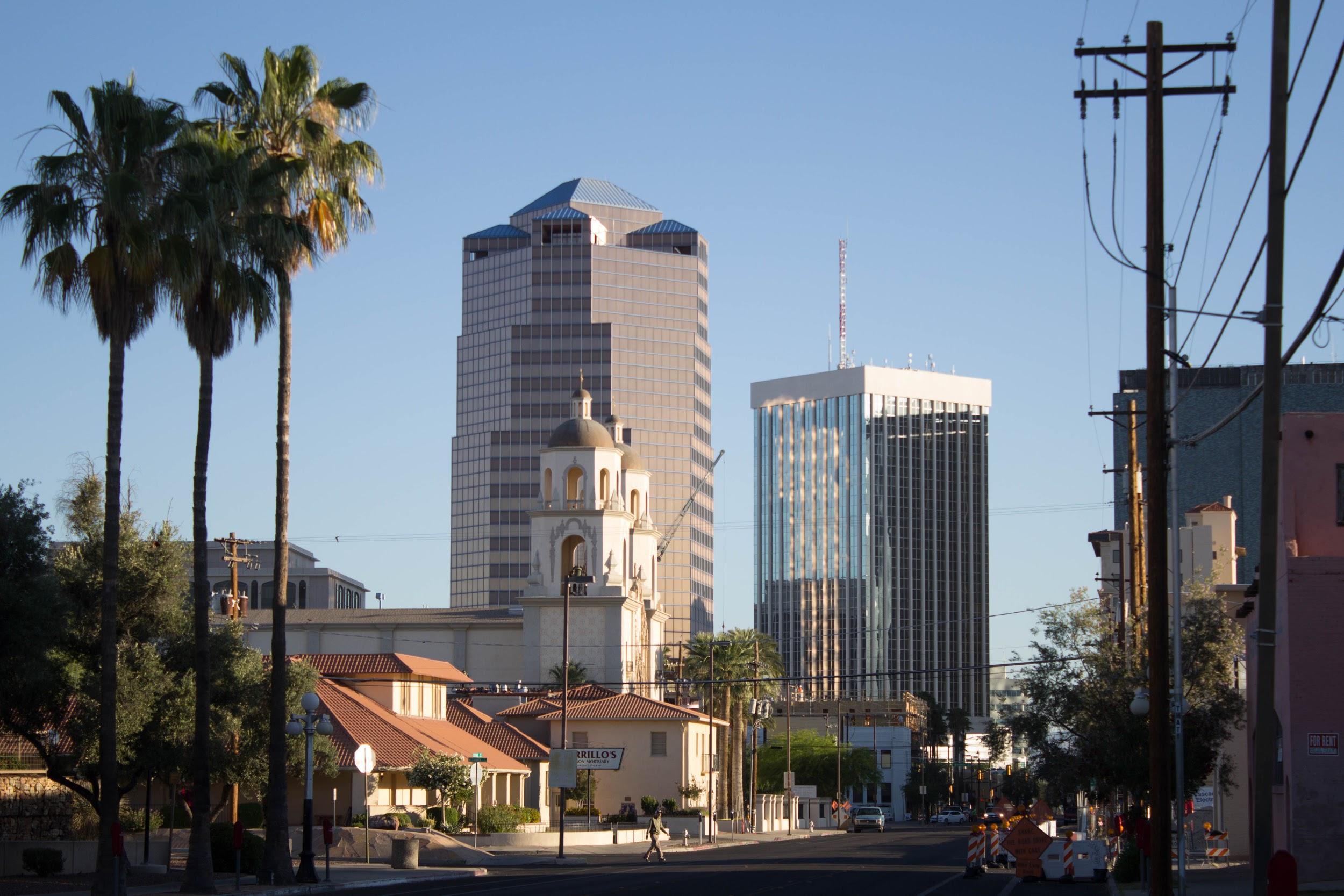 It was a morning in early May when I opened my computer to find an email back from the Institutional Review Board providing comments on my application for human research. Unlike most recipients of emails from University IRBs, I was excited – this put me one step closer to beginning summer field work for my master’s thesis.

In the IRB application – as in my MA thesis proposal – I presented a research design aimed at practicing engaged geography. I would study the politics of an ongoing electric utility rate case that has important implications for rooftop solar in Tucson, Arizona. I proposed ongoing dissemination activities through a public research blog and the production of a short documentary film about the rate case. On the blog I would share news and resources about the rate case and solar, along with my evolving thoughts, in an effort to engage with and amplify an ongoing public conversation about the future of electricity in Tucson.

This seemed relatively simple upon conception, but I have since run up against some challenges associated with doing engaged research. Looking back from four weeks into the process, it all started with the IRB email.

Should we influence the world through our research?

Most of the IRB reviewer’s comments were straightforward and helpful, but there was one that had me floored. Attached to the heading, “Provisions to the privacy of subjects and the confidentiality of data” the reviewer had inserted a comment:

“If this case is still ongoing, how can you ensure that the data you collect won’t affect any sides of the case?”

My immediate thought was something like: “well, isn’t that the point?”

I called the IRB reviewer to discuss, explaining that political ecologists often take a normative stance and attempt to change the issue they are studying. The reviewer was incredibly reasonable and acknowledged that this was acceptable. But, they argued, I should make my intentions more explicit in the research material. Per their suggestion, I included a statement that my research could impact the outcome of the rate case, and I decided to have all interviewees sign a consent form.

Three weeks later, I found myself wondering if this was the right choice. I had followed up on an interview request with the utility’s Director of Corporate Communications and Community Relations, sharing a flyer and the consent form I would ask him to sign. We had met in person at an event earlier that month, when he had agreed to an interview and given me his card. This time the response was different. The email was thoughtfully composed:

“I’m sorry, but we cannot cooperate. Due to the extended timeline of your project, any comments we make now would necessarily be presented out of context at a time when the case has evolved to address witness testimony, alternative proposals from intervening parties and other factors that cannot be anticipated. That, combined with your acknowledgement that you seek to influence the outcome of our case, compels us to decline.”

At least he read my consent form, right?

A rejection letter from the director of community relations at the institution you are studying for your master’s thesis is quite a blow, but it also raises some interesting questions. Should we seek to influence the world through our research? What ethical responsibilities do we have to disclose our intentions? Should academics strive to be neutral and is that even possible? What is engaged scholarship, and how do we practice it in a way that is ethical, transparent and self-reflective?

Tucson residents gather at a rally outside the utility’s headquarters, calling for fair rates that incentivize solar. Source: Remy Franklin.

Disclosure: I have normative commitments

I am studying political ecology because I am committed to social and environmental justice. I aim to develop a critical understanding of important things in the world and my relationship to them – climate change, capitalism, ideology, growth, electricity regulation, the solar industry.

I am open to changing my opinions and I am frequently wrong, but I still have normative commitments to work for certain goals and values. I believe in democracy and in narrowing the income inequality gap. I believe that corporate interests shouldn’t govern politics. I believe that as a nation and planet we need to quickly transition to 100% renewable energy.

As a new geography student I have been inspired by a Marxist theoretical approach to the role of academics, which is succinctly captured by David Harvey (1984) in an Historical Materialist Manifesto (105):

“Accept a dual methodological commitment to scientific integrity and non-neutrality.” 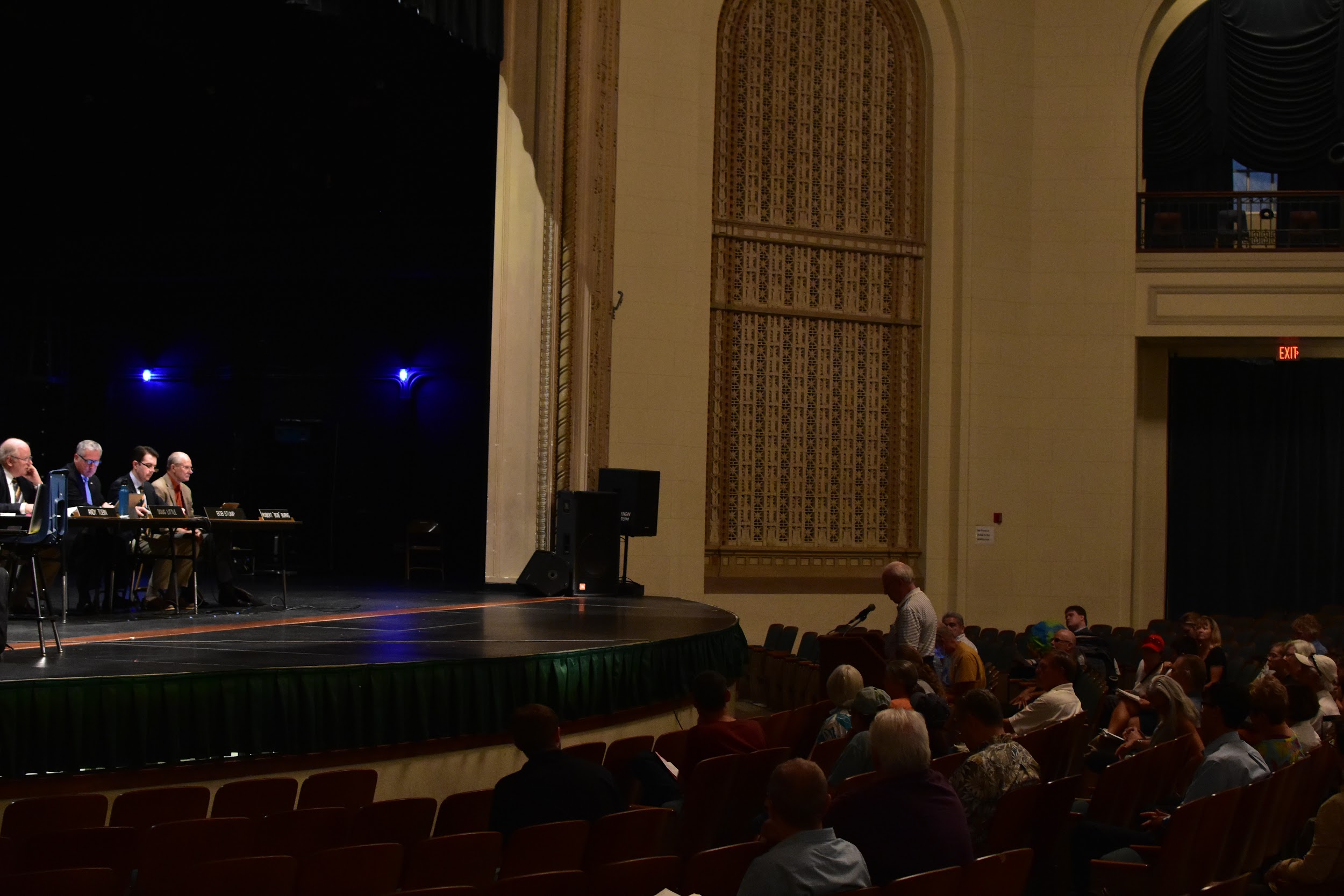 Regulators from the Arizona Corporation Commission hear public comment about the rate case at an August hearing in Tucson. Source: Remy Franklin.

The guise of neutrality

In his rejection email, the utility representative gave me some advice:

“I hope you seek participation from informed observers who do not have a personal or professional stake in the rooftop solar industry.”

Wait, don’t we all have at least a personal stake in the rooftop solar industry?

In 2015, solar energy – led by demand for rooftop photovoltaic systems – accounted for nearly 30 percent of new additions to U.S. electric generating capacity, surpassing natural gas as the largest addition to national energy supply. Rooftop solar is a critical driver of the transition to renewable energy in the United States, which is necessary in light of global climate change. Don’t we all have a stake?

Still, I shouldn’t be surprised by this comment. The idea that scientists and researchers should be neutral is pretty pervasive, even in the social sciences. But in reality, we all have values, goals and reasons that we do the work we do, and these are inherently political. Richard Peet (1977, 6) put it nicely:

“There is no such thing as objective, value free and politically neutral science, indeed all science, and especially social science, serves some political purpose; second, that it is the function of conventional, established science to serve the established, conventional social system and, in fact, to enable it to survive.”

Should I pretend to be a neutral observer to convince a savvy corporate communications director to talk to me? The utility’s rationale for declining my interview request was entirely justified, but just like my request, their decision served a political purpose. As long as there is a guise of neutrality, it seems difficult to reconcile the ethics of disclosure with the politics of engaged research.

What is engaged research?

It is easy to conflate “engaged” with “applied” or “public” scholarship, but I am finding important differences between them. Many scholar and disciplines do applied research routinely, whether that means working directly for industry R&D or engaging stakeholders in a needs assessment. Applied research has an application; it aims to solve a problem or address a need in the world.

I understand engaged research differently. It implies a more iterative process, in my case sharing the results of my research in an ongoing manner. I started a research blog not just to share my findings, but to get feedback. To accept comments and respond, to start new conversations that in turn influence the questions I ask. I want this process to be as public or transparent as possible – available to anyone who cares to engage. I aim to make my research a democratizing process.

What links engaged, applied and public research is an attempt to be relevant beyond the academy. But as Lynn Staeheli and Don Mitchell (2005, 357) remind us,“research is not born relevant; it is made relevant in practice and for particular ends.” As researchers we seek to make our research relevant through various activities, so “relevance becomes a function of direct political intervention” (370).

As a scholar, I can leverage my position to create relevance around an issue that might not have been considered relevant by preexisting agendas. Ironically, the guise of neutrality is partially what lends us as researchers the privilege of legitimacy. Should I use this legitimacy to promote my values and politics, or is my goal to disrupt the guise of neutrality itself?

I am finding that engaged research is a messy endeavor, full of tradeoffs, decisions about self-representation, and questions about when and how to share the results of my research. Pursuing Harvey’s dual methodological commitment to scientific integrity and non-neutrality will require constant reflection and the flexibility and humility to change my approach, and my research design.

Facing these challenges around doing engaged research, I find it useful to return to Laura Pulido’s discussion of being a scholar activist. Drawing on Gilmore’s idea of ‘organic praxis’, Pulido (2008, 342) describes a “talk-plus-walk… the organization and promotion of ideas and bargaining in the political arena.”

This seems to be the process – the political work that researchers do whether we like it or not. In the case of my fieldwork, I will continue to promote a more public conversation about an important rate case, even if the utility won’t participate. As public interest builds, perhaps they will choose to weigh in.

I hope the utility does weigh in, because I am committed to understanding all sides of the issue. This is one of my values. In the meantime I will seek participation from other informed observers, and like me I am sure that every one of them will have a stake in the rooftop solar industry. How could they not?

[Postscript: October 6, 2016 – An employee of the utility did eventually agree to meet me for an interview, which turned into an engaging three-hour conversation. He works on solar and, like me, is passionate about integrating more renewables into Tucson’s grid. We continue a dynamic, critical and friendly conversation about the opportunities and barriers to a socially just renewable energy transition.]

This post was originally published on the Public Political Ecology Lab (PPEL) blog in June, 2016.

* Remy Franklin is a graduate student and human geographer at the University of Arizona interested in the political ecology of climate justice. His Master’s thesis analyzes opportunities and barriers for a just transition to solar energy in Tucson, Arizona, based on the social and political dynamics of an ongoing electric utility rate case. Remy works with the Public Political Ecology Lab (PPEL), most recently developing the website home for a new initiative called the Climate Alliance Mapping Project (CAMP).