A political ecology of EU energy infrastructure: The Shannon LNG Terminal in Ireland

Proponents of degrowth and accelerationism will likely be found in the same room for decades to come. Despite their opposite ‘branding’, they should probably talk; they have a lot to learn from each other.

For the past little while I’ve been involved with a group in Barcelona, which studies and advocates ‘degrowth’: the idea that we must downscale production and consumption to have a more equitable society, and that we therefore must dismantle the ideology of ‘economic growth at all costs’. As you can imagine, they spend much of their time trying to clear up misconceptions: “No, we’re not against trees growing. Yes, we also would like children to grow. Yes, we also like nice things like healthcare.”

But this year I have been living in London. There, activist ideology seemed to be permeated by the ‘accelerationists’—who argue that capitalism and its technologies should be pushed beyond their own limits, to create a new post-capitalist future. Accelerationism is almost like, having tried hard to evade a black hole, a ship’s crew decides that the best course of action would be to turn around and let themselves be sucked in: “Hey, there could be something cool on the other side!”

After a year of experiences in some of London’s activist circles, I now understand better where this is coming from. Decades of government cutbacks, squashing of unions, total financialization of the city, and lack of access to resources for community organizing has meant that London activists are systematically in crisis mode—exhausted, isolated, and always on the defensive.

These worlds of thought are best encapsulated in two recent books. In Degrowth: A vocabulary for a new era, edited by Giacomo d’Alisa, Federico Demaria, and Giorgos Kallis, its authors explain concepts such as care, environmental justice, basic income, commons—all of which are seen as part of degrowth’s “interpretive frame”. For them, degrowth is an umbrella term that houses a variety of movements, ideologies, and ideas for a more sustainable, and less capitalist, world.

In Inventing the Future: Postcapitalism and a World Without Work—an extension of their viral #Accelerate Manifesto—authors Alex Williams and Nick Srnicek discuss the promise of basic income, increase in automation technologies and utopian thinking for creating a kind of “fully automated luxury communism”.

Surprisingly, both books have a lot in common. You have the utopian imaginaries, a renewed focus on alternative economics, the willingness to think beyond both neoliberalism and Keynesianism, and the ability to grapple with contemporary technology’s effects on society and the environment. 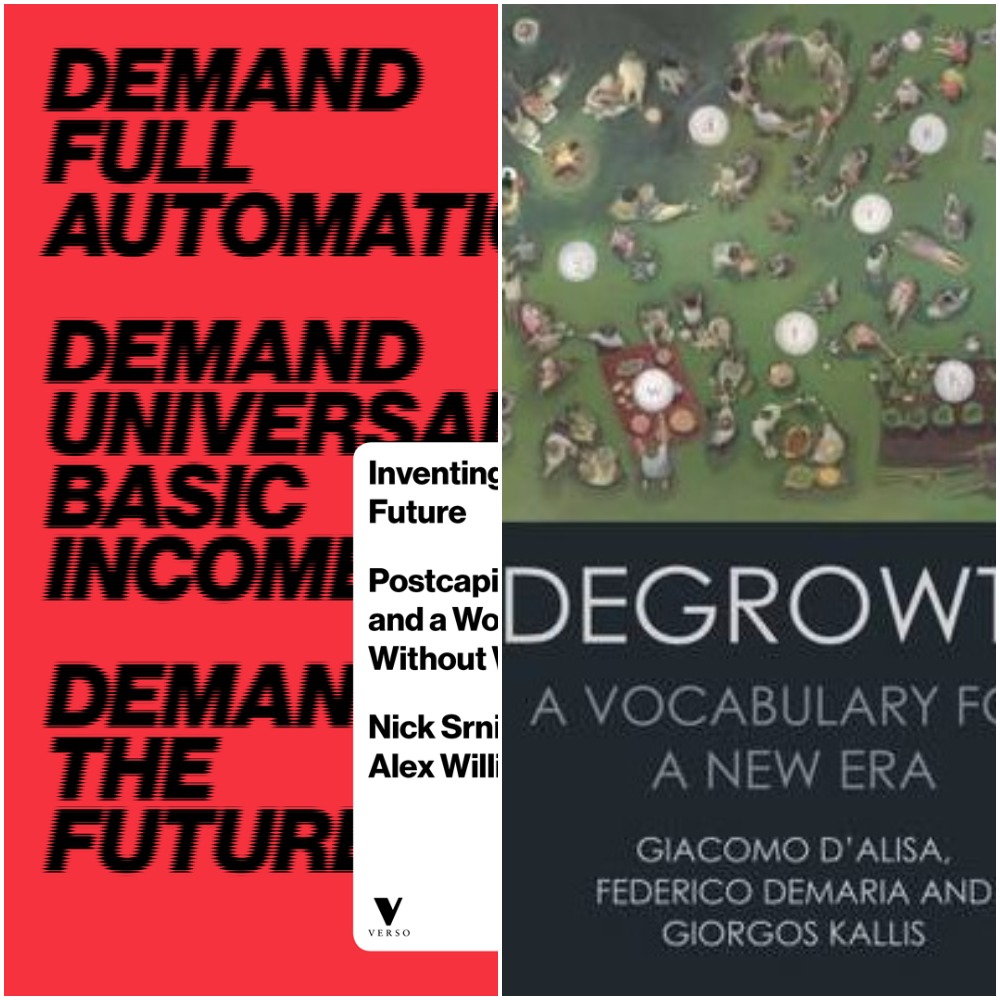 But they are also quite different. These differences were made real to me on a dreary Saturday afternoon last winter at an event in London called “Future Society Forum”. After a short introduction by Nick Snricek—a prominent accelerationist—activists from around London were invited to brainstorm what a leftist utopia could look like.

The room was divided into different ‘themes’: work, health, environment and resources, education, etc. We were first asked to place post-its with ideas for “futures” particular to each theme. (Comically, someone had put ‘basic income’ on every single theme before the event had even started—an attempt at subliminal messaging?) Then, we were asked to split into groups to discuss each theme.

Given my background, I decided I could contribute most to the ‘environment’ theme—though I was certainly interested in joining the others. After a 15-minute discussion, the time came for each group to feed back to the larger collective. Unsurprisingly, the environment group envisioned a decentralized society where resources were managed by bio-region—a participatory, low-tech, low-consumption economy, where everyone has to do some farming and some cleaning up, and where the city is perfectly integrated with the country. I’m pretty sure I heard sniggers as our utopia was read out loud.

The ‘work’ group, on the other hand, envisioned a future with machines that would do everything for us—requiring big factories, where all labor (if there was any) was rewarded equally, where no one had to do anything they didn’t like, in which high-tech computer systems controlled the economy. Basically the “fully-automated luxury communist” dream.

Of course such differences are not totally new on the left—similar opposing strands played their part in social movements of the past: should we smash the machines or take them into our own hands? Should we grab the reigns of the state or disown it outright? Friedrich Engels may have totally dismissed peasants as possible revolutionaries, but the Russian anarchist Mikhail Bakhunin insisted that peasants could, and would, be crucial in creating a world beyond capitalism—and that the left could learn from peasant communes for an idea of what another world would look like.

These same tensions are competing in the accelerationist and degrowth ideologies. Accelerationists like Srnicek and Williams emphasize automation, the role of unions, and reduction in the working week as the primary variables in shifting the gears beyond capitalism. Their focus is on the big stuff (labor, global trade) and they argue a focus on small interventions by the left is part of the problem, not a solution to it. Degrowth scholars look toward small “nowtopias” and make alliances with those struggling against extractivism—often peasants, forest-dwellers, and indigenous peoples.

And yet there is something rather new here as well: the introduction of the question of speed into leftist thought. They do this in very different ways.  For degrowth, ‘growth’ is the acceleration of the energetic and material flows of the economic system at exponential rates, as well as the ideology that justifies it. Let’s call this socio-metabolic speed. Their political project comes down to challenging that ideology head-on, as well as re-thinking economic theory to allow societies to ensure well-being but also transform how energy and material is used—necessary for a more just economic system.

Accelerationists, on the other hand, think of speed much more figuratively: they are referring to the Marxist concept of the material conditions of human relations. For them, acceleration means moving beyond the limits of capitalism, which requires a totally modern stance. This is socio-political speed: the shifting gears of social relations, as a result of changing technological systems.

Both, I think, have put their finger on a crucial question of our times, but from slightly different directions: can what gives us modernity—a colossal global infrastructural web of extraction, transportation, and fabrication—be democratized? For accelerationists, this would require making that web more efficient and modifying political systems to make it easier to live with—shifting the gears of social relations beyond capitalism. For degrowthers, it would require slowing that system down and developing alternative systems outside of it. I don’t think these two aims are mutually exclusive. But it would require going beyond simplistic formulas for system change on one side, and anti-modern stances on the other.

But it is also worth going one step further and asking whether that infrastructural system would really take kindly to these shifts in gears. Or will it simply buck the passenger?

To navigate this question, it is useful to briefly turn to the foremost “philosopher of speed”: Paul Virilio. In Speed and Politics, Virilio traces how changes in social relations were brought about through the increased velocity of people, machines, and weapons. Through Virilio’s eyes, the history of Europe’s long emergence out of feudalism into 20th century modernity was one of increasing metabolism of bodies and technologies. Each successive regime meant a recalibration of this speed, accelerating it, managing it. For Virilio, political systems—be they totalitarian, communist, capitalist, or republican—emerged both as a response to changes to this shift in speed and as a way to manage human-technologic co-existence.

What’s important for this discussion is that Virilio does not separate the two types of speed: changing social relations also meant changing metabolic rates—they are the same, and must be theorized simultaneously.

Doing so could be useful for both degrowth and accelerationism. While degrowth does not have a succinct position of how to respond to today’s shifting socio-technical regimes—accelerationism’s strong point—accelerationism under-theorizes the increased material and energetic flows resulting from this shifting of gears. Efficiency alone cannot limit the disastrous effects of this speeding up. As degrowth theorists have underlined, environmental limits must be politicized. Control over technology must therefore be democratized and metabolic rates decelerated if the Earth is to remain livable.

Because of this gap, accelerationism comes across as a metaphor stretched far too thin. A napkin sketch after an exciting dinner-party, the finer details colored in years afterwards—but the napkin feels a bit worn out. Big questions need to be asked, questions unanswered by the simplistic exhortation to “shift the gears of capitalism.”

When the gears are shifted, the problem of metabolic limits won’t be solved simply through “efficiency”. Increased efficiency and automation has, and likely would still, lead to increased extractivism and the ramping up of environmental injustices globally. Another question: what does accelerationism mean in the context of a war machine that has historically thrived on speed, logistics, and the conquest of distance? Is non-violent acceleration possible, and what would class struggle look like in that scenario?

To be fair, degrowth doesn’t answer all the big questions either. There has been little discussion on how mass deceleration would be possible when, as Virilio shows, mass change has historically occurred through acceleration. Can hegemony decelerate?

If degrowth lacks a robust theory of how to bring about regime shift, then Williams and Snricek’s brand of accelerationism doesn’t allow for a pluralist vocabulary that looks beyond its narrow idea of what constitutes system change. And yet, the proponents of each ideology will likely be found in the same room in the decades to come. Despite their opposite ‘branding’, they should probably talk. They have a lot to learn from each other. 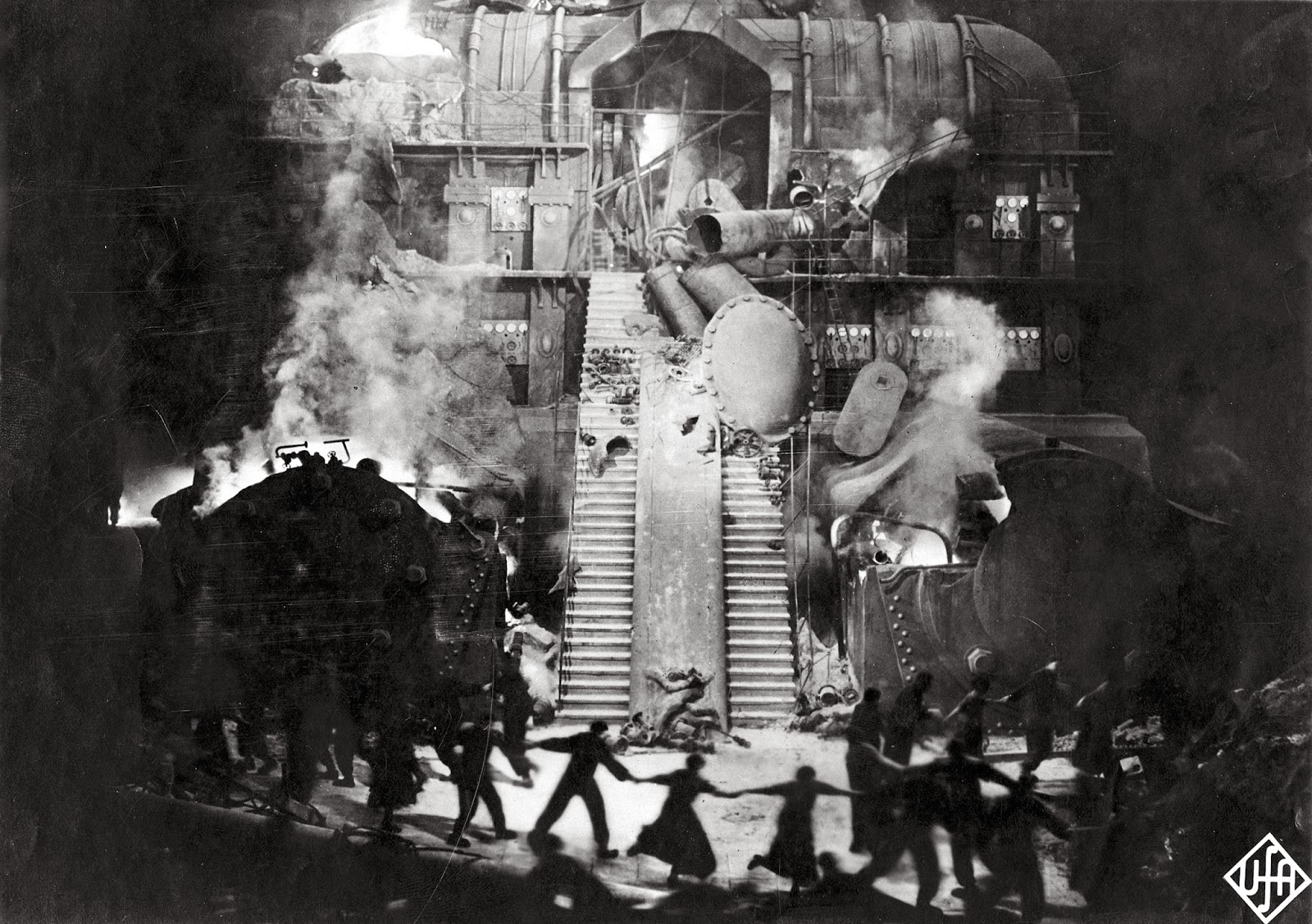 A longer version of this article originally appeared on the Institute for Social Ecology Blog.

*Aaron Vansintjan is currently completing a PhD on food politics and gentrification at Birkbeck, University of London. He is co-editor at Uneven Earth, a slow website politicizing environmental issues. His previous contributions to the ENTITLEblog include ‘Going beyond the “ecological turn” in the humanities’; ‘Decolonizing nature, the academy, and Europe: An interview with Zoe Todd’ and ‘The Anthropocene debate: Why is such a useful concept starting to fall apart?’