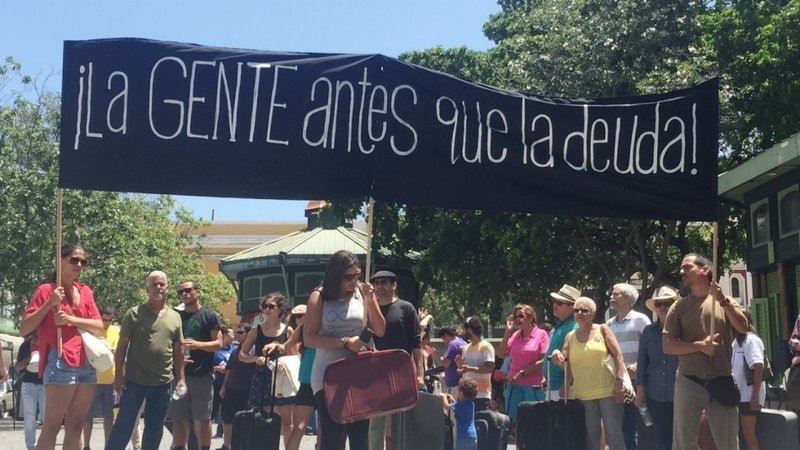 Puerto Rico, a colony of the United States since 1898, currently faces an economic-financial and socio-political crisis with an economy that has contracted for 10 years, record-level outmigration and unemployment, and a massive debt of more than $70 billion, representing almost 70% of the county’s gross domestic product (GDP). Some have called it the “Greece of the Caribbean” and others have spoken of a potential humanitarian crisis.

The crisis is in important ways self-inflicted, thanks to decades of ill-conceived economic policies, as well as high levels of corruption. Yet it is undeniable that the colonial situation –expressed in US policies such as the mandatory use of the US naval fleet (the most expensive in the world) for imports to Puerto Rico, costing hundreds of millions annually; the triple-exempt tax status of Puerto Rico government bonds; the prohibition of any type of protection of local small businesses against large US corporations; and the inability to design foreign policies (including trade policy)– has also played an important role. The same can be said of the parasitic behaviour of the corporate financial sector which benefited from these policies. Any solution that does not address these issues, is therefore bound to fail.

In addition, there are strong arguments for not paying this debt in full. First and foremost, we need to recognize the social and ecological debt the United States has with Puerto Rico: from the US military bases that stole Puerto Rican land and water and, in cases like Vieques, created huge socio-economic and ecological devastation, to the economic returns and ecological damages generated by US corporations which have historically exploited Puerto Rican workers and land. Indeed, for decades, US corporations have operated from Puerto Rico without paying any taxes, repatriating more than $30 US billion annually.

Moreover, if, as the US Supreme Court recently confirmed, Puerto Rico’s legislative powers  emanate from the authority of the US Congress, then, the logical conclusion is that the debt incurred by the Puerto Rican government is actually owed by the US government which is the true authority. Another argument is that the vulture funds which have capitalised on the debt, bought it for a fraction of the amount they now seek to reap, with full knowledge of the dire economic situation and the risks faced in these investments. Finally, nearly half of the debt could be illegal, strengthening long-standing calls for a full audit of the debt before continued payment.

As a supposed ‘solution’ to this debt crisis, the US House of Representatives has passed a proposed law, cynically called PROMESA (promise, in spanish), designed by the Wall Street vultures precisely to guarantee that Puerto Rico pay this debt. The bill, which is supported by President Obama and by Hillary Clinton and is expected to be approved in the Senate, would lower the minimum wage in Puerto Rico for workers under 25 years of age, and would create a seven-member unelected board (to be appointed by the US Congress and the President).

This board will have powers to make all decisions about the Puerto Rican budget, make changes to the Puerto Rican public retirement system, sell Puerto Rican public properties, and approve in fast-track processes -over existing laws and the Puerto Rico constitution- any projects they deem priority for generating revenue. Amongst the projects that could be approved in such a fashion are a waste incinerator plant, which has faced strong opposition from local communities and environmental organisations, and a ‘super tube’ to transport natural gas across the island. The proposal contains no guarantee for a debt restructuring or bankruptcy process.

Besides laying bare the colonial status of Puerto Rico, PROMESA is a clear attempt to intensify the processes of dispossession of Puerto Rico’s resources and turn the island into an exclusive paradise for the super-rich. It also represents an imminent threat to the well-being and the lives of all Puerto Ricans. Various civil society organisations have begun organizing to mobilise against this project, while at the same time denouncing this colonial condition and demanding an end to it.

One of these organisations, Junte contra la Junta has put out the following international call that seeks support in this struggle, which we reproduce below in English. The call is also available in Spanish,  Français,  Euskera,  Türkçe,  Português,  ქართული,  Кöрди.

International Call to Struggle and Solidarity against the Imposition of the Oversight Board (P.R.O.M.E.S.A) in Puerto Rico

We invite the international community and the Puerto Rican diaspora to join us in solidarity in our country’s present situation. Let’s remember that Puerto Rico has been a colony of the United States since 1898. Ever since the invasion up to our present time, the United States and the colonial government of Puerto Rico have imposed a series of laws for economic and political gain (Foraker Act in 1900, Jones Act in 1917, Gag Law in 1947, Puerto Rico Federal Relations Act in 1953, Public Law 7 in 2009) which have disrupted the social, economic, and political reality of the oldest colony in the American continent.

They have submerged us in a desperate economic crisis, with the intent of continuing to steal our resources while the living conditions of our people continue to rapidly deteriorate, thus exacerbating the precariousness of healthcare and education, rising costs of living, rampant unemployment, and rising criminality rates. A massive emigration has reached unimaginable levels, while there is no stopping the delivery of our country to big interests for their businesses and vacations. Currently, Puerto Rico has become the Greece of the Caribbean, with a debt higher than 73 billion dollars owed to Wall Street’s financial capital. The Oversight Board (P.R.O.M.E.S.A), born out of H.R. 5278, pretends to bleed out the country for the benefit of the creditors (vultures). With the imposition of said board, true to the style of soft coups perpetrated by U.S. imperialism, the following would be established.

We call on the Puerto Rican diaspora in every corner of the world, social movements, and internationalist political organizations to show solidarity and organize against the Oversight Board. How? Visit https://juntecontralajunta.wordpress.com and stay up to date. Find information and agitation tools. Organize your neighborhood and your community, doing teach-ins and information sessions, distributing newsletters, protesting and marching against the Oversight Board. ¡Let’s build a Resistance!

No to the Oversight Board! No to colonialism! No to imperialism!