War and cover up in the Amazon

The Damage Done and the Dams to Come 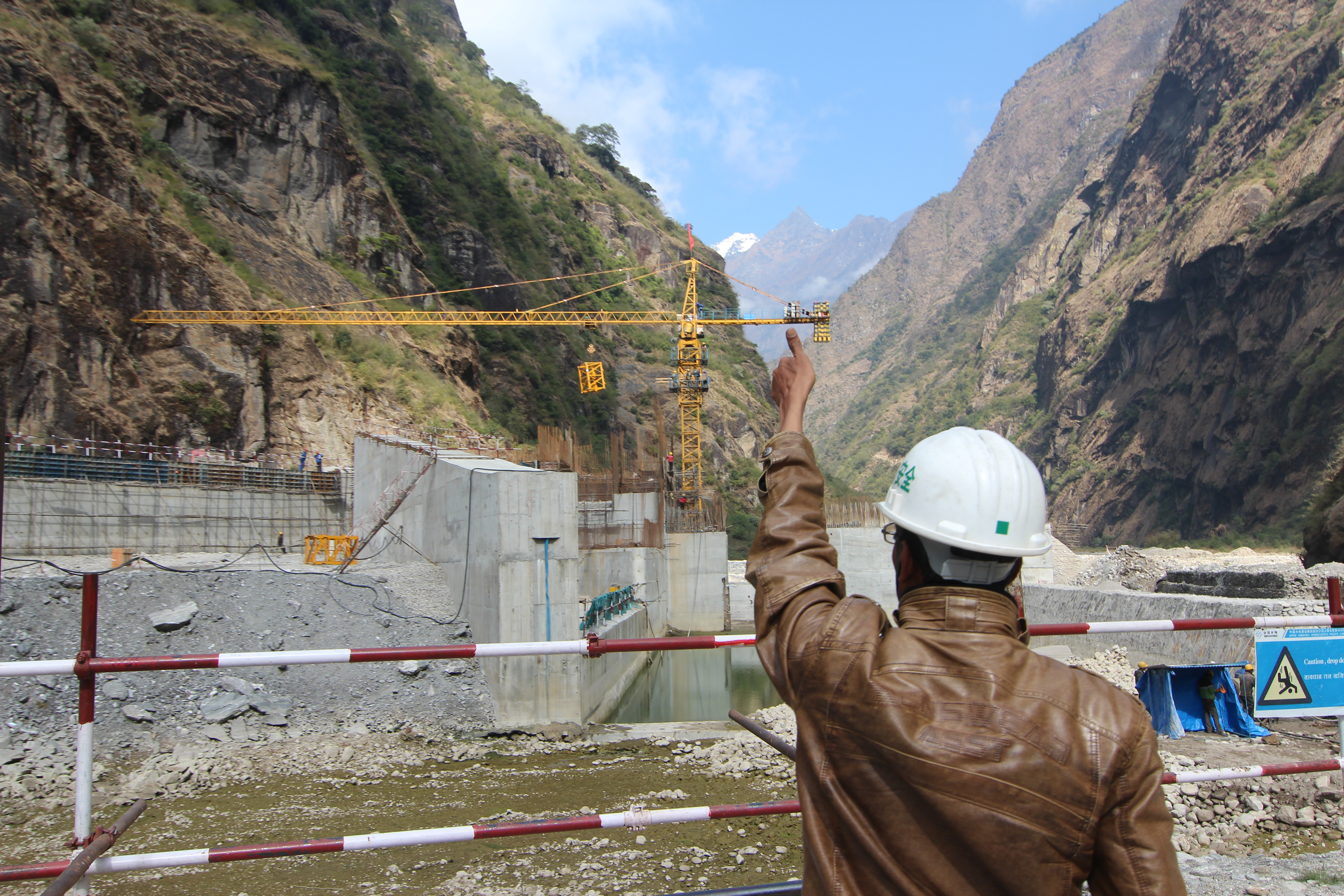 In the aftermath of the 2015 earthquakes, progress toward the stated aim of turning Nepal into a ‘hydropower nation’ has been stalled. How will concerns over heightened risk affect hydropower development in Nepal in the medium and long term?

Construction at the headworks site of the 456MW Upper Tamakoshi Hydropower Project, the largest hydropower project currently being built in Nepal. The April and May 2015 earthquakes caused the headworks to settle an estimate 18cm, though it remains largely undamaged. Lamabagar, Dolakha. 2013. Photo by Austin Lord.

[A shorter version of this article was first published on 14 October 2015 in Cultural Anthropology as part of the series Aftershocked: Reflections on the 2015 Earthquakes in Nepal.]

As of April 2015, Nepal was in the early stages of ambitious plans to develop its significant hydropower potential, yet the earthquakes inflicted substantial damage on the country’s existing hydropower infrastructure: many power plants went temporarily offline and major repairs will be necessary in the coming months on completed and pending projects.

Overall, the hydropower industry sustained estimated losses of US-$ 180m; facilities representing a seventh of the country’s installed generation capacity have been severely damaged; hundreds of miles of distribution lines have to be reconstructed and 600,000 households have lost access to electricity. Beyond that, projects currently under construction will be significantly delayed, as access roads remain blocked and the risks of landslides remains heightened during the post-earthquake monsoon.

Therefore, the government has retracted its recently stated commitment to end scheduled brownouts of up to 14 hours daily by 2018. Hence, in the short term, progress toward the stated aim of turning Nepal into a ‘hydropower nation’ has been stalled. But what about the medium and long term effects?

Construction of the dual desanding basins above the intake for the 456 Upper Tamakoshi Hydropower Project. The project is undertaken by SinoHydro, a major Chinese development contractor and the Nepal Electricity Authority, Government of Nepal. Lambagar, Dolakha. 2013. Photo by Austin Lord.

Nepali employees of the China Gezhouba Group Company waiting at the entrance of the headrace tunnel for the 60MW Trishuli 3A Hydropower Project. Dust from blasting and excavation inside rises above them. 2014. Photo by Austin Lord.

Since 2008, our research has focused on evolving patterns of hydropower development in Nepal, on both built and unbuilt projects. Well before April 25th, some of our conversations with hydropower professionals suggested that the industry was reluctant to discuss the potentialities of seismic risk to hydropower production. Four developers went as far as to say that the economic need for development in Nepal superseded the risk of earthquakes. According to these respondents, earthquakes were a fact of life and should not interrupt or delay rapid development of dams. Another hydropower engineer claimed that: “This is a silly question. All the components will be defined on the basis of earthquake risks.” Thus, he believed seismic activity was a calculable risk that could be managed through technological intervention.

This denial or omission of earthquake potential, on one hand, seemed to point out the ineluctable challenges that Nepal faces in attempting to integrate its economy into global markets, and, on the other, the desire of the private sector to mine value and profits from hydropower in spite of obvious geophysical risks.

In contrast, water activists have been pointing to this omission for years, especially in the context of the common knowledge that the ‘next big one’ was already decades late. With less than 800MW of electricity currently available, the discussion on hydro development in Nepal is very much about forecasting and extrapolating differently imagined futures based on competing claims to information. Whose future vision will prevail?

The earthquake would seem to favor those who advocated for a slower, more deliberative expansion that prefers multi-purpose projects to export-oriented ones that are built solely for electricity production; that favors run-of-the-river projects over large storage/reservoir projects; and that prompts developers to consider the different seismic and geomorphological risks inherent to certain projects. However, free market advocates for expedited development with an eye for export and trade suggest that the quick revenue for Nepal’s recovery and growth is needed now.

Like many large infrastructural contracts in the Global South, large projects in Nepal are public-private partnership agreements, where state and private entities enter into a cooperation to share risks (a structure that relies on cheap financing from state-subsidised banks now in decline in the Global North following the financial crisis). How will new assessments of seismic risk shift these agreements? Central to these debates and their outcomes is the way that seismicity, realised or unrealised, shapes perceptions of financial risk.

At the same time, our own observations from Rasuwa and Dolakha districts also indicate that the hydropower sector played an important role during the disaster-response period, especially in rural areas where local government is lacking. After the earthquake, thousands of people found temporary shelter in hydropower project facilities; the hydropower sector distributed food and tarpaulins to dislocated communities and used machinery to clear obstructed roads; and now hydropower companies are making large commitments to rebuild homes, schools, health posts, and other community buildings as part of their CSR programs. These patterns indicate that perhaps the hydropower sector could play a more integrated role in disaster management and planning.

Hydropower facilities in Sindhupalchowk that were damaged by the Jure landslide in August 2014, indicating that slope failure remains a risk even without an earthquake. 2015. Photo by Austin Lord.

Women from Simle, a village in the project-affected area of the Trishuli 3A Hydropower Project (60MW) have taken up residence in the unfinished offices of the Nepal Electricity Authority near the Trishuli 3A Field Offices in Shantibajaar, Nuwakot. During the post-earthquake monsoon of 2015, more than 110 families from five different villages in Rasuwa took up residence here, while construction works were stalled. Many of these families have since moved to a different IDP camp across the river, and very few have been able to return to their destroyed villages. July 2015. Photo by Austin Lord.

Once the dust settles, literally and figuratively, let us see how this battle plays out in the media, how the hydropower sector accounts for earthquakes, and where policymakers will stand on the issue. One early indication of a possible shift in this discussion is a recent New York Times op-ed co-authored by a leading Nepali politician that argues for more attention to the seismic and ecological vulnerabilities of hydro project sites, against a single-minded focus on hydro and for a stronger concentration on solar power.

This pre-emptive call for re-evaluation indicates that the discourse on disaster preparedness, energy security, and hydropower development is further evolving in Kathmandu as we speak. At a recent Kathmandu event, several hydropower sector actors expressed new views on comprehensive risk assessment and project planning, stating that “we can no longer be complacent” and that “this is the time to rethink”. How will the rethinking of risk proceed?

All of this calls for a serious engagement with the subterranean—with the materialities, instabilities and potentialities of the underground. Future work on hydropower production will have to map a new landscape: whole regions have been devastated and recent developments in the political arena lead us to assume that the quakes will have institutional ramifications as well.

How will the earthquakes affect the relationship between ‘project-affected people’ and the landscapes of hydropower? How will concerns over heightened risk affect their expectations and worries about planned hydropower plants? How will post-earthquake patterns of resettlement and national planning open or foreclose new opportunities for hydropower development? And finally, considering similar patterns of seismicity all over the Himalayas, in what ways might these recalculations and reorientations in Nepal shape the dimensions of the broader Himalayan hydropower frontier?

*Matthäus Rest is a social anthropologist currently teaching at the University of Munich. His research interests include spectral infrastructures in Nepal (unbuilt dams, water pipes, roads) and spectral creatures in Austria (the Krampus).
*Austin Lord is an economic anthropologist and visual ethnographer affiliated with Cornell University. His research focuses on the political ecology of Himalayan hydropower development, shifting patterns of mobility within ‘project-affected populations’, and the finance of hydropower futures. More of his photographic work can be found here.