Green politics, a personal account of some texts and contexts 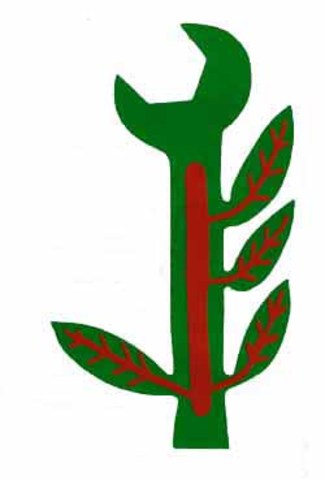 The current international Coordinator of the Green Party of England and Wales tells about his beginning in green politics, his transition from ecologism to eco-socialism and the commons, and the authors that have influenced his thought.

The beginnings of (my) green politics
I joined what was then the Ecology Party in 1980 and in the last 35 years have been active in Green Party and wider green politics.  Here, I try to outline some of the books and other texts that have influenced my understanding of green politics.
My initial inspiration for getting involved was a concern that economic growth was ecologically damaging.  I read Blueprint for Survival (published in The Ecologist by Edward Goldsmith and Robert Allen ahead of the 1972 UN Conference on the Human Environment in Stockholm)which argued for a political response to ecological problems and helped inspire the creation of PEOPLE, which became the Ecology Party and eventually the Green Party.  A series of other writers, including Ivan Illich, helped me broaden my early understanding of Green Politics, and Jonathon Porritt’s Seeing Green was essential to linking environmental concern to social justice, alternative technology, anti-nuclear campaigning, and peace, among other social issues.
Connecting green politics with Marxism
Andre Gorz’s Ecology as Politics first gave me an interest in Marxism.  Gorz argued that economic growth was functional to capitalism, ‘grow or die’ being the principle of our economic system.  Ever since reading this I have been concerned with opposing capitalism and trying to understand Marx’s thought.  Marxist organisation in the 1980s didn’t seem that concerned with a critique of economic growth or ecological politics, so I wasn’t tempted to get involved with them.  Later, Joel Kovel’s The Enemy of Nature  and John Bellamy Foster’s Marx’s Ecology  deepened my interest in and understanding of ecosocialism and Marx’s contribution to ecological politics. Kovel argues convincingly that economic growth is unsustainable and that anti-capitalism is at the core of true green politics.  Bellamy Foster has revolutionized our conceptions of Marx’s thought, showing that from his PhD onwards questions of ecology linked to materialism were at the centre of his work.

Ecosocialism and the commons
Another key ecosocialist text was Alan Roberts’ The Self-Managing Environment, which introduced me to the concept of the commons. Roberts argued that far from being ‘tragic’, common property could be managed in a sustainable way if people were allowed to self-organize the democratic use of land and other resources.  He noted that the commons had often been enclosed and stolen.  The special issue of The Ecologist magazine entitled Whose Common Future? accelerated my understanding of the commons and was, I think, the first place I read about Elinor Ostrom.
The concept of the commons is important to green politics for a number of reasons.  Ostrom suggests that while the environmental concerns of neo-Malthusians are to be applauded, their prescriptions are often naive and oppressive; human beings can, when given the opportunities, often work with their environment to maintain sustainable use. Ostrom, whose Governing the Commons won her a Nobel Prize in economics, was both pragmatic and radically democratic.  She presented environmental issues as problems that we need to attempt to solve collectively, and as subject to research on what works best in particular circumstances.  She also argued that ecological problems are best dealt with through democratic choice, so as to give people a stake in environmental management and to crowd source collective wisdom.  Rather than being explicitly from the left, she read and was inspired to a large extent by market based libertarian economists including Hayek but perhaps most importantly James Buchanan.  She was also highly influenced by the liberal theorist and writer Alexis de Tocqueville.
If we can make goods that last longer and can be shared, the library principle (where we borrow and return after use) is a way of promoting prosperity without growth.  Both Marx and Ostrom were strong on usufruct, the idea of using a resource without wrecking it.  Marx too was fascinated by the commons; for example, chapter 27 of Capital Volume One is a detailed discussion of the enclosure of the English commons.
Ostrom came at these questions in practical and micro ways but was not adverse to the idea that multiple scales of institutional intervention were necessary.  David Harvey and others have tended to argue that the social ecologist Murray Bookchin is a good alternative to Ostrom.  I think that while Bookchin is more left-friendly, Elinor and indeed her husband Vincent provide detailed and stimulating accounts of how we might make radical ecological democracy work, which demand our attention.  I remain obsessive about reading more and understanding the deeper nuances of both Ostrom and Marx.
Spinoza and Althusser
My interest in both Marx and Ostrom has led me to a concern with the origins of their ideas and debates about how we make the commons work and challenge neoliberalism. This in turn has led me to become increasingly interested in the work of the Dutch philosopher Baruch Spinoza.  I have come to Spinoza via another philosopher, Louis Althusser, and have come to see the radical ecology at the heart of Spinoza’s work as an inspiration for Marx. Althusser was the main Marxist philosopher in the 1970s but fell swiftly both personally and intellectually. He is often condemned as a fraudulent or evil thinker.  The Althusserians of the 1970s projected his thought as a largely sterile structuralism, so why should we read him today? I think one reason is that Althusser showed the contribution that Spinoza offers to radical politics.  Both Warren Montag’s introductions to Althusser as well as the philosopher’s writings, especially his later works, have made me aware of a line of thinkers including Spinoza who are materialists, have an ecological analysis –in the sense of relational and anti-essentialist– and blur the boundary between humanity and the rest of nature.  Anti-humanism, rather than being hostile to humans, suggests that we don’t have total free agency and that we are not utterly distinct in the universe.
Spinoza noted that human beings have no kingdom within nature, that we are part of nature.  Spinoza helped inspire Arne Naess’s deep ecology, but I think he has the potential to inform wider green politics. He also sought to link political realism, which takes account of the wider forces that shape what we do and think, with a commitment to radical democracy and the common good.  From the ecological elements in Marx and Engels to their notion that conflict can be politically productive to questions of determinism and change it is possible to see how Spinoza’s themes, whether directly or indirectly, contribute to Marxist thought.
Marx, Ostrom and Spinoza were all political ecologists. Notions that human beings are part of nature and not separate from it were important to all three thinkers.  They also attempted to be pragmatic rather than utopian or idealistic, looking at how in particular contexts, given often overwhelming negative pressures, political change might be advanced.

Concluding thoughts: Deepening and renewing green politics
There are a number of challenges to renewing and making green politics more sophisticated and relevant.  Academic texts and active political engagement often don’t go together.  A realist pragmatic politics can easily degenerate into manipulation, while a politics of pure principle fails to engage in challenging entrenched power structures.  Ideas of ecology may be scientifically naive, and I admit I need to go back and improve my understanding here. Meanwhile, systems of analysis that combine social and natural science can become overly complex. For example, Ostrom combined ecology as a science, institutional analysis, and sensitivity to the constitutive importance of language.  Her analysis is nuanced, but for some critics, becomes far too complicated to easily utilize.  I do, however, feel an ecosocialist politics that notes the challenge of capitalism to the environment, with an emphasis on a commons-based alternative political economy, is useful.  In turn, practical green politics demands a consideration of how this can be advanced in a practical context.  The Chilean political thinker Marta Harnecker talks of how to make the impossible possible, which seems a useful formulation of the problem if we are to deepen and renew green politics.
* Derek Wall is International Coordinator of the Green Party of England and Wales, and is a founder of the Ecosocialist International and Green Left. He teaches economics at Goldsmiths College, University of London, and has written extensively on green politics. His latest books include Economics After Capitalism (2015, Pluto Press), The Sustainable Economics of Elinor Ostrom: Commons, Contestation and Craft (Routledge, 2014), and The Commons in History: Culture, Conflict and Ecology (MIT Press, 2014).
Share