Framing "necessity" and whale-hunting in the Faroe Islands

Can frogs and workers unite? Paul Robbins on conserving biodiversity in the Western Ghats, India 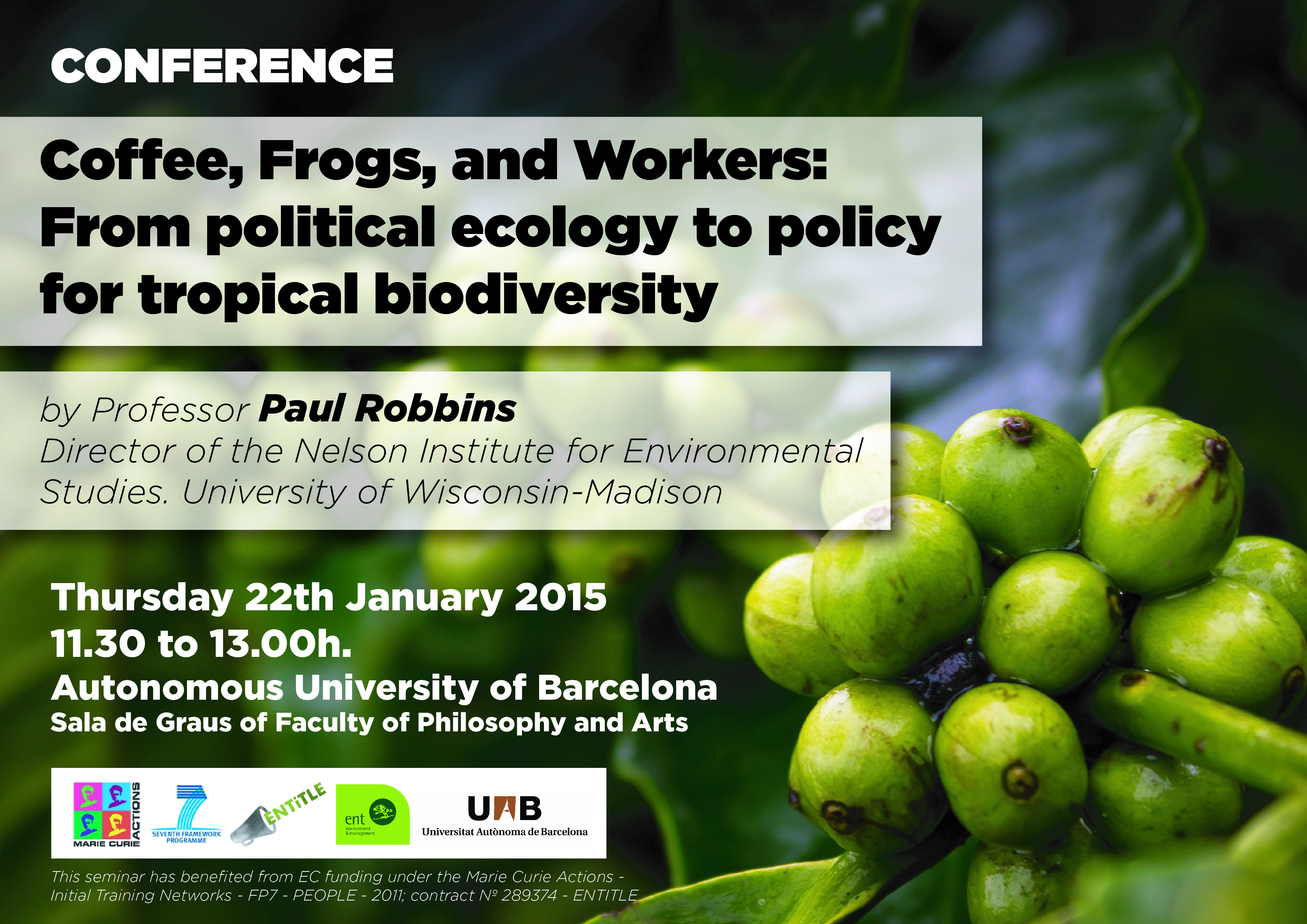 In a guest lecture in Barcelona, political ecologist Paul Robbins invites us to reflect on how market forces and labour’s bargaining power influence farmers’ production decisions, which in turn impact biodiversity conservation. Can environmentalists and workers unite?

On January 22, Paul Robbins, Director of the Nelson Institute for Environmental Studies at the University of Wisconsin-Madison, gave a guest lecture at the Autonomous University of Barcelona titled “Coffee, Frogs and Workers: From political ecology to policy for tropical biodiversity” (see the full video here). The lecture was part of the public activities planned within the ENTITLE specialized intensive course held last 20-23 of January 2015 in Barcelona.

Robbins’ presentation focused on his latest research in the agro-forest landscapes of the Western Ghats Hills in the state of Karnataka, Southern India. As a transition zone between very wet coastal region and the very dry interior high peninsula, this is a very biodiverse region –covering 30% of the flora and fauna species of South Asia– which was recently named as a World Heritage site by the United Nation’s Education, Scientific and Cultural Organization (UNESCO) for its unique ecological characteristics. This is a mecca for conservation biologists: “You cannot throw a frog without hitting a conservation biologist in Ghats”, Robbins joked.

But despite the apparently “untamed wildness” of these hills, a closer look reveals these are not the ‘pristine’ spaces that conservationists and conservation scientists (what Robbins called the “Edenic” sciences) have long revered and sought to protect. Rather, they are essentially anthropogenic environments, produced by farmers growing mostly shade-grown coffee, areca palm nuts, and hand-tapped rubber, acting in response to global market (capitalist) forces, and in interaction with non-human species. They are, in short, landscapes of production and thus of labour.

As Robbins reminded us, this is a signature landscape of the “Anthropocene”, that new geological era marked by ‘human’ (or more accurately, capitalism’s) influence on the environment in which arguably ‘nature no longer exists’, to quote renowned philosopher Slavoj Zizek. In this context the debate about whether we should still strive to protect ‘wild’ or ‘pristine’ spaces is irrelevant. Rather, the question becomes: under what conditions can we find (more or less) biodiversity in this kind of (Anthropocenic) landscapes? And more specifically, what influences farmers’ decisions to conserve more biodiversity?

To answer this question, Robbins teamed up with India’s Center for Wildlife Studies (part of the international NGO Wildlife Conservation Society) and professor Ashwini Chhatre of the University of Illinois at Urbana-Champaign. With the help of graduate students and volunteers, they carried out a species count of amphibians (a very good indicator of ecosystem health) and birds in about 200 plots in the region to determine the biodiversity structure. The findings confirm that despite (or perhaps, thanks to?) the heavy human intervention, the region holds enormous biodiversity, including rare bird species and endangered amphibians, but some areas have more than others.

The biodiversity analysis was coupled with a survey of 1000 local producers, most of which are individual/ family farmers with properties below 1-2 hectares and which sell to intermediaries. The survey sought to pinpoint the economic (market) factors –such as access to credit, membership in cooperatives, and crop prices– that influence production intensification, that is, opening or closing the forest canopy to produce more and cheaper coffee, or increasing the use of chemical inputs.

In this sense, Robbins framed his study as “classic”, “old school” political ecology analysis drawing on the “chain of explanation” approach, advanced by Piers Blaikie and Harold Brookfield in Land Degradation and Society (1987), one of the field’s founding texts. The approach posits that understanding producers’ decisions should be done through a multi-level analysis, beginning with the relation of producers to each other and to local and regional markets and other institutions, all the way to the national government, the global market and international institutions (see also Robbins’s 2008 article in Geoforum).

So, what drives producers’ decisions on how and what to grow in the Western Ghats agro-forested landscapes? As expected, variability of crop prices appeared as one of the main factors. For instance, when Arabica and Robusta coffee prices are similar, farmers tend to choose the latter, leading to more pesticide use and a more open canopy, and less biodiversity.

However, the big surprise was the role of labour: producers consistently complained about the increasing bargaining power (and costs) of farm labour, which they are likely to offset by reducing production costs in ways that impact biodiversity, e.g. changing to a less labour-intensive crop, increasing pesticide use or opening the canopy. Robbins posited that this is a result of an unexpected absolute labour scarcity in the region (and arguably in other regions of India) resulting from migration to the cities, coupled with a low fertility rate.

This observation that “capital doesn’t always have an endless supply of labour” qualifies political ecology’s (and Marx’s) longstanding aversion towards an emphasis on population dynamics. Moreover, the arrival of these labour contradictions –arguably deferred since colonial times by abundant labour– implies a displacement of biodiversity for labour. As Robbins succinctly put it: “if you can’t beat the hell out of labour, you can beat the hell out of nature”.

In his conclusions, Robbins ventured into analysing what policy solutions may help address this problem, assuming we want biodiversity and recognizing farmers’ desires to stay in the land. He made the case that the most viable option would be to increase support from the smallest, self-employed farmers, which are not caught in this labour-nature trap. Another option would be to increase other sources of income associated to biodiversity – in fact, already the second source of income for farmers in the region are ‘bed and breakfast’ for ‘city techies’ who come to consume the landscapes and their biodiversity.

Other possible interpretations of this problem and its solutions would require a deeper analysis of different factors that may also influence production decisions: for instance, the role of women and of community norms and rules regarding biodiversity. But this should not detract us from Robbins’ invitation to go back to the basics –an emphasis on capitalist market forces and labour dynamics– to understand the challenges and potentials of joining biodiversity conservation and workers’ rights in the Anthropocene. While in the Western Ghats labour’s increased bargaining power seems to be in tension with conservation objectives, this need not always be so: as ENTITLE professor Stefania Barca recently argued in a post in ROAR magazine, worker struggles –such as the famed rubber tappers movement of Chico Mendez and co. in the Amazon– have in some contexts historically overcome this nature-labour contradiction, leading to the call: “workers and environmentalists unite!”

Note: Watch this video to hear Paul Robbins’s reflections on why the question of labour is important for political ecology.