The Discourses of Environmental Disaster 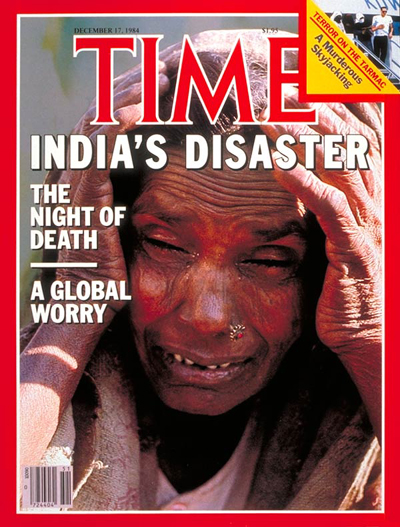 Bhopal […] occasionally returns. Other cases of ‘environmental disasters’, other victims are still waiting for compensation. Precarity and political responsibility is yet not taken seriously outside commercial and geopolitical cartography.

Decades ago I was struck by the discursive space allocated in a report in the December 17th, 1984 issue of Time Magazine on thousands of deaths from a toxic chemical release at Union Carbide’s plant in Bhopal, India. The cover image, which showed the bodies of the dead and dying, was located under a headline that read “Environment.” The implication of that editorial decision, which bids the reader to flip past the sections on politics in order to find the report in the environment section of the magazine, was that the Bhopal incident should be understood as a pollution accident. Reacting to Time Magazine’s framing of the event, I wrote: “One can speak usefully here of a kind of ideological scripting of the allocation of danger around the globe. Within this scripting, controlled by the dominant modes of representing problems of foreign policy and international politics, events involving the use of weapons against foreign nations on their soil get recruited into the foreign policy discursive space, while killing them with pesticide chemicals does not…”

As I considered the trajectory of media coverage after Hurricane Katrina hit New Orleans, creating a water surge that inundated 80% of the city, I was moved to think again about the Bhopal incident and to consider more generally how the news media create the events that are constituted as “disasters,” as they focus on the immediacies of suffering and mortality and allocate responsibility. Typically, while the sudden violence of armed attacks tends to be located in the discursive space of politics, the evocation of a political vocabulary tends to be missing in the case of industrial “accidents” and other poisoned environments and in long term conditions, the “slow violence,” that make them possible.

Rob Nixon refers to this as the gradual forms of deadly attrition from the environmental degradation caused by unregulated capitalism, starvation owed to both structures of inequality and violent conflicts that destroy food sources, and the lethal zones left with toxicities, mines and other unexploded military ordinance in the aftermath of wars. Moreover, there are implications of the temporal rhythms of news media in the aftermath of episodes of death and suffering. Not surprisingly, the Bhopal event disappeared from the news shortly after the immediate effects were recorded. As one of Milan Kundera’s fictional characters from the novel Slowness puts it, “No event remains news over its whole duration, merely for a quite brief span of time, at the very beginning. The dying children of Somalia whom millions of spectators used to watch avidly, aren’t they dying anymore? What has become of them? Have they grown fatter or thinner? Does Somalia still exist? And in fact did it ever exist? Could it be only the name of a mirage?”

Bhopal, however, occasionally returns. In May of 2004, twenty years after the toxic gas leak, The Christian Science Monitor reported that in response to “new environmental studies,” the Indian government is preparing to hold Union carbide responsible for polluted ground water that is “affecting a new generation of Bhopal citizens.” Testifying to Union Carbide’s continuing avoidance of responsibility, in December 4, 2004, an article appeared in the Taipei Times, reporting that “two decades after the world’s worst-ever industrial accident, many of those who survived injury are still waiting for their compensation.”

Union Carbide’s posture toward the victims of its outsourcing of dangerous work is typical of large US corporations. For example, The New York Times reported on November 23, 2013 that, “One year after the Tazreen factory fire in Bangladesh [in which more than 1200 workers died] …neither Walmart, Sears, Children’s Place nor any of the other American companies that were selling goods produced at Tazreen…have agreed to contribute to the efforts [Ango-Irish and Dutch-German companies that are involved in “getting long term compensation funds off the ground”].

As I have suggested, the Bhopal incident (and similar ones) reveal complex relations among governments and commercial enterprises, located within a “policy dynamic that links strong and weak states… [and harbors an] invisibility, the absence of a cartography of occupational danger,” while the dominant cartography, which achieves public attention, is geopolitical/security oriented. The precarious lives of those in unsafe occupations belong to what the novelist Michel Houellebecq refers to as a different map: “…free-market economics redrew the geography of the world in terms of the expectations of the clientele, whether the latter moved to indulge in tourism or to earn a living. The flat, isometric surface of the map was substituted by an abnormal topography where Shannon was closer to Katowice than to Brussels, to Fuerteventura than to Madrid.” That commercial cartography has been no more sensitive to precarious lives than the security oriented version in evidence in The Pentagon’s New Map. Suffice it to say that a discourse of environmental accidents, in which humans face the vagaries of the elements (fires, water surges, chemical spills, etc.), tends to trump the political economy of inequality and structures of dominations and control. That latter discourse, within which a different mode of responsibility would be enjoined, fails to achieve adequate enough traction to either protect or adequately compensate victims.

If one takes a perspective that extends the temporality of vulnerability beyond the occurrence of so-called environmental accidents, the very concept of the accident has to be displaced by a thematization of precarity. As Neil Smith has put it, “there is no such thing as a natural disaster. In every phase and aspect of a disaster – causes, vulnerability, preparedness, results and response, and reconstruction – the contours of disaster and the difference between who lives and who dies is to a greater or lesser extent a social calculus. Hurricane Katrina provides the most startling confirmation of that axiom.” Smith suggests that we should “put social science to work as a counterweight to official attempts to relegate Katrina to the historical dustbin of inevitable ‘natural’ disasters.” Here, I’ve put to work some examples from popular culture, rather than social science. They nevertheless support Smith’s emphasis on differential modes of “vulnerability”. As he notes:

“Put bluntly, in many climates rich people tend to take the higher land leaving to the poor and working class land more vulnerable to flooding and environmental pestilence. [Moreover]… In New Orleans…topographic gradients doubled as class and race gradients, and as the Katrina evacuation so tragically demonstrated, the better off had cars to get out, credit cards and bank accounts for emergency hotels and supplies, their immediate families likely had resources to support their evacuation, and the wealthier also had the insurance policies for rebuilding.

* Michael J. Shapiro is a Professor, philosopher, and writer currently teaching at the University of Hawaii. His work is often described as “postdisciplinary,” drawing from diverse fields (critical theory, cultural studies, film, literary theory, African American studies, geography, psychoanalysis, indigenous politics etc.) He has published extensively in various journals and to name only very few of his famous books, we refer to the very recently published War Crimes, Atrocity, and Justice as well as Violent Cartographies, Cinematic Geopolitics, Methods and Nations, For Moral Ambiguity, Sovereign Lives. During his long teaching career, Shapiro has taught a variety of creative post-disciplinary courses both in the US and in Europe and invited students to reflect on the way in which art produces relevant texts for critical political analysis.