I am now back in Santiago de Chile, after spending six intense weeks doingfieldwork mainly in the province of Arauco (Southern Chile), researchinga second case study for my PhD thesis on the political ecology of forest fires. I am an environmentalist and environmental scientist with training in psychology and therapy. That’s why in my academic work I also aim to deal with or to be aware of “the emotional” in environmental conflicts. This may sound strange and perhaps difficult, both in theory and in practice. However, these weeks of fieldwork have shown me that in order to talk about emotions in the context of environmental conflicts, one does not need to go faraway: doing research and doing fieldwork, being a white, single, “academic” woman in a rural-indigenous context provides lots of “political” information, but also emotional, and both of them talk about the geographies of power, inside and outside of us “subjects”.

When reading books or papers on environmental conflicts, I used to be surprised how authors are so clear on how the conflict develops, and how the different social actors are pushing for concrete socio-metabolic, political or economic interests. I know every paragraph of a book or paper implies hours of observation, action research, discussion and rewritings. I suppose that through this process we aim to rationalize what we write in order for others to understand us, and make it “replicable” or “universal”. But… What has happened during that research process? How do we relate our own emotions to the conflict, to diverse actors, and to the personal and political circumstances of diverse actors in a conflict? During these past intense weeks, apart from conducting more than 40 interviews with diverse social actors- private forestry enterprises managers, firefighters, indigenous authorities, peasants, etc.-, participating in indigenous ceremonies and observing management of local conflicts, etc., I have also been my own subject of study. This experiment had a clear result for me: doing fieldwork is an emotional labour/effort, i.e., being engaged in research and doing fieldwork on environmental conflicts imply dealing with emotional realities, from our own and from people we engage with. Until what point are we able to deal with emotions during fieldwork? How can we identify them? What do these emotions say about the conflict, about the way we relate to the research, to ourselves? The reasons why I decide to talk about this are diverse: 1. It is therapeutic for me, in the emotional sense, but also in helping me ‘process’ what I have learned. 2. It can be therapeutic for others, 3. If I pretend to talk about the emotions in environmental conflicts, i.e. about others’ emotions, how can I do it without caring about or addressing my own emotions? Only if I am open and able to feel, I can feel what the others are feeling.

Being in the field, I remembered reading the paper of Laia Oliver Frauca¹, on women feeling fear during fieldwork, and how this fear is related to the social construction of women. In the social sciences, it was feminist methodology that made the role of the researcher’s emotion explicit to the research process. In my case, and taking advantage of the fact that I am writing for a blog, and not for an academic paper, I have tried to tackle this in a kind of phenomenological way, that is, just talking about my emotions, no theory underneath. However, I know that in order to identify them, I am influenced by my training as a Gestalt Therapist. I will not describe Gestalt², mainly because one of its core ideas is that there is not a clear text, paper or theory to be discussed. In Gestalt, our objects and tools come from our own and our relational experience. This may sound quite anti- academic, I cannot use a theoretical text in order to explain what emotions are or which kind of emotions exist. So, you just have to trust me. My first mentor of my training, Marcelo Antoni (who was previously trained as a psychoanalyst) used to talk about emotions as general psychologists do: based on 4 basic emotions: joy, sadness, fear, and anger. This is a description based on Basic Psychology, rather than “pure” gestaltic (in the case this exists). I will use this categorization not because I consider it the most suitable, but because it enables me to talk about this without having to share all my fieldwork notes (something that would expose me far too much). 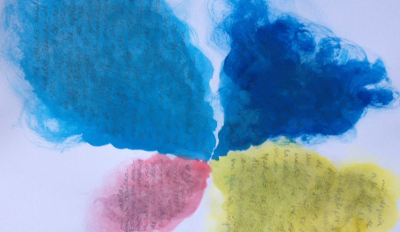 Emotional map of my fieldwork. The size of the coloured area implies approximate frequency of different emotions during 6 weeks of fieldwork. Blue refers to fear, purple to sadness, yellow to joy, and red to anger.

Reading back my notes on my different emotions during fieldwork I realize that being aware of these emotions was facilitating my self-reflexivity, on the personal, academic and political (with its flurry frontiers). When I was relating to indigenous Mapuche communities, I discovered emotions related to the questions I was asking to myself about my own identity, especially regarding my contact with them: I felt fear to feel isolated when I was first invited to attend to an indigenous meeting. This feeling was transformed into joy, when I had good communication experiences , when I met people wanting to share their culture with me, when I was invited to participate in a ceremony. In those cases, I realized I had anxiety of being the “other”. On the other side, being a single woman in a sexist scenario, and having a male friend who did not have a sexual purpose for me, was a source of joy too.

Other emotions speak of the fact of being in a conflictive scenario. I wasscared when I found myself, alone, in highly militarised areas, getting to know people who have publicly legitimized the use of violence against forestry enterprises. I was also feeling fear, when young activists were saying to me that my telephone will be now probably tapped. I also felt sadand empathized with the fear of people being scared by the violence due to the conflict. Realizing the magnitude of a historical conflict, where a PhD student has little to do and maybe even to understand, anger and sadnessmixed and were transformed into impotence sometimes.

Being aware of the inequalities and environmental burdens that Industrial tree plantations imply locally for the maintenance of the globalcommodity chain, i.e. my own political ecologist perspective, was also enriched by emotions during fieldwork. I felt sad when locals told me how there were no other alternatives in the area rather than planting trees, and also joy sharing a meal with a peasant that aimed to maintain a garden between tree plantations. I felt anger through claustrophobia when travelling with a nonstop euca-pine landscape and in that sense I felt empathy to the anger of those who set fires as one way to express dis-conformism. 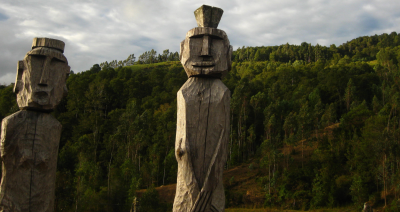 Piece of land in dispute between Mapuche owner and a Japanese forestry industry, Tirua (Arauco, Chile)

Given the vast quantity of people now engaged in the research of environmental conflicts, I am sure that if we create the opportunities to share emotions related to them, we give them space to be acknowledged. As Hubbard et al. (2010) say³,the point is not to push out emotion from research but the opposite: emotions as inseparable experiences of our research, as driving forces of both engagement and paralysis in our research projects, in our compromise, in our activism. In contexts of environmental conflicts and social movements, where emotions usually fuel activism, enabling to talk about or to be aware of emotions can be not only therapeutic and helpful for the reproduction of our labour, but also promoting complementary ways of knowledge for the environmental justice we aim to embrace.