The political ecology of Cornelius Castoriadis 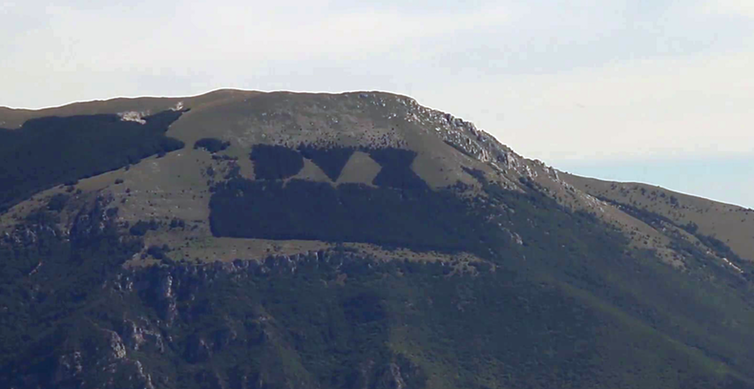 Can a forest be fascist? This may seem a facetious question, but it is one that Italians have been discussing of late due to a fire that occurred at the end of August 2017.

This article was originally published on The Conversation.

A fire recently tore through an Italian memorial to Mussolini made of trees. Source: meteoweb.eu.

The fire, allegedly started accidently by someone cooking tomato sauce, burned down part of a historic and controversial forest on the slopes of Mount Giano, about 100km north-east of Rome. The 20,000 fir trees here, spread over eight hectares, were planted between 1938 and 1939 by recruits studying at the academy of the forestry corps in the small town of Cittaducale. They were a homage to Mussolini: planted in such a way so that from afar, they read DUX, the fascist leader’s title in Latin. And some want to replant it.

This story brings effectively together two major recent issues of debate: forest fires and the removal of inappropriate, “disturbing” monuments. In this instance a politically incorrect monument has been (partially) destroyed by one of the many forest fires that, every year, hit central and southern Italy. This past summer was particularly dramatic, with more than 70,000 hectares of Italian forest destroyed by fires.

However, this forest is not just any forest, but a prime example of the fascist appropriation of landscapes to mark a regime’s domination on both the country and its nature. The fact that this forest survived decades of neglect and a first attempt at getting rid of it in the 1950s has allowed it to become a powerful symbol for neo-fascist groups, who gather publicity by defending its historic value.

So should we see the forest first and foremost as a forest, a natural landscape that perhaps should be restored, or as a disturbing memory of Mussolini? Ought we to recreate the forest, as a preservation of the memory of the country’s history? Or should we leave it to its destiny and forget about it?

In 1998, the centre-left regional government allocated 260m liras (about €130,000) for the restoration of the forest. Although the aim was to promote the forest while writing over the text with the growth of new plants, it still ignited a heated debate, which even reached the national parliament, but ultimately ended without further consequences.

Then in 2004, the new regional government, led then by a far right politician, who had never hidden his sympathy for fascist ideology, started to restore the writing. For him this woody DUX seems to be quite an obsession; after the recent fire, he proposed a public collection of funds and the mobilisation of citizens in order to restore the forest. The region is now ruled again by a centre-left coalition, less committed to the conservation of this fossil of fascist forestry.

This controversy feeds into a broader discussion in Italy over the conservation of fascist monuments and the public display of nazi-fascist symbols. This debate, which has been growing in Italy in the last few years, parallels the US debate on the removal of Confederate monuments.

But there is something unique about the DUX forest. This is not a monument made of concrete and bricks, but memory inscribed into the landscape. The fire provides an opportunity to reflect on the natural and cultural legacies that are embodied in landscape, whether a vast burial field remembering the fallen of the war or even a national park set up in a border region to mark the state’s control over the area. Ghosts of the past are everywhere, not just in the more obvious human-made memorials. The stories with which they haunt the world are the lens through which we interpret the landscape.

On clear days and with snowfall, the DUX forest is visible above the roofs of Rome. Source: magociclo.blogspot.com

Recreating past symbols as they are is not just conservation, but rather an action with much symbolic and political value. So we are not sure whether there is any defensible reason to replant a hideous symbol of fascist rule, especially considering that foresters themselves are starting to reconsider whether reforestation is the right answer to fires.

Recent studies in forest ecology support the idea that replanting is not the best way to have an area recover from forest fires if the aim is to improve species variety: leaving the area to natural regrowth processes seems a better route to a sustainable and resilient forest. Plantations (such as the original DUX forest) are prone to burn again due to lower biodiversity. The variety of available plants, in particular the presence of more broadleaves, in fact would reduce the overall flammability. Additionally, the area selected by fascist foresters for the DUX script was a calcareous, barren landscape, which may not be suited to supporting woodland in the long term anyway.

Given all this, one wonders why the Italian public should fund the maintenance of the forest – especially in its fascist shape. Instead, the fire should be seen as an opportunity to explore other ways of critically preserving contested memories without being forced to maintain or even recreate odious monuments. An example of how something like this could be achieved by using augmented reality and social media is provided by the Digital Wonderland prototype app developed, in a completely different historical and social setting, for Yellowstone National Park. The idea would be to be able to superimpose, on the screen of your smartphone, historical elements and related contextual explanations on the landscape.

Nature is made up of memories as much as of rocks, trees, and soil. We need to imagine a critical preservation of controversial memories, such as those haunting Mount Giano, one which does not reproduce oppression and hierarchies but frees the hidden stories of resistance and liberation.

Because of course, it was not tomato sauce that caused Mussolini’s own disappearance.

Teufelsberg, Berlin: a man-made hill made from the rubble of World War II. Source: wallpapercrafter.com.

Wilko Graf von Hardenberg is a Senior Research Scholar at the Max Planck Institute for the History of Science in Berlin. Marco Armiero is the Director of the Environmental Humanities Laboratory at KTH Royal Institute of Technology in Stockholm.