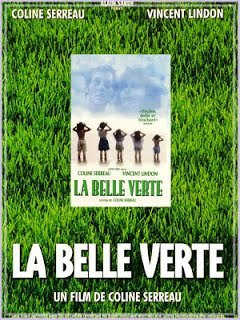 Primitivist utopias in Coline Serreau’s film La Belle Verte and in Aldous Huxley’s book Island suggest modernity is incompatible with the achievement of green and fair ecologies because of the ways in which it artificially disconnects us from the greater whole to which we belong, hence from other humans and non-human nature.

Modernity is increasingly being questioned in debates around ecosocialism and post/non-capitalist ecologies. Recently, several scholars and activists have critiqued ecomodernist socialism and fully automated communism for failing to seriously consider the ecological and class implications of technology-driven progress, and for preventing ecofeminist critiques to penetrate in these imaginaries of change (Angus, 2017; Barca, 2018; Vasintjan, 2018). In line with these efforts I would like to reflect here on Colline Serreau’s film La Belle Verte and Aldous Huxley’s book Island, which expose the incompatibility between modern “progress” and the construction of green and fair ecologies. By looking at everyday life in modern societies through the eyes of non-moderns they illustrate the various ways in which modernity alienates humans from what Marx called their species-being, that is from our own bodies and from our connection to the rest of human beings and the non-human universe.

Island tells the story of Will Farnaby, a British journalist who accidentally arrives on the island of Pala, where Buddhist philosophy and “primitive communism” form the basis of social and ecological relations. His visit to this island entails both, the discovery of a new society and an encounter with modernity through the critical eyes of Palanese people. La Belle Verte takes its name from a utopian planet where anarchy is the basis of human relations and the modernist ideal of progress is inversed. Its inhabitants define the industrial era as “competition, mass production of useless objects, wars, nuclear technology, diseases without cures, in sum, a prehistoric period!”. The film tells the story of a Belle Vertian woman called Milá in her visit to Paris, where she often “disconnects” earthlings from modern consciousness, making them mentally advance 500 years.

Contrary to the fully automated communist ideal, in Island and La Belle Verte wellbeing and environmental protection equal austere and “primitive” lifestyles organised through communitarian relations. Belle Vertians and Palanese obtain their needs by transforming nature (and hence polluting) as little as possible. They are proud manual labourers who produce what they eat, heal themselves with plants and rely as little as possible on imported goods. Such respect for nature in these societies is associated to a broader culture that emphasises humans’ belonging to a greater whole, and at the same time, diversity. For example, in Pala (p. 202):

‘[…]adolescents are helped to experience their transcendental unity with all other sentient beings and at the same time they’re learning, in their psychology and physiology classes, that each one of us (not only humans) has his own constitutional uniqueness, everybody’s different from everybody else’.

This holistic consciousness encourages individuals’ responsibility, making unnecessary the use of police methods in the maintenance of communitarian relations.

‘[…] We teach children love and confidence, but…they’re made to understand that Pala isn’t Eden. It’s a nice place all right. But it will remain nice if everybody works and behaves decently’.

This is why Palanese define communism as ‘voluntary associations of men and women on the road to full humanity’ (p. 171). Similarly, for Belle Vertians it is nobody and, at the same time, everybody, who rules their planet. They relate to each other in egalitarian and gentle ways, and feel sorry for earthlings’ superiority complex and reliance on hierarchies . Thus, when Milá “disconnects” the head of an obstetric unit of a Parisian hospital, he confesses his ignorance about deliveries to a mid-wife (who is behind him in the labour hierarchy). Unafraid of his lack of knowledge about the subject, he starts asking a postpartum woman about her experience of delivering a baby.

By illustrating their negative effects on individual’s freedom and maturity, Serreau and Huxley also defetishize key cultural elements and symbols of progress in modern Western societies, such as medicine, music, sport, academia and the cult of beauty. Through a dialogue between Milá and a woman who explains her reasons for using lipstick, La Belle Verte exposes how women are pressured to be attractive to everybody in modern societies. In the middle of a match, “disconnected” football players hug and dance with referees and members of the opposing team. “Disconnected” musicians who break the order of a classical music concert, jumping on their chairs, dancing, improvising and playing other music styles.In Island Western medicine is critiqued for focusing on cure while doing little about prevention and keeping people well. Western education is also questioned as a Palanese man describes his encounters with academics in the UK (p. 208):

‘[…] I was thinking of two people I met when I was at Cambridge. One of them was an atomist physicist and the other was a philosopher. Both extremely eminent. But one had a mental age outside the laboratory, of about eleven and the other was a compulsive eater with a weight problem he refused to face. Two extreme examples of what happens when you take a clever boy, give him 15 years of the most intensive formal education and totally neglect to do anything for the mind-body related with the learning and the living’.

Such lack of emotional and physical training in modern societies is continuously illustrated in La Belle Verte and Island. Whereas BelleVertians and Palanese people are emotionally wise and practise physical as well as mental exercise everyday, Western urbanites are portrayed as sitting-addicts who lack empathy and are easily irritated. In contrast and in line with contemporary indigenous and feminist movements, for Huxley and Serreau advanced societies are those where kindness and affection are a central element of everyday socio-ecological relations. In the following paragraph a Palanese woman shares with Will Farnaby Palanese people’s techniques for treating babies (pp. 189-190):

‘[…] Stroke the baby while you’re feeding him; it doubles his pleasure…Then, while he’s sucking and being caressed, introduce him to the animal or person you want him to love. Rub his body against theirs. Food plus caress plus contact plus good equals love. And love equals pleasure, equals satisfaction’.

In these utopias progress also means better ability to pay attention to our selves and our non-selves, hence better ability to notice the importance of and beauty in other humans and non-human nature. In Island, Palanese birds constantly tell Will the word ‘attention’ and in La Belle Verte after being disconnected from modern consciousness, the obstetrician starts admiring his colleague’s curly hair; a Parisian woman becomes deeply interested in the shapes of a lettuce leaf; and a man who had just become irritated after having received a minor dent in his car starts hugging trees and people while thanking them.

Technologies symbolise human progress and wellbeing, and so do cities, petrochemicals, western medicine and academia. But, do modernist approaches to ecosocialism really consider the social, environmental and emotional costs of everything that represents modernity? Huxley and Serreau’s reply to this question would obviously be “no”. I fully concur with them, in that the basis for dreaming and building healthier socio-ecological systems are RELATIONS: healthier (and hence non-exploitative) relations to our own bodies, other humans and non-human nature, that is, to the greater whole to which we belong. This means defetishizing capital and everything that represents advancement in the Western world today. More importantly, it means conceiving ourselves holistically within and beyond the sphere of material production, making care a central aspect of our social and ecological relations. As Island and La Belle Verte show, this “re-connection” to the greater whole to which we belong will not fully take place unless we refuse to key elements of modernity such as technologies, hierarchies and consumerism and we voluntarily adopt communitarian economic systems based upon an even distribution of work.

Rocío Hiraldo’s research focuses on workers’ responses to emerging green economies. Her most recent publications can be found in Journal of Agrarian Change and Human Geography.