Bolivia: the ever-expanding frontier of extractivism

By bringing to the fore the affective, bodily and narrative dimensions of environmental injustices, the project Toxic Bios aims to open new paths of collaborative research and grassroots activism focused on “guerrilla narratives” and counter-hegemonic storytelling

Newman (2012) defines Toxic Autobiographies as a literary genre in the US second-wave environmental writing, meaning a distinct product of marginalized groups denouncing the environmental injustice in which they feel trapped. Toxic autobiographies are a prototype of counter-history, which aim to sabotage mainstream toxic narratives particularly those which reproduce or silence injustice through counter-hegemonic storytelling. The toxic writers seek to uncover everyday life stories from the environmental margins, through the blending of narrative and history, science and politics, personal and collective.

Activist Monica Nilsson, standing in front of a picture of herself in the memorial museum of Teckomatorp, Sweden where BT Kemi illegally buried several hundred barrels of toxic waste underground. Photo by Ilenia Iengo

In recent years, Political Ecology scholars and practitioners have investigated the material and affective aspects of environmental conflicts. Traditional political ecological tales of environmental justice have focused on the political and economic metabolic processes that shape spatialized inequalities. Instead, current investigations on Affective/Emotional Political Ecologies and Political Ecologies of Health and Disease embrace a narrative and material turn, by showing the vibrant matter of contamination and bodily experiences.

The 2015 International Handbook of Political Ecology contains two chapters dealing with dimensions of affect, emotions and corporeal Political Ecologies. On the one hand, Farhana Sultana explains how Emotional Political Ecology “investigates socio-environmental conflicts terrain of contested embodied emotions feelings and lived experiences as much as property rights and entitlements” (2015: 634). On the other hand, Allison Hayes-Conroy and Jessica Hayes-Conroy argue for what they call “Political Ecology of the Body: A Visceral Approach”, proposing that Political Ecology investigations on health and medicine must acknowledge the human body as interconnected to other bodies, such as the cultural, animal, technological and political. In other words, what Stacy Alaimo calls trans-corporeality in her seminal book “Bodily Natures: Science Environment and the Material Self”. The feminist environmental humanities scholar provokes us and provides an account of different disciplinary works, literary writing and struggles about/of the corporeal through the inter-connected, unexpected trajectories of a matter entangled in politics, economics, and culture. In his work on the allergies in the US society, Breathing Space, the environmental historian Gregg Mitman explains this intertwining of body, environment, and politics:

… the places where Americans have struggles to breathe, as well as the spaces they have created to breathe more freely … have been shaped not only by the ecology of animal, insect, plant, and man-made allergens, but also by the unequal distribution of wealth and health care in American society.

Toxic Bios lies here, at the intersection where narratives of socio-environmental injustices, of contested science and emotions, and of perceptions and knowledges, blend.

Enzo Tosti, a key activist of the Stop Biocidio network in the Land of Fires of Campania (Italy), stands in front of a wall saying “contaminated area”. Photo by Mauro Pagnano

In order to stay at this intersection and blend those various narratives, the project bridges between the current Political Ecology interest in affect and the body and the Environmental Humanities multi-modal approach to storying. Toxic Bios predicates on the assumption that we live in the age of the Wasteocene, an epoch deeply marked by the capitalist extraction of profits from the wasting of life. As corollary, while the Anthropocene implies the search for its traces in the geosphere, the Wasteocene must be searched into the organosphere because its traces have been accumulated into the tissues and cells of humans and more-than-human beings. Toxic Bios’ focus on the corporeal narratives of contamination and the storying of everyday lives at the environmental margins contributes to a radical critique of the Anthropocene discourse and its organization of uneven spacialities/temporalities. The temporal and spatial complexity of storying a person’s bodily encounter with socio-environmental injustices implies the clash/overlap of multiple narrative time-scapes: the biological, the personal, and the collective. Telling one’s own story always implies to negotiate among those different time-scapes.

Thereby, Toxic Bios does not aim to be only an exploration of private toxic stories; instead we want to make sense and engage with the articulations of personal and collective time-scapes, and we believe it can/must be done through the means of storytelling. “Guerrilla narrative” is the methodology we engineered throughout Toxic Bios, meaning a strategy aiming at occupying mainstream narratives with the counter-hegemonic storytelling of the embodied experiences of toxicity and wasting. Guerrilla narrative can also be considered an expansion of the oral history methodology to include word-based memoirs, images, videos, audio recordings, and different forms of art among the different storytelling tools. Moreover, the expression guerrilla narrative implies the exercise of storytelling as a deliberate counter-hegemonic strategy, with an explicit political aim.

Maria di Buono, wife of Michele Liguori, the policeman working in the Land of Fires that died of cancer. Photo by Giovanni Mussolini during the story recording session hosted by Women of August 29 social movement in Acerra (Italy)

Why telling a toxic autobiography?

The project has an online platform www.toxicbios.eu where the Toxic Autobiographies generated by users are shown through a geo-referenced interface.

The EJAtlas has been the inspiration for Toxic Bios and we are proud to acknowledge our intellectual debt to them. We hope the extensive work of the EJAtlas and the newly born Toxic Bios to be complementary compendiums/archives in the mapping and storytelling of socio-environmental conflicts. On the one hand the EJAtlas provides a crucial database, while on the other Toxic Bios wants to recover the historical and narrative depth of environmental (in)justice, not only occurring in places but also in the lives, bodies and memories of people. We believe silencing those memories, erasing them from the collective past and the material landscape, is parcel of the very injustice imposed on nature and subaltern people. The challenge of environmental justice is also a challenge for a narrative justice which can heal the toxicity of silenced experiences. 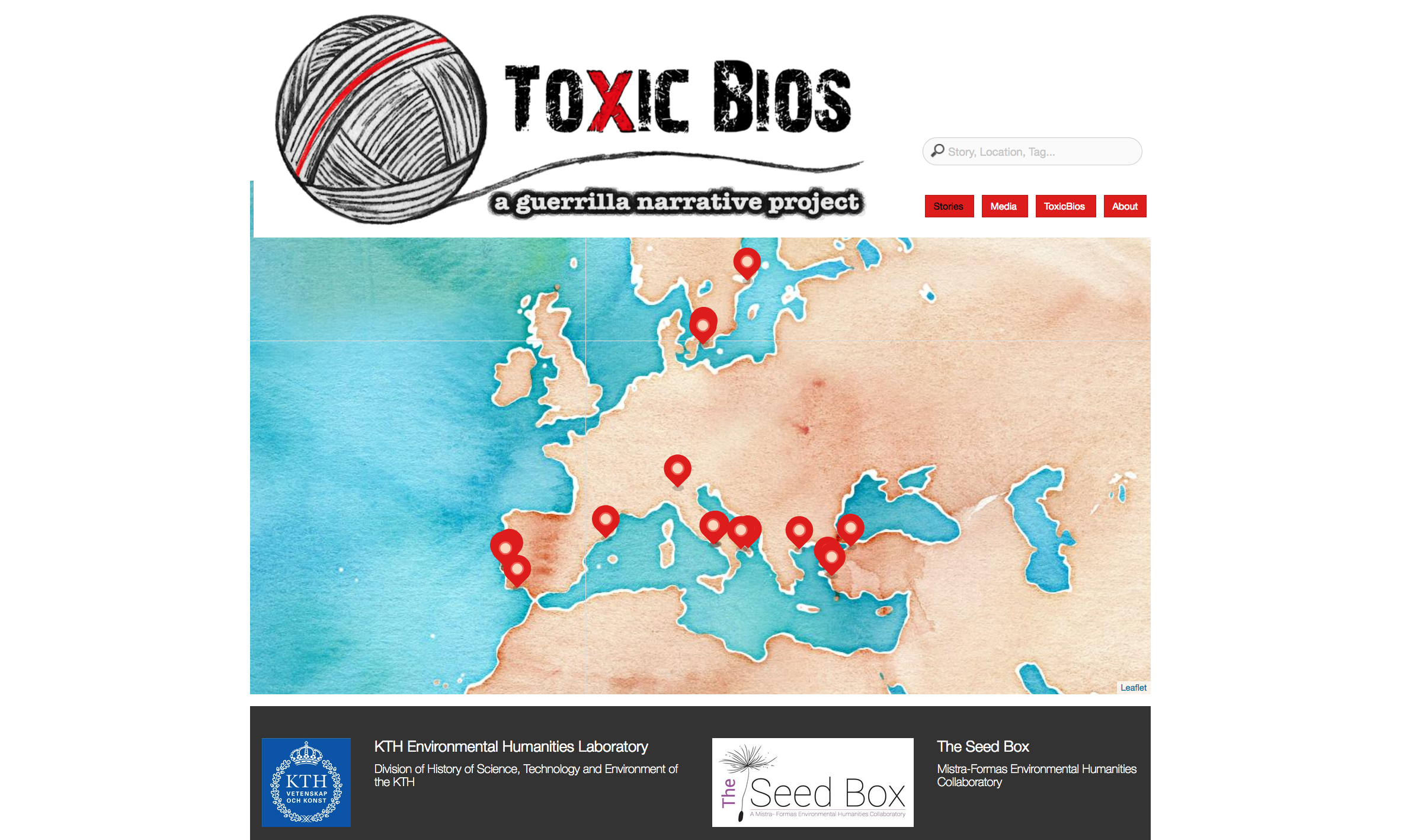 The Toxic Autobiographies will progressively be published on the website. Currently, the online platform has gathered almost seventy stories from Italy, Portugal, Greece, Turkey, and Sweden, with a few more from other countries. In order to practice the plurality of knowledge production and reproduction, allowing everyone to be author of her/his everyday life story, the platform allows the possibility to submit Toxic Autobiographies in various formats, including videos, texts, images, audio files, etc. To date, Toxic Bios has built a network of collaboration among research centers, grassroots movements, journalists, think-tanks and cultural workers. The collaboration network has worked for the dissemination of the project and the collection of stories.

The project is in development and we hope it will spread further, catching the attention and interest of those who believe stories are powerful tools for resistance. If you want to be part of Toxic Bios, check out the materials section of the website and watch the video call for action or read the short manual on how to tell your story!

Marco Armiero is an environmental historian and political ecologist. His main topics of study have been environmental conflicts, uses of natural resources, politicization of nature and landscape, and the environmental effects of mass migrations. he is the director of the KTH Environmental Humanities Laboratory at the Royal Institute of Technology, Stockholm.