Producing Humans and Natures – A Feminist Comment to Kallis and Swyngedouw 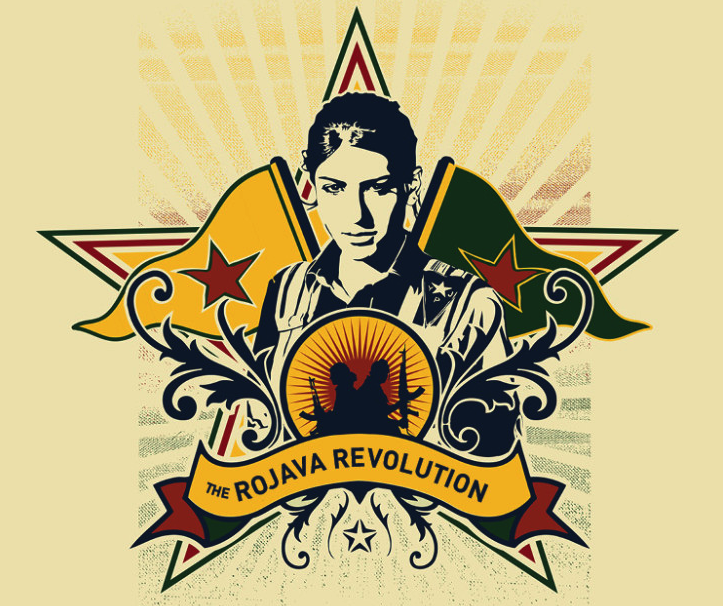 The success of the revolution in Rojava and its political practices raises the question: how do revolutionaries in their own cities relate with it? We at Rojava Solidarity NYC, would like to offer a proposal.

The success of the revolution in Rojava and its political practices have presented international revolutionaries with a unique situation, one many of us didn’t know we could hope for in our lifetimes. This opportunity has not only revitalized those fighting oppression around the world, but also raised the important question: how do revolutionaries in their own cities relate with it. We at Rojava Solidarity NYC, would like to offer a proposal.

Rojava, an autonomous region in Northern Syria, the largest revolutionary territory of the 21st century, has projected anarchist and communist ideas to the forefront of political discourse and into the pragmatic and messy reality of everyday life. The revolution’s political foundation, democratic confederalism, is an amalgamation of anarchist, communist, and feminists practices, with a focus on ecology and profoundly rooted in the Kurdish liberation struggle. Rojava has been fighting for survival against Daesh (ISIS), while simultaneously rejecting the state formation and implementing decentralized self-governance.

A false binary has been presented by academics and well-meaning revolutionaries. They argue one can either be a ‘mindless cheerleader’ or engage in what is called ‘critical solidarity.’ By this formulation, the correct way to engage with Rojava, and to some degree all revolutionary projects, is to analyze which aspects we disapprove of and vocally denounce these attributes – ones that presumably don’t line up with our ideologies.

The first problem is that the concept of ‘critical solidarity’ attempts to homogenize the region and pretend that it could be evaluated as a uniform entity. If someone is critical of ‘Rojava,’ it reinforces the framework of evaluating a people in the top-down terms of a nation-state rather than a specific commune, region, or group. This practice denies the self-defining nature of disparate groups that comprise society, denies the ground-up organizing structure of the commune, and denies the very basis of self-governance. Essentially it eats away at the very heart of the revolutionary aspects of society we are trying to affirm.

The most devastating effect is that these public denouncements have been exploited by political opponents of the revolutionary project. While Rojava is under attack by ISIS, it also faces shelling, assassination, and embargo by Turkey, and opposition from the Syrian government and the ‘Free Syrian Army.’ The reactionary forces that don’t want to see a liberated region on their borders or, for example, the self-liberation of women, are eager to use the fissures between leftists in the West to undermine support for Rojava.

Further criticism is leveled against the political bodies and militias that defend and spread the revolution. Such criticism, typically from people who are poorly informed, is in effect, unequivocally counter-revolutionary. Those critics, rather than informing themselves of the revolutionary process, learning about the groups on the ground, the militia movement, or the fluidity and openness of the project, have taken it upon themselves to undermine a fragile movement when it is most important to buttress its gains. For once, a revolutionary territory has been established with calls for expansion around the globe and for revolutionary assistance, and arm chair actors decide to fight back against it with the pen instead of strategizing about how to march forward together. These critics should be thoroughly dismissed.

Finally, and most obviously, the absence of public critique does not equate mindlessness. Quite the opposite is true. As political actors we are more mindful of the conditions that lead to decentralization, and the expansion of revolutionary gains, and we must put our assistance and advocacy to work for those with same goals as us. The most liberatory aspects of society, such as the communes and feminist organizations, are projects we must develop relationships with. As this struggle unfolds at this very moment, there is an active opportunity to aid each other’s successes.

While there are several inherent flaws with the notion of ‘critical solidarity,’ the most egregious problem is that it does not acknowledge the most important type of engagement: revolutionary solidarity.

The connections between small revolutionary groups in different cities rely on the conception that we are part of a shared struggle. We share knowledge, resources, and help propel each others’ objectives, building infrastructure and networks outside state and capitalist relations.

The same applies to a region deeply engaged in a revolution. The notion of ‘solidarity’ itself is perhaps too weak a term to express the relationship between nascent revolutionary groups and a region already practicing and experimenting with revolutionary social organization. In the most concrete terms, as friends and comrades travel to the region, even sometimes giving their lives for its success, our missions become intertwined.

It is our view that the best and most important criticality should be reserved for implementing the struggle in our neighborhoods. We look at how things work in Rojava, make connections with people who are implementing these social practices, learn from them, and evaluate how best they will play out in our own struggles. This is where criticality makes sense. How should these practices be introduced? How can they be most effective here? What practices allow for the most self-direction and participation? This is the very method of self-criticism and reflection practiced within every revolutionary organization in Rojava. In fact, if it hadn’t been so integral, it may never had pivoted over from a Marxist-Leninist struggle to an anarchist-inspired one.

A new way for relating with a decentralized society is necessary, both for appropriately acknowledging the people’s self-governance, but also for the work of propagating and reinforcing people as people, rather than subjects behind a centralized governing body. Groups, such as the women’s organization Kongreya Star or the youth networks, reach out to other such groups around the world, cutting through the unnecessary bureaucracy artificially erected by national borders. Connecting on the basis of interest, identity, and shared revolutionary intentions is an essential way for building movements across borders and undermining the hegemony of nation-states.

As the rise of the far right around the globe threatens to destabilize civil society in it’s turbulent battle for power and exclusionary violence, the more important it becomes to push forward revolutionary solutions around the globe. The more successes anti-authoritarians have on a local level, drawing more power towards the ground, the less power imperialist states can wield and the less momentum fascist tendencies will have.

Many reactionary forces would not like to see the social project in Rojava succeed. Accelerating the struggle back home helps undermine the international reach of nation-states, and the fascist forces they breed. The rise of liberatory social movements simultaneously around the world helps ensure the longevity of all. As international revolutionaries, the borders that separate our landmasses, the languages we were born into, the history of our respective areas are not unbreachable differences that separate us, but things either to be overcome, or understood, in order to push the struggle forward together.

Presently international anarchists, socialists, and communist revolutionaries are actively involved in the struggle in Rojava. They are involved at the civic level, participate in the militias, write reports for those back home, and deliver supplies. At very least there is an alliance between such actors abroad and at home. By traveling to a dangerous location, often to put their lives at risk by participating in combat, these comrades have shown their commitment to the project. When these fighters return home, they will be able to put their knowledge to use, to help further the struggles there.

What has been confirmed many times over by the individuals and groups who have traveled to Rojava, whether to report back about what is happening, to engage in the struggle, or to help with civic projects, is that the goals of international revolutionaries and those participating in this social experiment are the same. The active engagement of anti-authoritarian revolutionaries is key to the success of any revolutionary undertaking. This could mean traveling to the region to participate, or this could mean actively engaging in struggle back home, or it could simply mean spreading accurate knowledge about the practices there.

Rojava has articulated a new set of tools, proven the efficacy of feminism, and demonstrated how to achieve the highest level of humanization of people through a stateless solution and anti-capitalist practice. This work has not only made massive advances in the region, but brought these forms of organizing to a broader swathe of the population, from the Democratic Federal System of Northern Syria to regions abroad. This new paradigm for revolution has rejuvenated the struggle for smaller groups of anarchists and anti-authoritarians in cities to indigenous resistance at risk from neoliberal or capitalist enterprises, to armed guerrilla armies around the world. The longevity of this model rests on the connection with and success of such struggles around the world.

We propose revolutionary solidarity as the ideal way to engage with the social experiment in Rojava, the new revolutionary paradigm of the 21st century.