A Portrait of Human and Environmental Devastation — Stop the Invisibilization!!! Petition 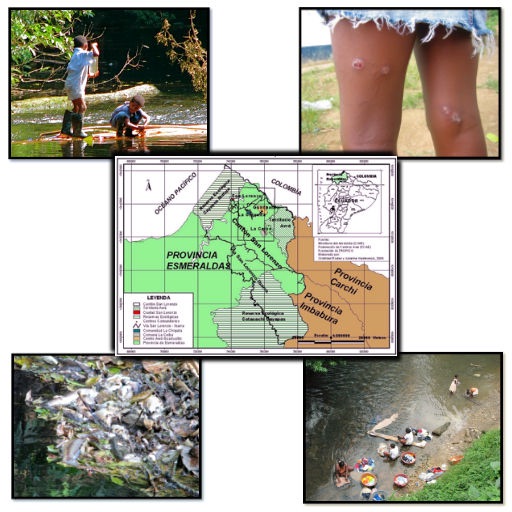 Petition in solidarity with the afro-ecuadorian ancestral community of La Chiquita and the Awá indigenous community of Guadalito versus two oil palm companies of the San Lorenzo Cantón, Esmeraldas Province, Ecuador.*

Location of the La Chiquita and Guaadalito communities and the socio-environmental effects of river pollution by oil palm companies.

In this moment the first civil court case in Ecuador and in the world in defense of Nature is in process. In this case Nature is a subject of rights. She presents her demands together with us, two ancestral communities: the Afro-Ecuadorian community of La Chiquita and the Awá Indigenous community of Guadualito. Our communities are located in the Ecuadorian-Colombian border—Canton San Lorenzo, Esmeraldas Province—located in the northwest region of the Ecuadorian coast.

Our lawsuit demands that the two oil palm companies Esteros EMA SA Palesema and Los Andes SA, who have been cultivating oil palm (Elaeis guineensis) for biofuel production in the Canton of San Lorenzo for more than fifteen years, suspend their harmful practices that have led to the following consequences: massive deforestation of the rain forest, major loss of biodiversity, excessive river pollution, and subsequently the serious deterioration of health and of the food sovereignty of our people. We request that the oil palm companies repair the damage and respect all beings that inhabit Nature: people, spiritual beings, rivers, forests, mangroves, and distinct species of trees, medicinal and food plants, mammals, amphibians, birds and invertebrates.

“Protecting the Environment, the life and lungs of Ecuador” — Awá Anti-Corruption and Pro-Territory March, 8 July 2007. Photo by J. Hazlewood.

We need as many signatures as possible in order to accomplish two things: 1) to demonstrate to the palm oil companies, the judge, and the pertinent authorities of the Ecuadorian state that the whole world is watching; and 2) to show the communities of humans and more-than-humans in the Pacific Rainforests of northwest Ecuador that they are not alone in their struggles. With your signatures you join a collective appeal to the pertinent authorities of the Ecuadorian State, that through their administration of justice the verdict constitutes a true paradigm shift in favor of the Rights of Nature, and guarantees the future of the children and grandchildren of our communities.

You can also support the communities by liking this Facebook page, where you can find updates and further information about the case of La Chiquita, Guadalito and Nature against the palm oil companies.

In Solidarity and with Hope,

Julianne A. Hazlewood, Ph.D., Researcher in the San Lorenzo Canton since 1997 and Coordinator of the Te Ha Alliance for Indigenous Knowledge, The Cultural Conservancy, San Francisco, California.