The Bio-Financialization of Irish Water: New Advances in the Neoliberalization of Vital Services 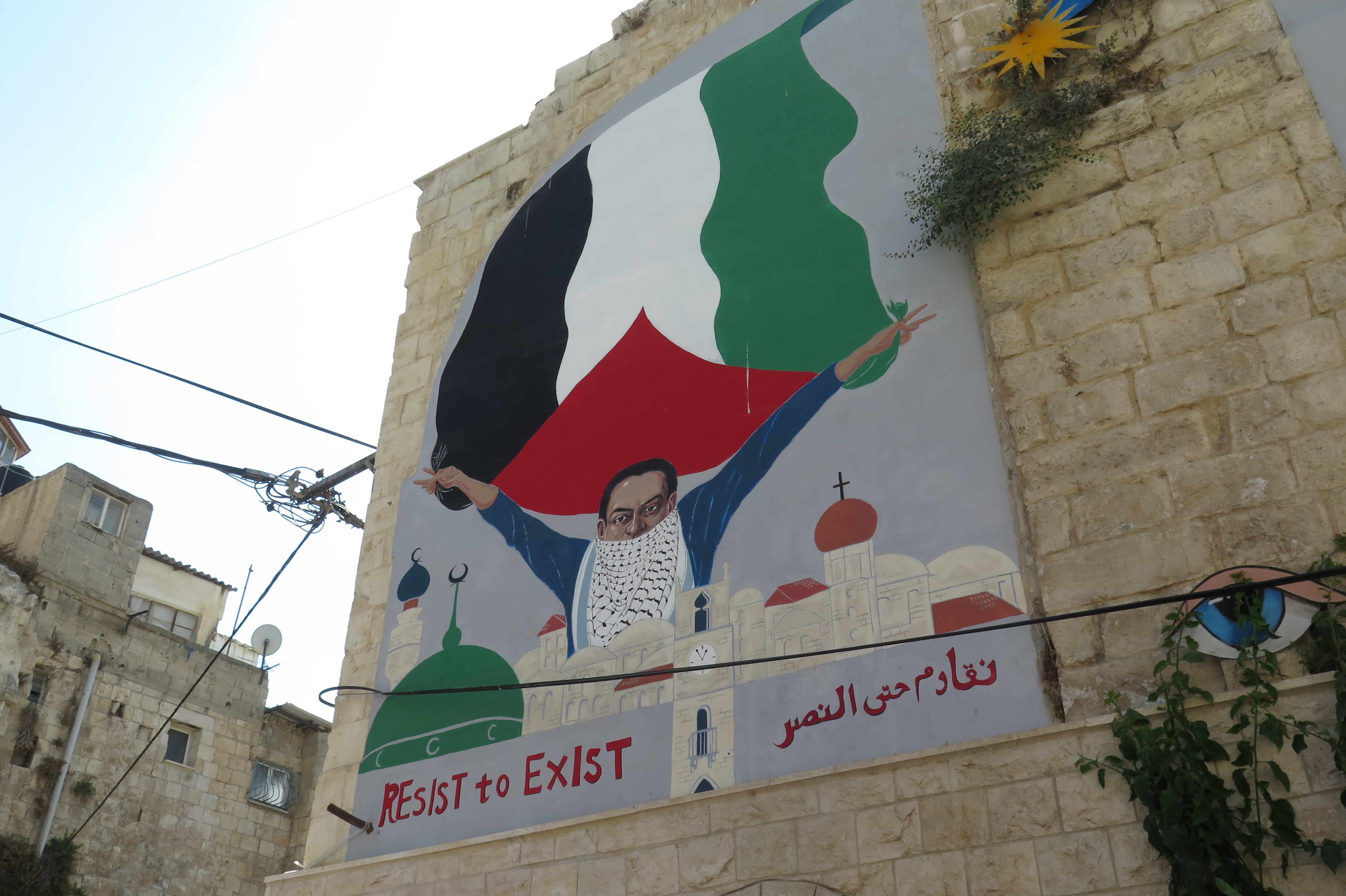 Mural in the West Bank city of Nablus. Photo by Amelie Huber.

In July 2015 a group of ENTITLE fellows travelled to Palestine to attend the International Conference of Critical Geography in Ramallah. The following piece is the first part of a series on the political ecology of life under settler colonialism in the West Bank. 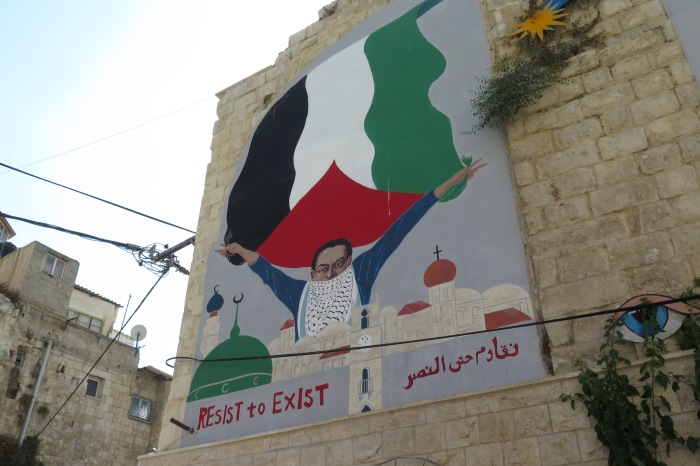 Mural in the West Bank city of Nablus. Photo by A. Huber.

The International Conference of Critical Geography, which took place from 26-30th July 2015 in Ramallah was a superbly organised get-together of critical thinkers from over 40 countries and various academic and activists backgrounds. The programme was jam-packed with interesting panel sessions, plenaries, field trips and cultural events, and provided for a thought-provoking, transformative experience. Apart from the fact that at least 14 participants were denied entry by visa authorities and Israeli border controls, it was a surprisingly smooth event. Two afternoons of the four day conference were fieldtrips to cities and villages within the West Bank and in Israel. We as ENTITLE fellows also visited the Jordan Valley with our ENTITLE partner Nader Khateeb, who works with Friends of the Earth Middle East in Bethlehem.

Overwhelmed with impressions, observations and accounts of the everyday plight of Palestinians living under occupation, we decided to publish a series of posts about the political ecology of everyday life under settler colonialism in Palestine. While this post looks at aspects of mobility, land expropriation, contamination and settler-farmer conflicts, subsequent posts will pick up other issues, including agriculture and water access, infrastructure enclosures, urban occupation, gentrification and resistance. The information reproduced here emerged from conversations with activists, academics and NGO workers based in the West Bank.

“The occupation does not recognize our right to time”

A trip to the northern West Bank started with a spot-on illustration of one of the key limitations Palestinians face in their everyday life under occupation: the restrictions on individual mobility through the construction and obstruction of roadways, on the pretext of improved security. As we were passing the settlement of Beit El, we found the road closed with a ‘flying check post’. These are concrete blocks that can be transported to erect road blockages any time anywhere, doubling or sometimes tripling the time and cost of travel for anyone with the ‘wrong’ number plate. Just like all the other Palestinian vehicles our bus had to take a 15-minute detour, just to emerge again on the same road, 100 metres ahead of the check post. In order to ensure the safety of settlers, Palestinians have to face increased traffic-related risks. As one of our tour guide told us:

“Going via the bypass road is difficult and sometimes dangerous, for the traffic and for the pedestrians. Because it was not prepared to be a main road. And with heavy traffic usually we have more accidents, and it will take us even more time.”

‘Flying check post’ near the settlement of Beit El on the outskirts of Ramallah. Photo by A. Huber.

“People in this village now live like in a jail. To leave the village there is an iron gate and sometimes soldiers close this gate, not allowing the people to leave. They would have to walk to get to wherever they want to go. A lot of women are not allowed to reach the hospital to give birth, they give birth at the checkpoint or at the iron gate and a lot of them lose their babies, and some of them die, because they are not allowed to go to the hospital. It also affects education.”

The unpredictable rhythm with which roads are closed and opened or relocated is related to the creeping expansion of settlements.[1] Unannounced housing demolitions and land confiscations for settlement expansion are a daily practice in the West Bank. As Atef Sa’d, the late journalist and leading member of the Jerusalem Legal and Human Rights Centre (JLHARC) explains, one day it is a Palestinian house or part of an entire village that is demolished, another day a tree or an orchard is cut. In this way the settlements keep growing steadily.

This ongoing process is also facilitated by fuzzy or contradictory property rights regimes. But even when Palestinians hold legal ownership documents for their land, these can be contested through military orders, claiming that the construction of the Palestinian house was illegal, irregular or runs counter security interests. As Atef Sa’d explains:

“In the village As Sawiya we represent 65 families who received demolition orders for their houses, because Israel did not issue building permits for them. While in the settlement there are 160 units established on private Palestinian land, owned by this village. And it is licensed.”

This leaves home owners and their livelihoods in a permanent state of disorientation and insecurity. At times, years may pass before a demolition order previously given is actually executed. In other instances the Israeli authorities have also carried out unannounced but only partial demolitions.

No doubt Palestinians attempt to resist the confiscation of their land and the demolition of their properties, including through litigation. Sometimes with success. But it is uncertain how effective this is in the long term, given the determination with which some settlers seek to advance the Zionist project, and the extent to which their pursuit is backed by the Israeli authorities.

In the settlement of ‘Beit El’, for example, we become witness to the demolition of two Israeli buildings. Established on the outskirts of Ramallah, the Palestinian private land on which Beit El is located was seized initially by the army for military purposes. Many buildings were built without permits, and are therefore illegal. But this is not necessarily an obstacle for construction. There is now a draft law in place to legalize such land confiscations retroactively, we are told. Alternatively, as in the case of Beit El, the demolition notice issued by the Israeli government for two buildings under fierce opposition of pro-settler parties is followed with a concession for hundreds more. 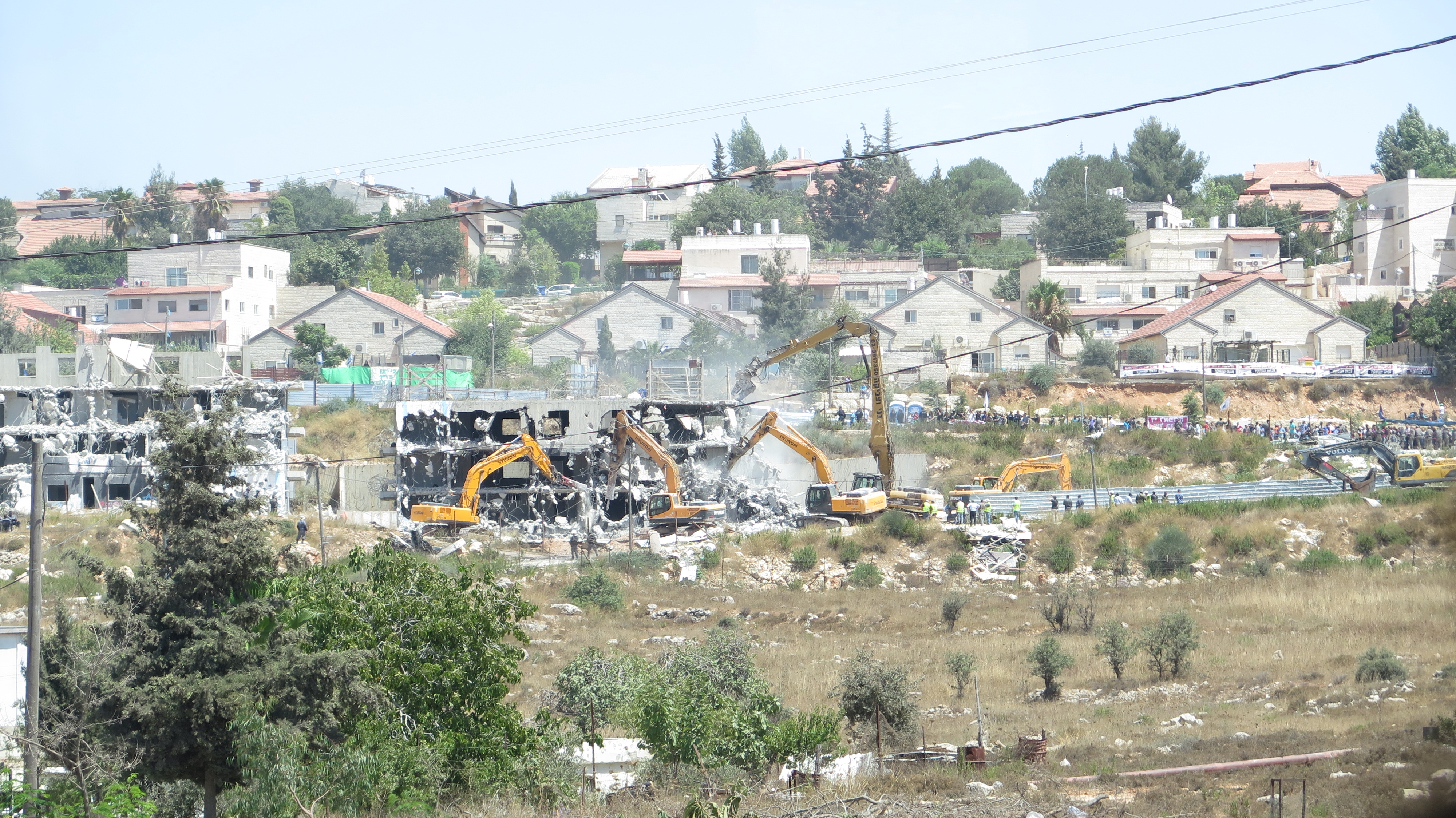 Wadi Qana and the demise of Palestinian farming under settler colonialism

The example of Wadi Qana may be one of the most striking examples of Palestinian suffering due to land confiscation and settler colonialism. Wadi Qana is a river valley southwest of the strategic historic city of Nablus, which used to be particularly fertile for cultivation. Seventeen permanent springs supply water in an otherwise arid and rocky landscape. Most of the land in the valley is owned by around 50 families from the Palestinian village of Deir Istiya, who used to depend on the land and its springs for cultivation of vegetables and citrus, and for rearing cattle.

In 1979 the Israeli military attempted to declare Wadi Qana a closed military zone, an order which was later repealed due to resistance by the local villagers. Nevertheless, Wadi Qana was enclosed by settlements. The first, Qarne Shomron, was established in 1976, and has been joined by nine other settlements and settlement outposts. Together with the newly built road network they surround Wadi Qana and practically cut off the farmers’ direct access to their land. The enclosure creates other conflicts too.

In 1983, an area of 1,400 ha land in Wadi Qana was declared a nature reserve. Despite this declaration the settlements and outposts discharge their wastewater into the valley, polluting the landscape, springs and streams. The first wastewater treatment facility was installed in 1992, but remained defective for most of the time. The sewage would percolate into the valley and damage the fields and ecosystem below, a condition which persists to date. Similar problems with sewage treatment and evacuation are reported elsewhere in the West Bank. In Ariel, the largest hilltop settlement of the West Bank, the sewage networks tend to overflow in the winter, leading to flooding of fields and homes in the village of Marda below. In industrial settlements the uncontrolled discharge of sewage also includes chemical waste.

Solutions to the sewage problem through the establishment of wastewater treatment plants have been discussed in the Joint Water Committee, a body composed of Israeli and Palestinian water experts, who decide on water infrastructure plans in the West Bank. Money for such facilities has also been pledged from international donors. Yet, the problem appears to be foremost a political one. Since Israel has the veto power to refuse the building permits, it insists to have also the settlements connected to the water treatment infrastructure. The Palestinian Authority refuses this deal.

Another conflict affecting farming livelihoods in Wadi Qana has to do with settler encroachment on land and property in the valley. Farmers report of houses, animal shelters, wells and farming equipment being damaged. A 77 year-old farmer was recently attacked. Due to the expansion of settlements, grazing land for cattle has been greatly reduced, leading to an overall decline in the animal population. As one farmer explains:

“In the 1970s and 1980s our village was known as the village of the white oil, because we were the main producers of milk and cheese. In that time at least 40.000 sheep and goats were in our village. But now we’re talking about hundreds. This is because they closed the lands by settlements and they killed by gun some of our animals near the settlements.”

The roads that cut across the valley make it increasingly difficult and dangerous for farmers to move with their cattle and crops between farm land and village. Cattle deaths and human casualties due to road accidents are not unusual.

The recent introduction of wild pigs has caused further losses in agricultural productivity, as farmers have no means to protect their land and crops from the animals. Many farmers no longer cultivate their land. The production of wheat has been almost completely decimated, taking away an important source of income. Tree nurseries for figs or almonds are also at risk. To top it all off, the valley does not receive any water or electricity supply, making life there practically impossible. Today only three families live in Wadi Qana with their animals. 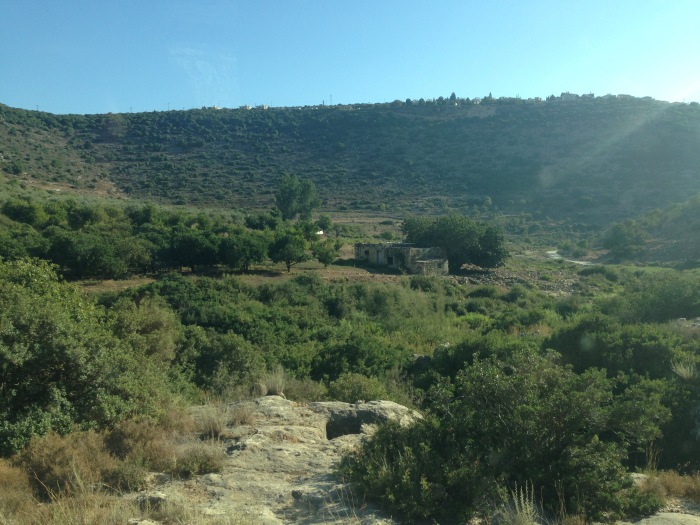 The restrictions on and enclosures of mobility, land and agricultural livelihoods illustrated above reveal how settler colonialism combines direct violence with the occupation of territory, infrastructure, resources and people. Life under settler colonialism thus becomes difficult and at times impossible for Palestinians.
The political objectives of this kind of occupation appear obvious when looked at from a geopolitical perspective. The Zionist settlement project, which aims at the creation of a Greater Israel is premised on the impossibility of a continuous Palestinian state. Nowhere is this more visible than in the Salfit area, where more than 50% of the land has been confiscated already, or around Jerusalem. In both areas settlements are expanding to form a homogenous occupied area that extends to the Jordan Valley and the Dead Sea respectively, thereby separating the Northern and the Southern West Bank.

[1] The first series of about 130 settlements and 99 unauthorised outposts in the West Bank were built after the Six Day War in 1967, when Israel captured the West Bank and other territories. A movement of religious Zionists started venturing into the occupied territories and started construction, inspired by an ideology that urged them to ‘prepare the Holy Land’ and return it to Israel for the arrival of the Messiah. Approximately 700,000 Israelis subscribe to this ideology today, less than 10% of Israel’s population. The construction and expansion of settlements implies the expropriation of Palestinians from their homes, villages and farmland.

*This is the first part of a series on experiences of several ENTITLE fellows during the International Conference of Critical Geography in Palestine. Subsequent contributions can be found here and here.