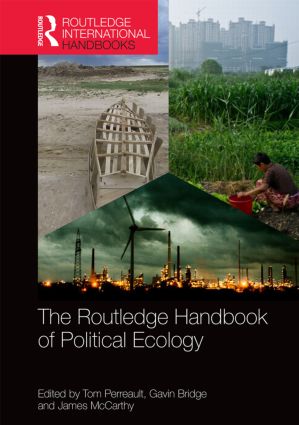 An ENTITLE public event in Istanbul presented what is perhaps the most ambitious essay collection to date on political ecology*.

The new Routledge Handbook of Political Ecology (HoPE), edited by Tom Perreault, Gavin Bridge and James McCarthy, has just been published. During a Summer School which took place at Boğaziçi University Istanbul last 15-20 June, the ENTITLE Network organised a public launch of the Handbook in an event on New trends and trajectories in Political Ecology.

HoPE was introduced by one of its editors, Gavin Bridge, who explained how he was convinced to take part in the editorial team thanks to the ambitiousness and originality of the project—despite initial scepticism regarding the need for ‘yet another political ecology handbook’. His introductory talk was also an opportunity for reflecting on political ecology as a field of inquiry in the present conjuncture.

For Bridge, “HoPE understands and approaches political ecology as a field that combines academic inquiry and political practice”, paying attention to “the knowledge claims and practical strategies advanced by people, many of whom are poor, subjected to the rationalities of resource management, environmental projects or climate change to which they do not consent.”

Political ecology is understood as an epistemological project challenging comfortable and simplistic ‘truths’ about relations between society and environment.  As the editors state in the Handbook’s concluding chapter, it is a “theoretical and political lens through which to understand, challenge and structure further inquiry into nature-society relations in the contemporary world” (p. 621).

The field of political ecology has grown and diversified over time. Today, for Bridge, “it is a capacious intellectual framework—a riotously diverse field in which the meaning of political ecology has expanded rapidly.” Its geographical and institutional development has, however, been uneven. “Political Ecology has become institutionalised in North America in a way that it has not in Europe. There are growing international links and cross-fertilisation—of which, for instance, the ENTITLE project is part—alongside the emergence of distinctive regional traditions of political ecology”.

HoPE includes perspectives from outside the Anglo-American tradition of political ecology, such as a chapter by Denis Gautier and Christian Kull on ‘French research traditions on peasant agricultural systems’ (chapter 5) and one by Mexican scholar Enrique Leff on viewing political ecology ‘from the South’ (chapter 4).

The Handbook makes no claims to be comprehensive or definitive. Its chapters are focused assessments of strands and conversations within the field, organised around analytical concepts, bodies of theory and problems of political practice. “The (increasing) diversity of political ecology raises a question about where its coherence lies. Our answer is that political ecology is not defined by a research topic or a particular scalar focus, but by a set of commitments.”

As the Handbook’s introductory essay explains, these are: a) a theoretical commitment to social theory and post-positivist approaches, in which  knowledge about nature is inseparable from social relations of power; b) a methodological commitment to in-depth qualitative research and direct observation (although often in collaboration with/with contributions from quantitative approaches);  and c) a normative-political commitment to justice and structural political change; that is, not just to explain, but to construct an alternative understanding with an orientation towards justice.

Paul Robbins captures this well in his discussion of political ecology as ‘a trickster science’ (chapter 6), “[whose] chief characteristic in this regard is its simultaneous ability to advance rigorous empirical assessment of socio-environmental conditions and change, freely adopting the methods and conceptual apparatus of related research traditions, while constantly critiquing and undermining the projects of these other fields (p. 89).”

The event continued with a presentation by Stefania Barca, author (with Gavin Bridge) of a chapter on ‘Industrialization and environmental change’ (chapter 28); and with a talk by Erik Swyngedouw, author of the last chapter (47) on ‘Urbanization and environmental futures’. These presentations, and the debate that followed, gave the audience a taste of what is perhaps the most ambitious essay collection to date on political ecology.

*Many thanks to Gavin Bridge for help in the preparation of this post.