The revolution of the butt-naked in Pedro Costa's 'Cavalo Dinheiro' 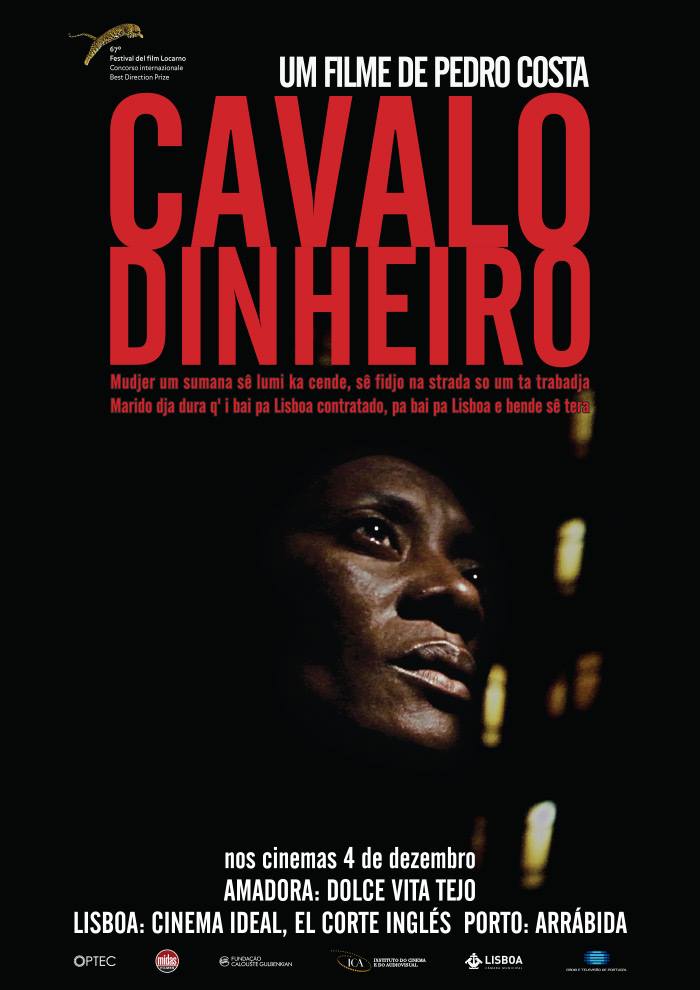 Costa’s latest film explores the unpleasant space of nothingness. Is there anything left of the revolutionary left?

Pedro Costa’s latest work, Cavalo Dinheiro, is an artistic film full of photographic images and theatrical gestures. Often, the slowness and quietness of the camera is almost unbearable. Academics like the French philosopher Jacques Rancière admire Costa’s films. Yet, some might feel that these are not times to be abstract and elusive—or perhaps elitist—about the revolution. For me, the film is graphic enough to bring about memories. Should we do more emotional work to depict the ‘proletarians’? Who are they?

The film introduces us to the various characters of ‘workers’ located either in a mental hospital—treating what they described as an illness caused by the ‘humidity of their houses’—or as they image travelling in-between a native home in Cape Verde, a Portuguese ex-colony, and a migrant home in Lisbon.

The camera often stops on the faces of characters, forcing us to look into their eyes or to see the continuous trembling of their hands. In their (perhaps imaginary) travelling, they repeatedly refer to the factories and the machines that gave meaning to their lives. One entire scene takes us directly to the site of the ruined factories, where the workers return to demand their wages.

We learn about the main character, Ventura, often walking around in his underwear. Suddenly I am remembered of my father, a carpenter, who always joked with bitterness about his status: ‘ne-au lasat in curu’gol’ (in Romanian) which literally means ‘they left us butt-naked’, ‘they robbed us of everything, even our clothes’.

This bitterness is not about ‘status injury’ or lack of respect for the dignity of workers who have built ‘Houses of the People’ while they themselves were living in ‘humidity’. It is about the meaninglessness of the status (of worker) itself, his/her invisibility in either regimes of “Peoples’ Democratic Republics” or liberal democracies of capitalism.

Rancière teaches us that any revolutionary identity has to be confronted with the fact that such an identity is already a product of a denial in a process of naming people for population management. “Policy is about ‘right’ names, names that pin people down to their place and work”. Slaves, workers, women or peasants—these names are not some intrinsic attributes of some selves. Therefore, he argues, the proletariat is the generic name for the dissolution of all classes; it is the concept of those who are ‘nothing’, the ‘butt-naked’.

Many of the film’s conversations are about the sufferings of loss—loss of jobs, loss of family, and loss of mind. ‘I did not even know who I was any more’, says Vitalina, another character. For her, the loss of her husband and the impossibility to get back in time for his funeral was causing a psychological trauma. Her eyes were continuously staring in a lost gaze. Whose ghosts are we watching here, those of the ex-colony Cape Verde or that of the industrial Lisbon?

The film is not made to give us clear answers. It is precisely this incoherence that matters. For sure, the mental and emotional labyrinth we are invited to get lost in throughout the film is not a comfortable place. It is not a story that seeks to inspire pity about poverty. In fact, this lacuna itself may provoke anger to some who are thinking that depressed people cannot make a revolution.

Even in the revolutionary enthusiasm for changing the conditions of exploitation, some people might be irritated by the ugliness of a worker’s depression. After all, capitalism teaches us that misery is causa sui, abject and ugly. We might rather not feel the trauma of the butt-naked ‘nobody’—the fragmented, lost, and contradictory subject of revolutions.

One of the final scenes traps Ventura in the elevator of the sanatorium together with a statue of a soldier. We witness an imaginary conversation between these characters and we hear the soldier demanding for Ventura to rise against fascism. But Ventura replies: ‘I do not work, I cannot work any more; I am retired’. His retirement has, therefore, more meanings, letting us dwell in ambiguity about the ‘employer’ (be it the army or the factory). This is the unpleasant space of nothingness: is there anything left of the revolutionary left?

Before celebrating collectivities of workers or ecologists, perhaps we could also remember that when we are ‘nobody’ (butt-naked workers), we have nothing to lose any more. Embracing the nakedness/emptiness of being ‘nobody’ may help us summon the courage to die (perhaps even for a revolution). The characters of the film whispered in the hospital room ‘we are together in this’.