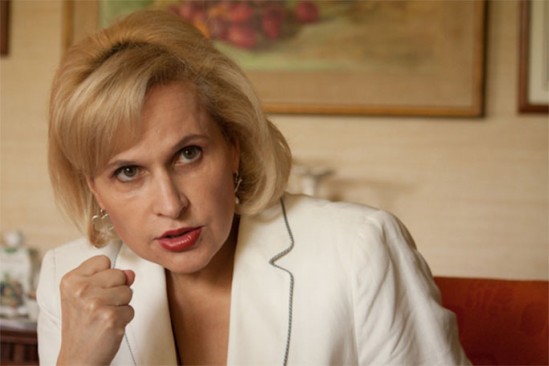 The Colombian attorney Sandra Morelli, a woman with a strong personality, is a member of the Colombian establishment. Since September 2014, she doesn’t know whether she’s living a sabbatical or a political exile in Rome.

Sandra Morelli is a habitual protagonist in the Colombian press after having been the state Comptroller for over four years (2010-2014), appointed with the approval of the Congress and the President.

A specialist in constitutional and administrative law, trained in Bogotá and in Bologna, as a comptroller she showed how much officials in this same position in other Latin American countries could or couldn’t do. The comptroller should monitor whether taxes are spent according to the budget and if all dues are collected. This is an important issue in Colombia with an economy that depends in part on the mining exports of multinational companies.

While President Santos promoted the so-called “mining locomotive“, the comptroller Sandra Morelli fulfilled her obligation to investigate the contracts and accounts of mining companies. She surrounded herself with a group of experts in hydrogeology, law, economics, public health and environmental chemistry who had been removed from official public policy.

The Comptroller’s office is an important institution, with thousands of officials. Sandra Morelli activated it and tackled corruption, particularly in the field of public health. She found out that generic drugs were sold that were just like flour and didn’t cure anyone. This earned her the enmity of the lawyer of the company Saludcoop, who would then become the state attorney general.

Her work, along with her support for investigation into the impacts of large-scale mining and its huge environmental liabilities, was recognised by Senator Jorge Enrique Robledo, of the Alternative Democratic Pole. Robledo recalled that in 2010 he hadn’t supported the election of Morelli to the Comptroller’s office, but wanted to use the opportunity of her departure to highlight her contribution to cases such as EPSs and Saludcoop—in which 1.4 billion pesos were recovered for the treasury—and for the monitoring of cases of large-scale mining—for which the studies and documents produced are excellent references. And indeed they are.

The work of Sandra Morelli didn’t win only praise. Her departure was troubled, because the attorney general filed criminal charges for embezzlement in favour of third parties, claiming that the lease of the new headquarters of the Comptroller’s office, signed in 2010, did not meet legal requirements.

This is obviously revenge, which adds to that of the mining sector. Several officials of the Comptroller’s office are being harried. Faced with these attacks, the comptroller mobilised her contacts in Italy and now lives there, waiting for this artificial storm to abate while she undertakes a period of teaching and consulting. During some time she feared being imprisoned, and that her (fatherless) 11-year-old son would be placed in a state institution. So they moved to Rome.

A good wish for 2015 is for Sandra Morelli to write or dictate a book and even a documentary script to help law students and environmentalists in Colombia and other countries, showing them what a determined comptroller can achieve.

A book or script could explain the technical details and anecdotes of her actions to rein in companies and state officials in the cases of Cerro Matoso, a nickel mining site whose administrative concession is faulty because it entailed the expulsion of local populations; of Drummond, for damaging the environment and public health in the port of Santa Marta and for its horrendous coal operations in El César; of Billiton and the dispossession of the Wayúu territory in La Guajira and its attempt to divert the Rancheria River; of Anglo Gold Ashanti in La Colosa, in Tolima, explaining the reasons for the legal validity of the referendum of the town of Piedras, and so on.

Sandra Morelli sponsored the publication of four books on mining in Colombia. At other times these texts published by the Comptroller’s office would have already been destroyed, but there was time to upload them on the web and there they are to be studied. It is astonishing that, despite this evidence, the “mining locomotive” continues to be praised.

The economist Luis Jorge Garay has been in charge of editing these four excellent reports. The fourth volume includes data on water pollution data in El César obtained by the geologist Robert Moran and an excellent inventory and study of environmental conflicts in Colombia by the ecological economist Mario A. Pérez Rincón. You can access them here [in Spanish].

* Joan Martínez Alier is a Catalan ecological economist based at the Autonomous University of Barcelona and a member of the ENTITLE network. He is the author of The environmentalism of the poor: A study of ecological conflicts and valuation (Edward Elgar Publishing, 2002). This article is reproduced with permission from the Mexican newspaper La Jornada.