Between drought and monsoon: the embodied hardship of seasonal work in Maharashtra’s sugar cane plantations

How can we use blockchain for an eco-socialist transformation?

Blockchain and Karl Marx: Question is how to use blockchain for an ecosocialist transformation. 2017. Image obtained from Medium.com.

There is a lot of excitement about blockchain among technology professionals. It is also celebrated by many for bringing more transparency to supply chains and promoting decentralized governance. However, can blockchain do more than this? Can this technology potentially open the door for a complete eco-socialist transformation? Yes, but how? Time for action and discussion.

A day barely goes by when we do not hear the word “blockchain”. Particularly last year, global interest in blockchain technology, as well as in cryptocurrencies and artificial intelligence, has permeated many places. If you also keep hearing blockchain without knowing what really it is, it is a distributed and decentralized public ledger. In other words, it is public information (the block) stored in a public database (as a “chain”). In a simple way, blockchain is pieces of digital information registered and viewed by everyone.

Although some are clearly interested in these new technologies for their potential for opening new markets and bringing new profit opportunities, there are also those who research the potential of blockchain for social impact. Although in most critical corners, it is well recognized that “technology will not save us,” we need to go beyond this discourse and identify how we can make use of these new technologies for an eco-socialist transformation. Since humanity has already reached a level where mass production can be achieved at a speedy manner with the current means of production, new technologies can open the door for a new organization of the relations of production.  It is true that neither problems regarding environmentalism nor social welfare injustices can be reduced to technological fixes; however, there might be ways in which new technologies can be used to foster equity and justice in social and environmental issues. This is why, as social and political scientists, we need to take these advances more seriously and study their potential to shape the future as we – many – want it.

Much of the early attention given to these technologies was on their potential for financial inclusion of the poor in the early 2010s. Due to transaction costs and other entry barriers, around 2 billion people around the world currently do not have a bank account. Yet, if we aim for a more egalitarian eco-socialist transformation, we need to work also on ways in which blockchain can be used for other social purposes. Current studies celebrate blockchain technology for promoting transparency, building trust and reputation, and supporting decentralization. For example, blockchain might be used for a self-sovereign identity: given that millions of people across the globe are affected by human trafficking in the form of sex slavery or forced labour, their passports being either withheld or stolen from them, blockchain might offer a partial solution to this problem, by giving individuals to register and hold their own identities digitally. Secondly, blockchain can be used for carbon emissions trading as well as tracking climate mitigation, adaptation, and finance efforts. For instance, in January 2018, the United Nations announced the formation of the Climate Chain Coalition to advance such efforts. Another example where blockchain is used with increasing frequency is in tracing supply chains: by making a particular good trackable from producer until it reaches its final consumer, blockchain decreases the need for middlemen and increases transparency. It is already used with these purposes in the jewelry industry and in industries tackling child labor.

In my opinion, this last example is exactly where the biggest power and potential of these technologies lie. If we manage to directly tie the consumer with the producer, and provide the consumer with the entire supply chain information, then, through blockchain technology, we can actually abolish the concept of money (including bitcoin, which is digital money) and eventually the concept of “private property.” By direct tracking and linking of what is needed by consumers and what is produced by producers (as well as the entire supply chain), we might be able to open a new chapter in value creation. Thanks to improvements in digital technologies, we already have substantial information about what is consumed by whom, when, and in what quantity. Then, production can be arranged according to what people want on the ground without the limitation of monetary valuation. Currently, the information about what people want is already being used – but by companies and for advertisement and profit-making purposes, which manipulates the demand. Imagine what would happen if this information were made transparent and accessible to the public. Then, we can even abolish the concept of private property because when one can get whatever (s)he wants anytime, then (s)he would not need to “own” it anyway. Certainly, there would be limitations, but not monetary limitations. Imagine you can get as many red shoes as you want any time. Would you rush to the shop and get them all today? Probably not, because you would know you can get another one tomorrow and you would not have enough space to store them at home. But if everyone still continues wanting several red shoes despite space limitations, then it would really mean that people want red shoes – without being manipulated by profit-seeking advertising – then we would focus on finding a solution to the “storing the red shoes” problem for everyone. 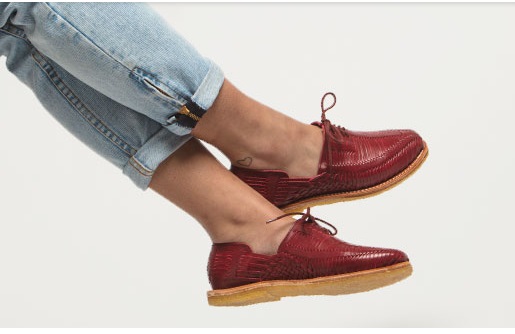 Using blockchain for tying production and consumption information transparently so that everybody can get the shoe they like. 2018. Photo obtained from Blogs.oracle.com.

Many liberals are fearful of this “information-collection” for data privacy reasons. However, if we are able to tie consumption data with production data, and make it transparent through blockchain technology, it would be revolutionary. There is already significant planning in the economy undertaken by companies and based on the market principles of profit maximization, cost reduction, and market share enlargement. If we can tie production and consumption through blockchain, eventually, we would also modify these core principles. We just need a bit more critical and creative thinking about it. And of course, what is needed is to convince the immense lobby power behind the capitalist system about what this system is also detrimental for their own interest and well-being.

No matter how imaginary it might sound right now, the picture above presents a considerate scenario for the future. Of course, this possibility requires further elaboration by many more social and political scientists and Information Technology professionals. Yet, the purpose of this argument is to bring attention to the potential of new technologies to help us design a future as we want it. We, as social scientists, should move beyond both the “technology vs. ethics” or “technology will not save us” debates. Indeed, technology might open the door for a more egalitarian and organized future. The source of the problem is not the technological advances, but rather the power relations behind the scenes.

Take your computer. Imagine that you were able to learn where all of its components are mined and manufactured. Imagine you were able to track all of its components’ transportation and learn about the amount of environmental degradation and carbon emissions that they cause. Imagine you were able to obtain information about how much each worker had earned during its production, and compare that information with the earnings of the shareholders of the computer retail company. How about also being able to see the photos and videos of the factories and learn about their working conditions (including paternity/maternity leave, holiday possibilities, social security conditions, retirement options, etc…). Is it too much information? Would you feel comfortable knowing that your shoes were produced by people who can take no holidays during the year, and can see a happy retired life only in their dreams? Perhaps this is information that we already know, but feel that the situation it exposes is too distant for us to care about. So, if blockchain technology were to illustrate everything and visualize it through pictures, networks, and videos, we might feel close enough to understand that it is, indeed, the reality.

In such a system, “planning” of production can be local production units and professionals – which are always tied to all other planning units in the world through blockchain. Since information and decisions remain transparent and open to the public (everyone), objections to decisions would also be transparent. Objections would be discussed continuously in a dynamic manner through blockchain technology and perhaps also by political councils at very small local levels. This would facilitate and certainly democratize our life all.

How about the “eco” part of the eco-socialist transformation? Unfortunately, blockchain technology is currently a power-hungry force. It requires a significant amount of energy to run. Hence, unless the increase in the use of this technology is not accompanied by a transition to renewable energy, this technology involves certain risks too, such as accelerating global warming. As such, it is really the right time for more thinking and research about the use of blockchain for social impact!