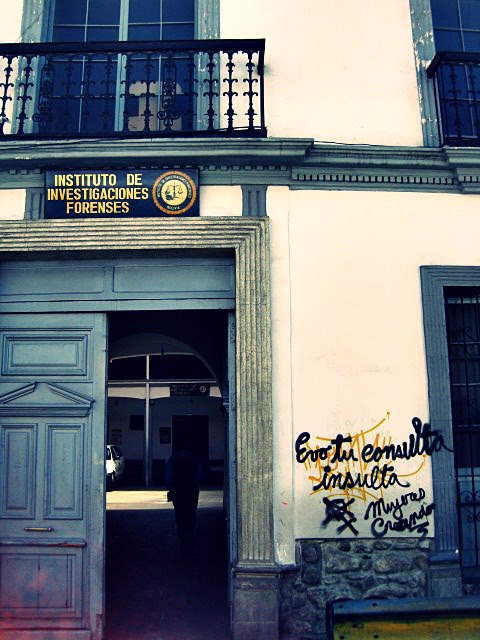 By Anna Kaijser*
Capitalist ‘culture of death’ vs. an alternative ‘culture of life’? Recent environmental politics in Bolivia manifest contradictory tendencies and the entanglement of environmental matters with issues of territory, natural resources and national identity.

“Evo, your consultation is insulting”, slogan written by the feminist network “Mujeres Creando” which criticizes the consultation in TIPNIS, La Paz, 2012. Photo by Anna Kaijser.

MAS and the politics for living well

In December 2009, at the Copenhagen Climate Change Conference – December 2009 (COP15) the Bolivian president Evo Morales claimed that climate change is driven by a Western, capitalist ‘culture of death’. He proposed an alternative ‘culture of life’ resting upon Andean indigenous worldviews. Less than two years later, in August 2011, in a protest march from the Bolivian Amazon to La Paz over 1700 participants accused Morales of promoting colonial and commercial interests. In this article, I will discuss recent environmental politics in Bolivia starting from these two examples. I will point to contradictory tendencies and the entanglement of environmental matters with issues of territory, natural resources and national identity.

Morales belongs to Aymara, one of the largest indigenous groups in Bolivia, and is often described as the country’s first indigenous president. When Morales and his party MAS (Movimiento al Socialismo) took office in 2006, they launched their project el proceso de cambio, ‘the process of change’, signaling a break with neoliberal and colonial orders that aimed to give a central position to indigenous cosmovisiones (worldviews) in government policy. In 2009, a new constitution was approved, offering extended recognition and rights for indigenous communities.

Yet, ‘indigenous’ is not a stable category. In 2001, 62% of Bolivians stated that they belong to one of 36 recognized indigenous groups; in 2012, this number had decreased to 41%. Given the central but fluid status of indigeneity, many different actors may claim to represent indigenous interests, which has become evident in environmental politics.

During the first years of the MAS regime, environmental policy took form around two key Andean indigenous concepts: Pachamama (Mother Earth) and vivir bien, which entails an ambition to ‘live well’, in harmony with the environment (read more here). In Bolivian political discourse, vivir bien is juxtaposed against a Western capitalist model labeled vivir mejor, to ‘live better’, in constantly increased material wellbeing. Vivir bien is written in the 2009 constitution. A law granting the rights of Mother Earth was approved in 2012, and in 2013 a state authority for Mother Earth was established.

MAS initially took a radical, anti-capitalist position in international forums, notably in the climate negotiations in Copenhagen, 2009, and Cancun, 2010. The Bolivian delegation’s proposals were ignored in the official negotiations, but attracted positive attention from international climate justice movements. In 2010, the MAS government arranged an alternative forum, the World People’s Conference on Climate Change and the Rights of Mother Earth, which was held in Cochabamba and gathered around 30,000 participants from all over the world. Seventeen parallel theme groups put together a ‘People’s Agreement’. However, discussions of domestic matters were banned from the event site. Outside, an alternative working group, Mesa 18, was formed, focusing on the tensions between the framing of the conference and MAS’ actions within Bolivia.

Resource nationalism and the TIPNIS conflict

The Mesa 18 was an indicator of the tensions that were arising in Bolivian environmental politics. Bolivian intellectuals and activists pointed to contradicting tendencies within MAS’ project: on one hand, the radical environmentalist stance, and, on the other, increased natural resource dependency. The government’s approach relies on natural resources as the key to development and sovereignty. MAS has promoted extended resource extraction and initiated infrastructure projects to facilitate this.

The environmental-political tensions became evident in the controversy around the plans to construct a highway linking the cities of Cochabamba and Trinidad. The road – part of the large infrastructural network IIRSA – is projected to pass through TIPNIS, a national park and recognized indigenous territory. The highway plans met fierce resistance. The opponents pointed to the expected negative impacts of the highway, and demanded a consultation with local communities, as prescribed in the 2009 constitution and in the ILO Convention 169, which Bolivia had signed. In defense of the road, the government proclaimed that it would improve transport and communication and serve the common good. A consultation was held in 2012, concluding that 80% of the communities approved of the highway. These results, and the entire consultation process, were questioned. The still unresolved highway conflict has turned into a struggle over political legitimacy, territorial rights, formal and informal economic interests, and national identity.

The Amazon lowlands, where TIPNIS is located, have a long history of internal colonization by highlanders from Aymara and Quechua communities. This has continued under the Morales regime and incited territorial conflicts between settlers and lowland indigenous communities (read more). Many settlers have taken up coca farming. Natural resource interests in the area also include oil, gas and large-scale agriculture. A recently passed law facilitates extraction of oil and gas in national parks. Government officials continue to refer to vivir bien as a guiding principle: here, it is taken to entail extraction of natural resources for development and the public good. Vivir bien has thus over time been invoked with shifting purposes by the same government.

Tiwanaku, a highland archeological site where an Aymara ceremony was held for Evo Morales as he became president. 2012. Photo by Anna Kaijser.

The ecological indigenous as political figure

The TIPNIS conflict brought co-articulations between environmental concerns and indigenous rights to the fore, and resonated with a popular trope in international environmental discourse: the notion of indigenous people as inherently ecological. The ‘ecological indigenous’ figure has great symbolic power, and mobilizing this position is often one of few possibilities for movements to gain recognition for their struggles.

While invoking the ecological indigenous can be an effective strategy to voice resistance, it may also reproduce generalized assumptions about indigenous people, and conceal differences within this very broad category. Environmental and resource conflicts have largely been framed around indigeneity, but they also play out through other power dimensions, such as gender and class. In Bolivia, with a large indigenous population and a government that officially promotes indigenous rights, access to indigeneity has come to entail political legitimacy. In the TIPNIS conflict, several actors mobilized the image of the ecological indigenous to raise different claims.

The impossible necessity of utopias

The story of great economic forces threatening local environments and communities is familiar to anyone with an interest in political ecology. The Bolivian example presented here may come across as yet another chapter in this narrative. However, engagement with particular contexts reveals a more complex story.

It is imperative to stress that the MAS government, like any powerful actor, needs to be held accountable for its actions. MAS may promote a radical project, but for many Bolivians their proceso de cambio means continued marginalization. The criticism regarding MAS’ failure to comply with its commitments is valid: politics under Morales have largely served the persistence of internal colonial relations and commercial interests, and the government has taken steps to demobilize critical forces.

Yet, it is difficult to realize utopian visions within a global economic system that aims for endless expansion. Environmental destruction and climate change are globally recognized concerns, but the responses are stubbornly insufficient. The approaches that dominate international agendas privilege market mechanisms and technical fixes rather than systemic changes. While the Morales government has not received much formal recognition for its proposals in international forums, it has made an impact through its insistence on advocating for alternatives.

The notion of vivir bien and the legal recognition of the rights of Mother Earth are endorsed among environmentalists far beyond the Bolivian borders. They indicate a slight shift in what is thinkable within environmental politics – a shift in which Bolivian politicians, intellectuals and activists have played important roles. The government’s utopian green rhetoric opened up spaces for thinking human-environmental relations in ways that contradict the mainstream. Popular movements have acted in dialogue with or resistance to MAS, formed alliances and articulated their own mobilizing utopias.

Recent environmental politics in Bolivia has thus been an arena for violent reinforcement of power relations, but also for formation of new critical and creative coalitions and expressions of solidarity: something that should inspire environmental and social justice movements in other parts of the world.

*Anna Kaijser is a postdoctoral researcher at the Department for Thematic Studies: Environmental Change, Linköping University. She has a background in anthropology and gender studies, and works with intersectional and postcolonial feminist theory. For her PhD thesis (Who is marching for Pachamama? An intersectional analysis of environmental struggles in Bolivia under the government of Evo Morales. Doctoral dissertation, Lund University) she studied environmental politics in Bolivia through literature studies and fieldwork between 2009 and 2014.

** A longer version of this article originally appeared in Spanish on the 51th issue of the journal Ecología Política dedicated to Political Ecology in Latin America.

Leave a Reply to On Bolivia: For peace, democracy and indigenous-popular self-determination – Undisciplined Environments Cancel reply