Another take on gold mining

Gudynas: Thinking like Araucarias: development and conservation in other timescales 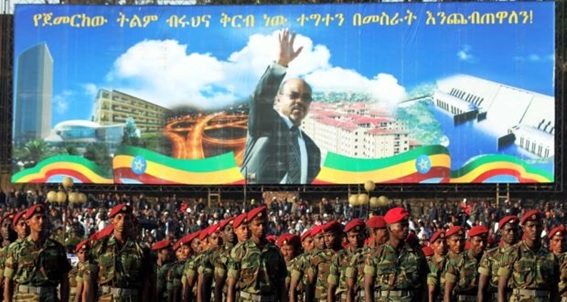 As fast-track growth overhauls the Ethiopian society, the regime is obliged to re-consider its recipe of mixed authoritarianism and development – as Franco’s Spain was.

On May 24 Ethiopia will celebrate its fifth parliamentary elections. A defeat of the incumbent Ethiopia’s People Revolutionary Democratic Front (EPRDF), in power since 1991, appears as highly unlikely. Such a defeat would see the opposition making a giant stride forward from its current unique seat in the chamber. That alone reflects the EPRDF’s deliberate efforts – in the 2010 elections, marred by credible allegations of intimidation and fraud – to avoid at any rate a repetition of the ‘accident’ of 2005. Then, the regime was inflicted a devastating and utterly humiliating loss in Addis Ababa. To halt the propagation of the malaise, the then PM Meles Zenawi decided to administer the country through authoritarianism and developmentalism in equal doses. Predictably Zenawi’s death in Brussels in 2012 did not change much and his successor Hailemariam Desalegn is imparting a recipe only marginally more developmental.

Developmentalism can hardly come as a surprise, given that high-modernism has since long been a constitutive feature of the modern Ethiopian state. Yet since the mid-2000s it has been colonizing – quite literally – larger and larger portions of the landscape. The first 5-year Growth and Transformation Plan issued in 2005 promised to overcome decades if not centuries of autarchy as well as open up the country to foreign investments. Since then, developmentalism has yielded 12,000 kilometers of roads, trebled existing electric generation capacities, and put the country on track to cut extreme poverty by half.

With infrastructures spreading across the country – as exemplified by the 6-lane expressway linking Addis Ababa and Adama, or the new tramway in the capital – regime propagandists have found a fertile ground. The political mobilization of infrastructures has nonetheless reached new heights with the mammoth Grand Ethiopian Renaissance Dam. The project, to be commissioned in 2017, envisages to add some 5,000 megawatts to installed capacities – by far the largest hydropower complex in Africa. Completing the dam has become so paramount to the regime’s legitimacy that when the World Bank refused to contribute funding to the estimated budget of 4.5 billion dollars, the government resorted to non-conventional measures: ‘voluntary’ contributions by public workers – up to one month of their salaries -, private banks, or Ethiopians in the diaspora. All in all, such a massive resource mobilization has thrust the Ethiopian GDP to skyrocket at an average annual rate of 10,9% over the last decade, a feat only paralleled in the 20th century by Japan, China and a handful of countries – including Spain’s overcoming of autarchy between 1959 and 1973.

The analogy with Francisco Franco’s dictatorship may not be so arbitrary, after all. If Franco – invariably wearing a hat – visited a reservoir every second day, Meles Zenawi did not shy away from such events. Between 1939 and 1975 Franco’s regime dug 600 reservoirs – thus catapulting Spain to the status of second worldwide in dams per capita. Franco inaugurating yet another reservoir came to symbolize the modernist project as much as the popular and nationally manufactured Seat 600. Yet reservoirs and dams also reconfigured the Spanish geography according to Franco’s own political grammar. To a certain extent, Meles Zenawi espoused a parallel agenda. Thereby, Zenawi also maneuvered to cement Ethiopia’s internal and external power on a geographical hydro-revolution – its power enshrined by a collection of dams equivalent to forty average nuclear stations. According to Zenawi’s calculations, developmentalism would yield the EPRDF’s regime an aura of legitimacy sufficient enough to make its most authoritarian traits tolerable; externally, massive exports of cheap power would confer Ethiopia the status of new regional hegemon – a condition also facilitated, lest we forget, by the second largest army in sub-Saharan Africa.

If the strategy seems to have delivered until now, its success remains however uncertain in the long term. Growth is certainly giving wings to an incipient middle class in Addis Ababa – and to a huge real-estate boom. Again, the top-down social experiment in Ethiopia reminds of the sociological transformations in Franco’s Spain engineered by Opus Dei technocrats – albeit this time the recipe seems to come from China. In today’s Ethiopia, social engineering entails, like it did in Spain in the 1960s, an economic openness that parallels political closure. Economically, the regime has tied its own fate to the consolidation of a middle class that may arguably lift the country out of poverty by 2030. Politically, nevertheless, since 2005 the governing party has either put opposition figures in jail or sent them into exile – not to speak of the persistence of regional armed movements. The controversial increase in the figures of the rank and file in EPRDF – by more than three millions – has scarcely obscured an ever-growing suffocation of civil society.

Despite such impressive numbers, the regimes continues to face a complicated dilemma. Either it softens its tight grip on society, and reluctantly consents to a controlled transition in alliance with the tiny urban middle class – the “Spanish way”; or, alternatively, it goes further down the authoritarian road, therefore probably triggering a new cycle of social contestation akin to those which in 1973 and 1991 deposed the imperial regime and the communist dictatorship, respectively. Whichever the choice, developmentalism and the relentless changes it is inducing in the Ethiopian political settlement will inexorably shape future electoral processes; yet probably not rapidly enough, though, to alter the results that everybody anticipates for the upcoming elections in May.