For a week in August part of the WEGO team gathered with other academics and activists of diverse places, ages and experiences in the beautiful convent of Bolsena in Italy for a feminist methodologies writing retreat

Since 1993, the feminist activist group Punti di Vista have been experimenting with community living in the convent, and have created cultural space for groups interested in sustainable futures to convene. By living and learning together in and around the convent, we were able to go beyond thinking about feminist methodologies at a theoretical level and were able to experiment with practicing feminist political ecology and doing academia otherwise. 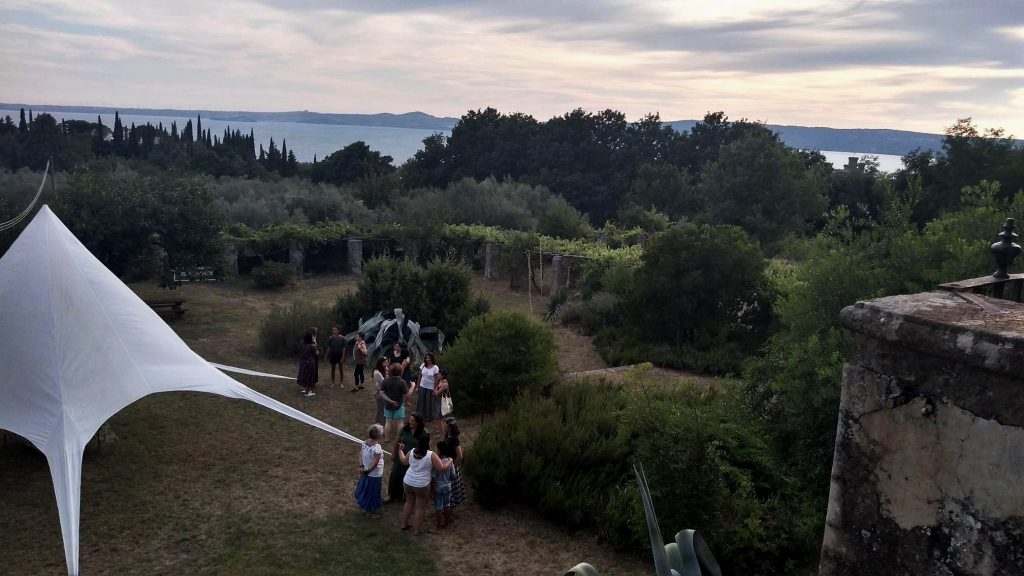 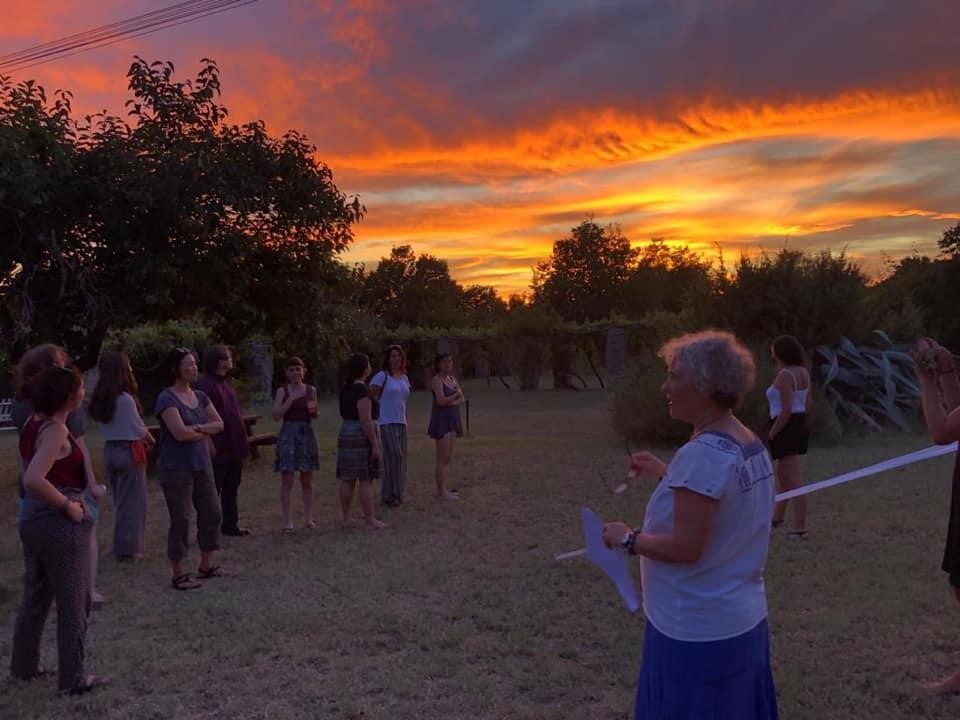 After getting to know each other informally as the sun set over the convent garden, the week began formally by taking time to recognise the goals, work and emotions we were all bringing to the gathering. Here we began to weave our threads of connection between each other, and by nourishing our crossovers and entanglements we found different senses of belonging with different people. With some we found we shared concerns and insights about our particular academic stages, concerns and theoretical occupations, with others we could share our enthusiasm for creativity, nature, yoga, swimming, wine or gelato, and with others we found a shared sense of humour. These points of intersection led to an organic programme for the week, comprising of morning sessions in

which creative methodologies for exploring the set readings were offered, and a loose afternoon programme in which we could propose workshops, read, write, create or swim. 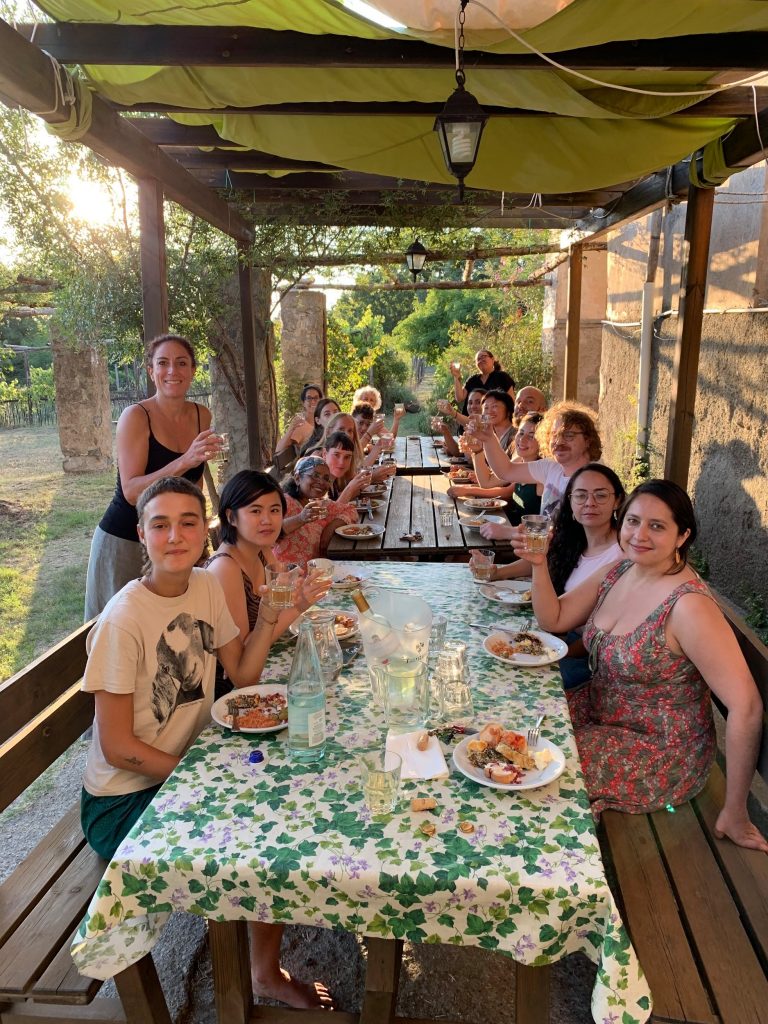 To bubbles – in all their forms!” 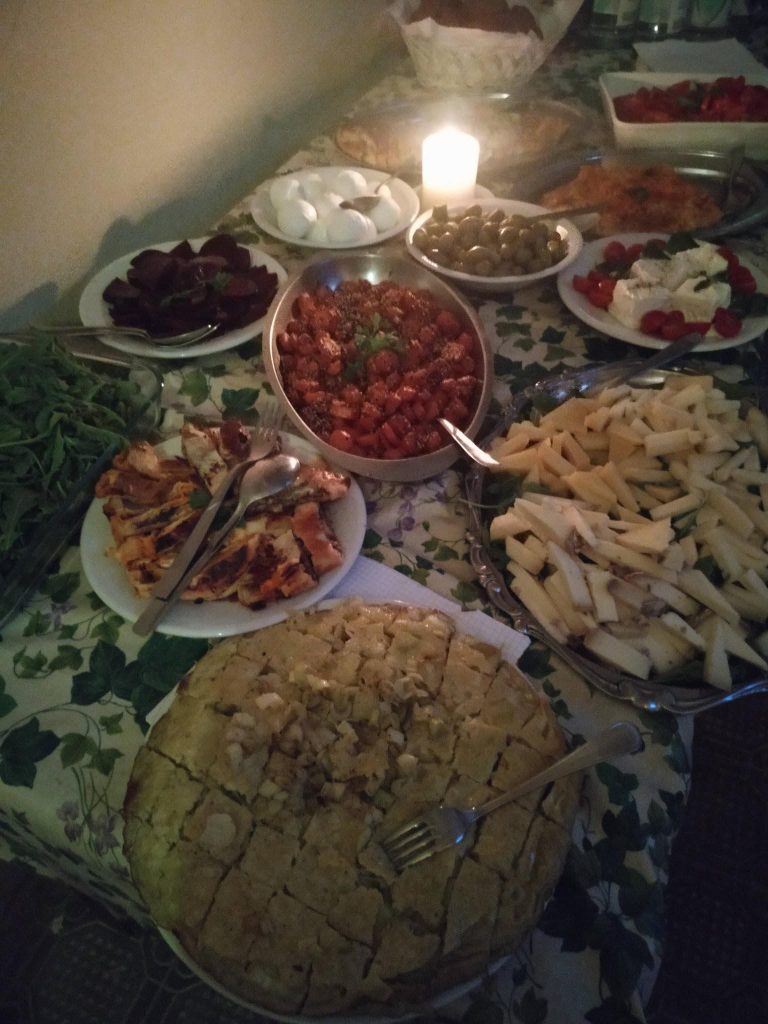 Part of the process that we particularly appreciated was this in-built fluidity. We could call it a deliberate un-plan, in the sense that while there was an overall framework, the days felt serendipitously planned with some of us stepping in with methodologies for how to carry out each conversation. Discussions held in the early days snowballed and split into other sessions, workshops and moments. Therefore the needle threaded itself across the days, meals, swims and workshops, with these led by young scholars and activists that helped neutralise the notion of expert.

We lived the environment built in the convento as a great unshackling. We were comfortable to feel vulnerable amongst a group made up of MA students, PhD students, post-docs, professors and activists. We could share our experiences, anxieties and worries, but also listen to others’ own happy moments and uncertainties. By addressing issues such as intersectionality and positionality, we were able to address it within ourselves too. The programme of the week realised our shared aspirations for community, co-production, creativity, conviviality and care. While many of us have become familiar with these concepts in an academic dimension, by experiencing them in action we were able to deepen our understanding and conviction.

With such a diverse, engaging and often emotional programme, it is hard to convey the entirety of what we learnt! Here are a few of our personal highlights along with brief descriptions of the methods we explored:

The premise of the walkshop is that we can think differently (perhaps better) when we are walking and reflecting together than when we are sitting around a room talking to each other. Having all read

Aimee Carillo Rowe’s piece “Be Longing: Towards a Feminist Politics of Relation” beforehand, we slip off into groups of 3 or 4. Each group had the same starting and end point and an hour and a half to walk and talk through two questions. We came back together as a larger group to have a shorter reflection. For a more detailed discussion of the method, see Melissa Leach’s blog post.

Constance: “I found the walkshop such a great way to have a conversation. The article we talked about/through/around during the walk was one that I had been trying to digest for many months and I was blown away by both the breadth and the depth of our meandering discussion. I was particularly aware of the fluidity of this way of sharing.

It was a beautiful way both to connect with those I shared the walk with and the text itself.” 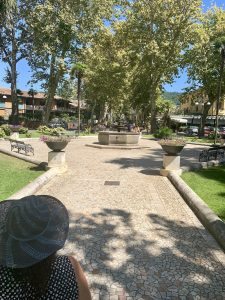 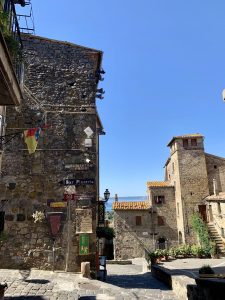 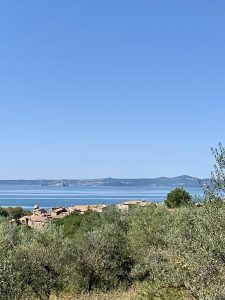 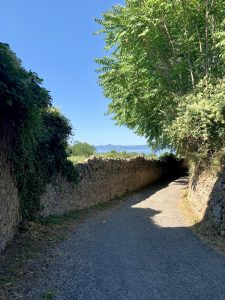 Snapshots along the walkshop, getting to know Bolsena in another way

The Psychodrama workshop was led by one of the participants, who had experience with the method, to help us think through both Nira Yural-Davis’ piece “Intersectionality and Feminist Politics” and Sara Ahmed’s blog post entitled “White Friend”. The facilitator led a collective exercise which provoked a strong emotional response for many of us. We then broke off into smaller groups to create living tableaus. Nick is reflecting on his group’s living tableau.

Nick: “The intersectionality session had us try making body sculptures. I was thrilled by my group’s idea of integrating the convent landscape into our discussion of human – non-human – more-than-human issues when thinking in an intersectional manner. Adding a few flowers, twigs or sheaves of wheat into our hair and beards blew into arranging sculptures with ant-filled persimmons, cicada shells and burst passion fruit. Spontaneity and child-like play made me think more about the wider existences outside of my own corporeal self and how they link to me physically and conceptually.”

Anna is reflecting on another living tableau that came out of the psychodrama workshop.

Anna: “Standing outside in the beautiful garden of the convento, we took each other by the hands and dynamically enrolled ourselves in a spiral. I happened to be at the inner end, the center, and while standing there I spontaneously said “I feel like in the eye of a feminist hurricane”. A gentle and

care-full hurricane though, unlike the devastating ones destroying peoples’ lives and lands in other parts of the world. A feminist hurricane grounded with our feet on the earth, embodying slow reflection at its center but aiming to whirl up the practice of traditional academia. And also a hurricane not actually composed of an all-viewing single eye at its center but formed of a collective of bodies-hearts-minds-subjectivities with multiple eyes and consciously partial perspectives.

After the walkshop on Monday morning, some of us gathered for a discussion on how to write more creatively in the academic context. We sat and discussed our inspirations and concerns, but before long it was evident we were all itching to actually create rather than just talk about it. We spontaneously decided we would co-write a poem by each writing a line, folding the paper over and passing it on. Meanwhile, we sat quietly and each worked on a drawing to reflect on the experiences of the morning’s walkshop.

Alice: “I often find I don’t give myself the time to sit and slowly reflect in this way, and I found that through engaging in a creative act and visualising academic thought the abstract can become more tangible and relatable. Even rarer is to share these kind of intimate reflections without being overly self-conscious, and in doing so we were able to find many connections to enrich our ideas. Amazingly some people had drawn on very similar abstract imagery to represent their different walks, and myself and Constance had unknowingly reflected on the same moment of our walk together. This shared space of creativity and sharing kept recurring through the week, sometimes in more playful ways such us in our reflections on the micro-politics of fieldwork.” 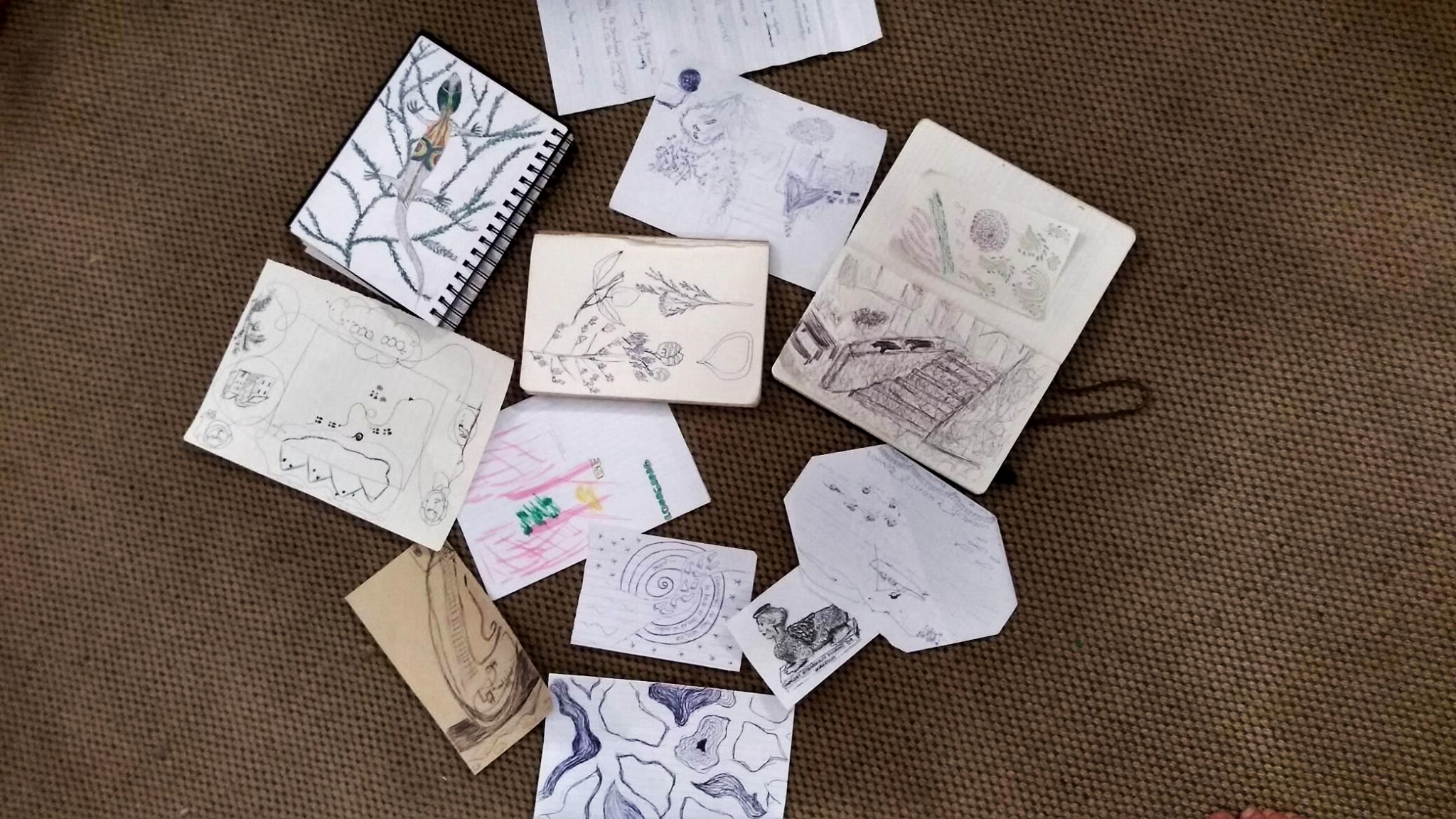 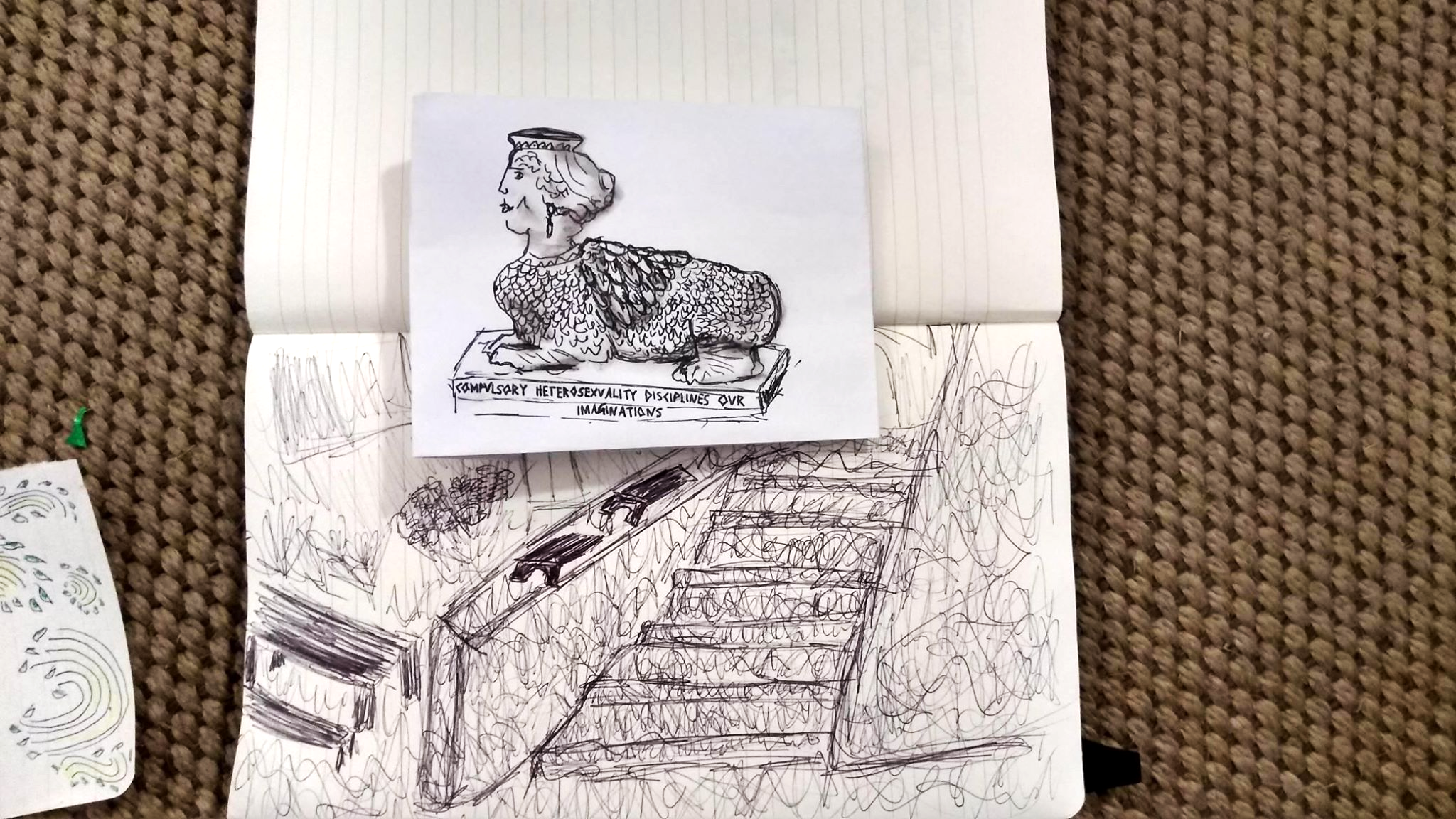 Artistic Responses to the Walkshop 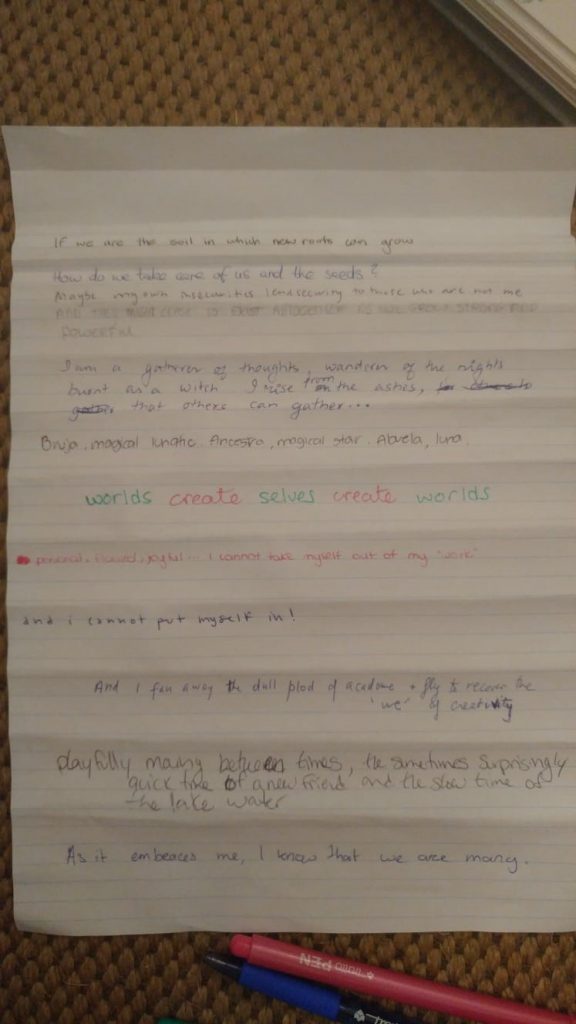 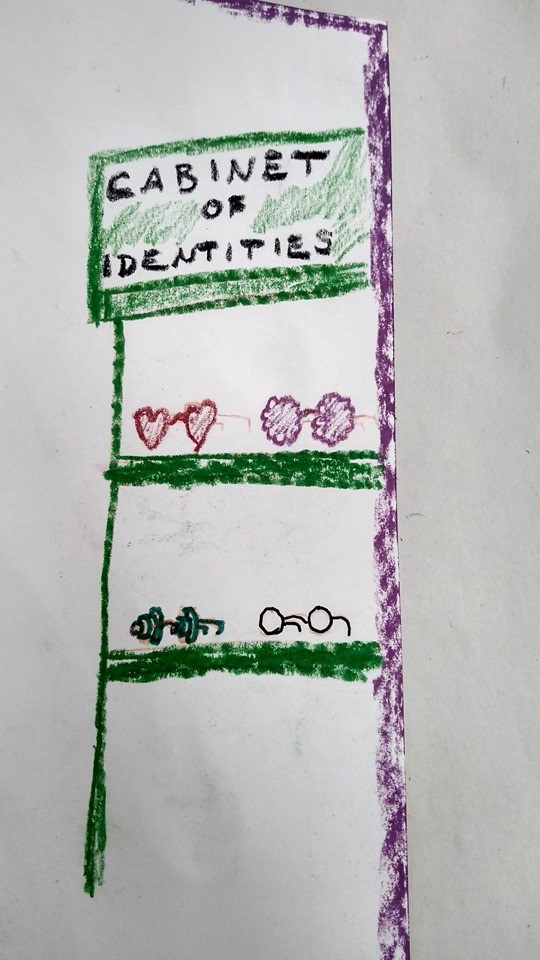 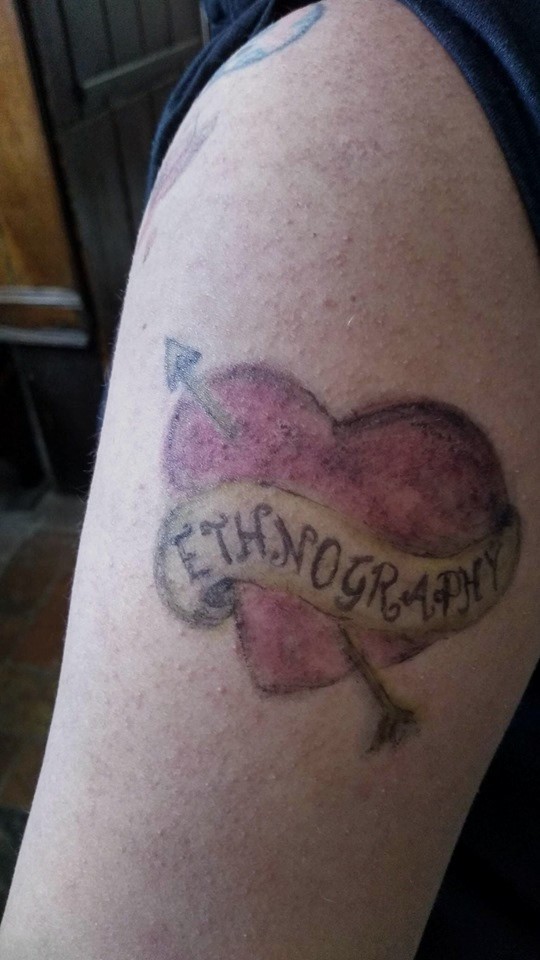 After an inspiring and memorable week together, we are already looking forward to being at the convent for two weeks next year for our next WEGO training lab and hopefully another writing retreat too! 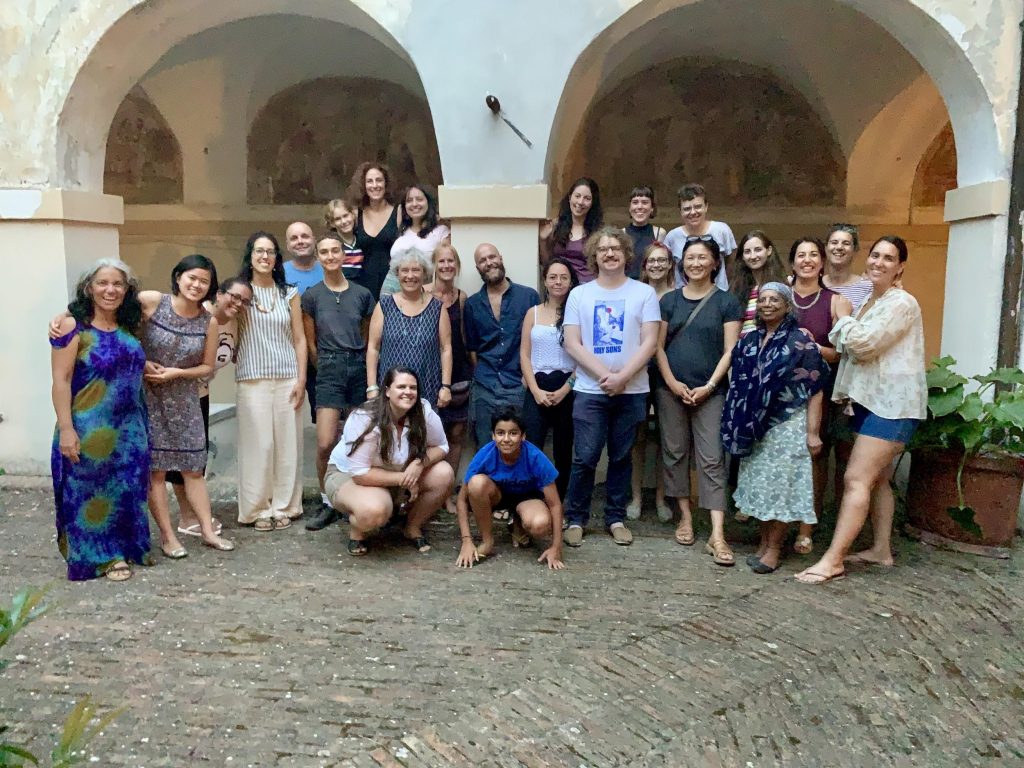 Alice Owen, Anna Voss, Constance Dupuis and Nick Bourguignon are four of the PhD candidates who form part of the feminist political ecology network “Well-being, Ecology, Gender and Community – Innovative Training Network” (WEGO-ITN). They have received funding from the European Union’s Horizon 2020 research and innovation programme under the Marie Sklodowska-Curie grant agreement No. 764908.