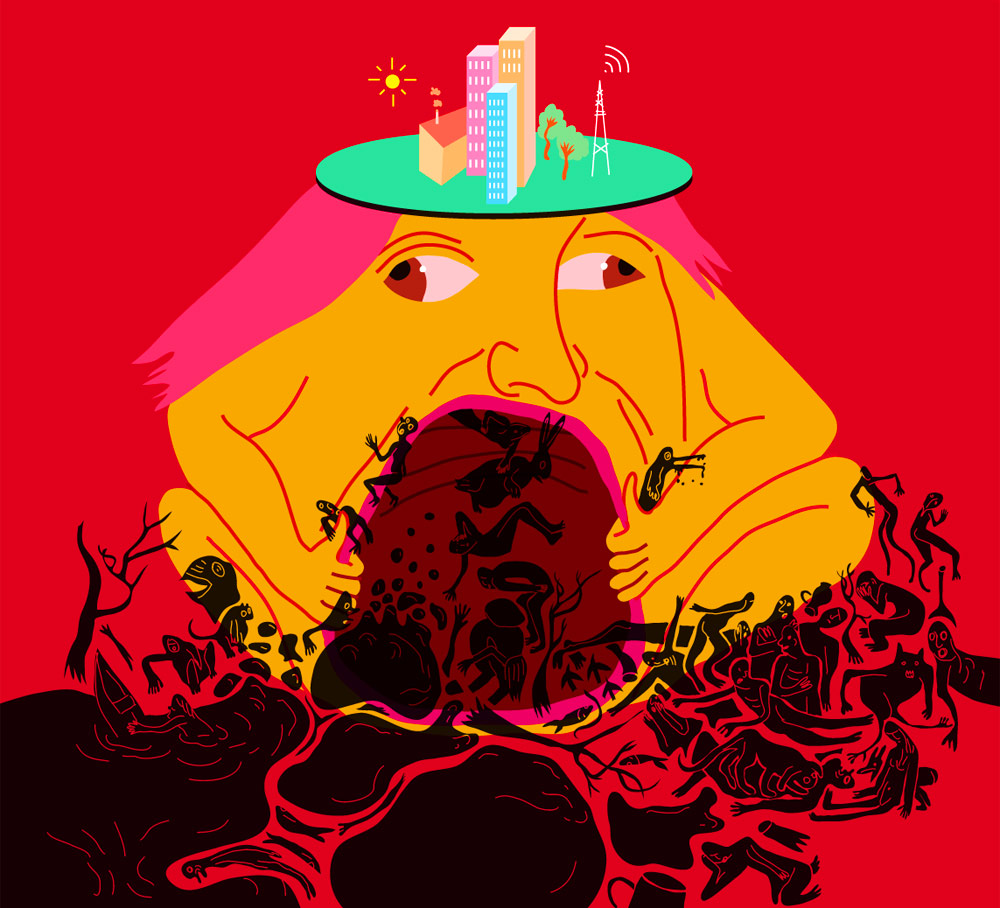 By Gustavo García López*
Saskia Sassen (Professor of Sociology, Columbia University) argues that the foundational transformation of capitalism since the 1980s is dominated by a speculative and extractive logic, characterized by “predatory formations” such as vulture funds making cities of ‘dead buildings’ and peripheries of expelled people.
In her recent keynote speech at the  16th Biennial Conference of the International Association for the Study of the Commons in Utrecht, Netherlands, Saskia Sassen offered a keynote speech on the “Extractive logics in our economy: geographies of expulsion” (see the video here).

Sassen’s talk began by situating the emergence of the current extractive logics –which are evident in natural resource sectors such as mining and forestry but also in digital corporations such as Facebook and Google— in the “foundational transformation” of capitalism that has occurred since the 1980s’ deregulation and privatization of the global economy.  This “new epoch” of what she called an “ironic capitalism” is characterized by a complete lack of interest in even a marginal well-being of the labor force or of the communities impacted, a substantially reduced accountability of corporations, and the emergence of “predatory formations” . It is, as she explains in her book Expulsions, a shift from valuing people as consumers to extracting value through a proliferation of complex instruments.
In her recent paper, “Predatory formations dressed in Wall Street suits and algorithmic math”, Sassen has described these formations as systemic in character and based on “assemblages” of complex core elements of knowledge and technologies from key domains and capabilities of our societies. These include algorithmic mathematics, law and accounting, and high-level logistics. Such assemblages install themselves within the physical and institutional infrastructure of nation-states, having a single purpose: the extraction of a maximum profit, as quickly as possible. This, in turn, dramatically changes territories and lives, as dramatized by Sassen’s examples of the complete disappearance of the Aral Sea –one of the biggest internal seas in the world– in two decades (1989-2009), and the drastic reduction in Greenland’s ice sheet.

One of the most important predatory formations is what Sassen terms “high finance”. For her, this, and not the ‘digital sector’ as is typically claimed, is the “steam engine” of this new epoch of capitalism. This high finance predatory formation “sells something it doesn’t have”, and is composed of different operations, of which Sassen discussed two: credit default swaps and vulture funds. Credit default swaps are investments in risky loans –such as “subprime mortgages” behind the 2007-2008 housing crisis– which are remunerated if they default. As Sassen argues in her “Predatory formations” paper, the aim of this instrument, developed in the 2000s, is not to expand access to housing, but rather “to use the actual physical good (the house) to develop an asset-backed security” which could then be “spliced into multiple bits (to expand the number of such securities), mixed with high-grade debt (to ensure a good rating) and deployed immediately, that is, sold to investors”. In the talk, Sassen underlined the astonishing growth of these formations: the total global value of credit default swaps went from $19 billion in 2001 to $62.2 trillion USD in 2007, higher than the combined GDP of all countries in the world. Thus, as she points out in her paper, subprime mortgages have turned urban space –and especially low-income neighborhoods– into spaces of extraction well beyond the gentrification mechanism, a kind of primitive accumulation.
A second type of operation discussed by Sassen is that of “vulture funds” –a type of hedge fund which speculates with debts considered to be distressed or in danger of default (amounting to a bet that the debtor will default)– which she further analyzes in “The Vultures of Wall Street”. Sassen showed how funds have been acquiring huge amounts of the debt of countries across the world, and receiving dramatically increasing returns on these ‘investments’. She provided the dramatic example of Elliot Management, owned by billionaire Paul Singer, which has made “wild” profits on multiples countries’ sovereign debt: $35.5 million in Panama, $46.6 million in Peru, $70 million in Congo, and potentially more than $2 billion on Argentina’s debt (pending). Hedge Clipper further reported that Elliot Management is expecting an estimated 1380% return on its initial investment.

The impacts of these transactions on the countries involved is unquestionable, especially when they turn to dramatic austerity measures to pay what many consider an illegitimate and illegal debt. In the talk, Sassen reflected on how these predatory formations together are changing urban space, dramatically and quickly.  Mortgages were a key cause of the 2007-2008 housing crisis in the United States (also known as the “subprime mortgage crisis”) which led to 14.5 million US households losing their homes in a decade. One of the outcomes of this has been an emptying of prime, centrally located urban land. This, in turn, has created ‘opportunities’ for a third type of high-finance predatory operation: shell (ghost) companies investing in real estate for ‘luxury developments’. She noted the dramatic growth of foreign investment in big cities across the world, such as London, New York, Paris, Tokyo, Amsterdam, Madrid, Shanghai, and Los Angeles. The foreign investment in existing properties between 2013-2014 across the world reached $55 billion USD in the top 100 cities, while in 2014-2015 it increased significantly to $1 trillion USD (for more details, see Who owns our cities – and why this urban takeover should concern us all). Today, worldwide real estate assets are nearly 60% of the value of all global assets. Close to 65,000 buildings have been purchased by foreign shell companies between 2005 and 2014. For instance, in London, one Chinese company has bought hundreds of historic buildings, while the Qatari royals own more of central London than the Queen of England.
Sassen made clear that this is not about developing housing for current needs, but rather about investing in owning land for speculative purposes. As a result, many of the buildings being bought are empty. In the Bloomberg Tower in New York, for instance, 57% of condos are owned by ‘shell’ companies and currently do not have residents. These  “global cities” are produced by and for global corporations (particularly in the financial sector), which despite being highly digitized, need ‘central places’ –perhaps more than ever before– where they can access a whole set of complex specialized services. These cities are thus increasingly marked by the production of extremes: a city center ‘densely urbanized’ but filled with “dead” corporate buildings, and an expanding periphery of those expelled from the center in the name of “upgrading” “modernization”. Sassen noted the similar processes occurring in rural areas, where “land grabbing” kills land and people for mining, large-scale agricultural plantations, dams, and other development plans.

Sassen’s talk strongly resonated with the current situation in my country, Puerto Rico, which has a deep crisis and massive $70 billion USD debt. Vulture funds have purchased almost 25% of this at highly discounted prices, and are expecting billions in profits, while they actively lobby for deep privatization, deregulation, public layoffs and spending cuts. Nearly half of the debt could be illegal, yet the current government refuses to carry out a debt audit. By 2015, almost 15,000 home mortgages were at risk of default, and more than 7,000 households had lost their homes (repossessed by banks) with a value of over $560 million USD. Between 2009 and 2015 there were more than 60,000 court actions for eviction.
What to do to counter these extractivist, predatory processes? Sassen concluded by arguing that the potential to do so lies in the struggles of the expelled at the frontiers of urban areas, the sites of encounter of actors from different worlds where there are no established rules. It is the space where those without power get to “remake history”, where marginal people that have been invisibilized remind us that they are present: “estamos presentes”. Thus, argued Sassen, we should strive to keep alive these frontiers, these flexible spaces in cities, where people can make and remake their own economies, relations, lives.

Platform for Mortgage-Affected People (PAH) occupy the streets in protest against against evictions and for the right to housing. Source: PAH

While Sassen did not go into detail into this argument about remaining present, it is reminiscent of Judith Butler and Athena Athanassiou’s proposition in their book Dispossession. Butler and Athanassiou discuss how when the dominant norm is the continuous destruction of territories and lives – dispossession for the purpose of capital accumulation, as seen in the increasing assassination of indigenous and peasant land and environment defenders across the world – staying ‘in place’ through assembly and continuing to exist become a radical, counter-hegemonic act. However, this staying in place is a collective process: it requires a politics of assembly and a process of resubjectivation, that is, challenging dominant subjectivities and practicing new ones. As fellow ENTITLE writer Melissa García Lamarca has shown in her analysis of the Platform for Mortgage-Affected People (PAH) in the Barcelona metropolitan area, people with ‘mortgaged lives’ can transform into new, subversive political subjects through collective processes beginning with deliberative assemblies and developing into direct actions such as blocking evictions, occupying banks and squatting empty bank-owned housing.
* Gustavo García López is an Assistant Professor in Environmental Planning at the Graduate School of Planning, University of Puerto Rico – Rio Piedras and a member of the ENTITLE collective. He works on the politics of collective action in commons and environmental movements.
Share